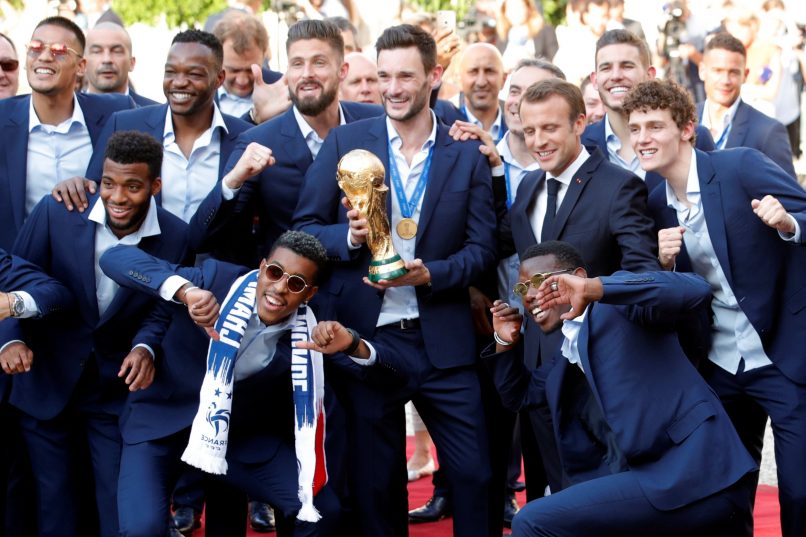 For Griezmann, this is his second podium finish after achieving the same feat in 2016. This time, though, he has right to feel more aggrieved to miss out on the top prize. A scintillating World Cup victory, including four goals throughout the tournament and a man of the match performance in the final, put the cherry on top of his Europa League and Super Cup winning season at Atlético Madrid.

His slow start to the 2017/18 season attracted a lot of criticism, but from January, Griezmann was on fire. He scored in every knockout round of the Europa League, and notched 12 goals in two months in the league for Atlético. At the World Cup, three of his strikes came after the group stage. It appeared that his performances in important matches would lead to the Mâcon born striker breaking the decade long duopoly of Ronaldo and Lionel Messi.

Alas, Modric’s heroics in dragging his country to the World Cup final, alongside his part in Real Madrid’s third consecutive Champions’ League victory, saw him gain the votes required to win the accolade, selected by some of the top global journalists in football.

Griezmann was disappointed not just that he didn’t take home the top prize, but also that a Frenchman wasn’t victorious. He indicated that“it would be a shame”if a World Cup winner missed out adding with a hint of sarcasm that “maybe the Champions League and a league title is more important that the World Cup”in several interviews in recent months.

Another Frenchman who received widespread support for the award was Modric’s club teammate Raphaël Varane. He was a key cog in Real Madrid’s European success, and pipped the Croatian at the final hurdle by winning the World Cup final. Not only that, but he was the one that cracked open the notoriously stubborn Uruguay defence in the quarter-final, to see France through that tricky tie, as well as being their outstanding defender throughout the tournament.

Defenders seldom gain as much praise as attackers, and perhaps Varane can feel aggrieved on those grounds: Franz Beckenbauer and Fabio Cannavaro are among the only defenders to have won the award in its 62-year history, and the latter is the only defender to even make the top three in the last 15 years.

To add insult to injury, winning the Champions’ League and World Cup in the same year is a feat that has been achieved just four times in the last 44 years once of which was by Roberto Carlos in 2002, who was rewarded with a second placed finish. Varane must be asking himself what more he has to do to make the podium, never mind win the award.

Even Diego Simeone, manager of Real Madrid’s bitter rivals Atlético, claimed that either Varane or Griezmann were more worthy than Modric of the award.

It wasn’t all bad news for the French as Kylian Mbappé won the inaugural Kopa Trophy, a new Ballon d’Or equivalent for players aged 21 and under. The Paris Saint Germain forward won convincingly, with almost three times as many votes as the second placed player, Christian Pulisic. To add to his individual accolade, Mbappé also finished fourth in the overall Ballon d’Or rankings and will be dreaming of hitting higher heights in 2019.

As for the rankings in the top 30, Les Bleusmight have wished that more of their squad were considered. Griezmann (3rd), Mbappé (4th) and Varane (7th) clinched top 10 spots, but Ngolo Kanté (11th), Paul Pogba (15th) and Hugo Lloris (joint 29th) were the only other World Cup winners to make the list, with Karim Benzema finishing joint 17th.

Samuel Umtiti may be the most disappointed to have missed out on the list from Didier Deschamps’s team. His partnership with Varane in Russia was vital to France’s four clean sheets in the tournament, and his Barcelona side lost just once in their league season, conceding 29 goals. Additionally, he scored the winning goal in the hard fought semi-final against Belgium.

All in all, Griezmann and Co. may feel slightly aggrieved, but won’t look back with too many regrets. The Atlético Madrid striker told a reporter with a wry smile that he wouldn’t change the World Cup for the Ballon d’Or and it’s hard to imagine his countrymen disagreeing.

At the end of the day, the fact that France had multiple outstanding talents in 2018 who were considered for the award might simply explain why one of them didn’t take the prize – they took votes away from each other.