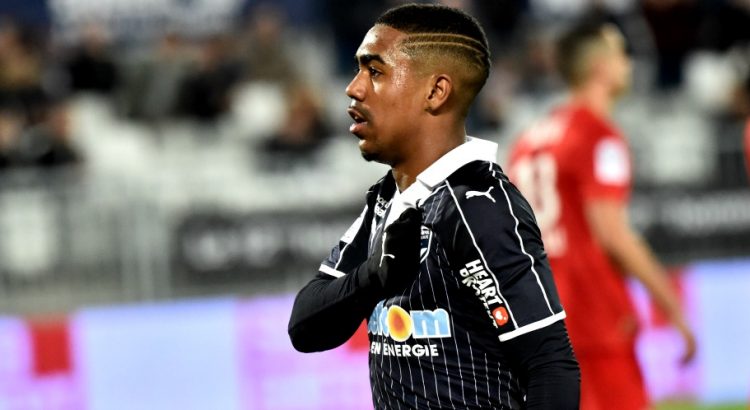 Goats are becoming a common sight in French football. Being labelled a “goat” carries connotations of severe incompetence and was best illustrated by Marseille fans who held huge pictures of goats in the Velodrome stands, mocking their team’s abject form two seasons ago. The fact that prominent Bordeaux fan website “Girondins4ever” have plastered their Twitter profile with a team of goats, the iconic Bordeaux chevron emblazoned on their chests, illustrates the unfolding disaster at the Stade Matmut Atlantique.

Les Girondins’ 1-0 Saturday win at promoted Troyes was only Jocelyn Gourvennec’s charges second since a demoralising 6-2 thrashing in Paris last September and it proved once again, that without Brazilian starlet Malcom, they could yet be in real danger.

As veteran Czech midfielder Jaroslav Plasil trudged from a sodden, windswept Stade Louis Dior pitch as Bordeaux’s third sending off in an embarrassing 2-1 defeat to semi-pro fourth division club Granville last weekend, Bordeaux had rarely been so low; the calamitous loss only served to compound the misery of a league campaign that had promised to be their best since winning the Ligue 1 title in 2009 but has become a relegation battle.

Floundering in 15th at the winter break after just five points in the fourteen games before the trip to Troyes, the most astonishing aspect of Bordeaux’s demise remains Gourvennec continued presence as coach.

Unrelenting pressure from the media and supporters forced club president Stéphane Martin into a publicly addressing concerns but he avoided blaming Gourvennec’s lingering tenure for the deterioration despite acknowledging the dire situation. “We are in an unprecedented crisis.” Martin said, “We must stop talking about the situation of Jocelyn Gourvennec. All these questions about his fate, frankly, it becomes morbid.”

Martin’s apparent defence of his manager may turn out to be a thin one with Le Parisien reporting last week that the ex-Guingamp coach, Gourvennec took the small Breton club to Ligue 1 mid-table and the Europa League knockout stages after a glorious Coupe de France win in 2014, had until the end of the month, or even the end of the week, to prove his worth. Former Club Brugge boss Michel Preud’homme supposedly ordained as his successor, a loss to follow strugglers Troyes could have been Gourvennec’s last. The 45-year-old, aware of the pressure, refuted this; “I did not receive an ultimatum for the match in Troyes,” he explained, “although I know how important it is. I do not ignore the situation. I hear the discontent.”

Les Girondins’ vociferous core fan-base however were not so lenient. Prominent supporters group, The Ultramarines, released a damning statement even before the loss to Granville, affirming: “We will not stop our movements of protest and we will continue to ask for the resignation of the coach, who is no longer, for us, the man of the situation.” Further disenfranchised following the cup exit, the police were employed to supervise 20 of their number who berated their manager and players at the club’s Monday training session. Martin nevertheless again came to Gourvennec’s defence; “I think Jocelyn is clearly not the right target,” the President protested, “we’re convinced that Jocelyn is doing a good job.”

Since the humiliation in Granville, however, sparks of hope have finally started to appear. Centre back has been a problem area for Gourvennec all season, an attempt to permanently convert Jérémy Toulalan proving fruitless, making the acquisition of Paul Baysse from Malaga, superb for Nice in recent years, a crucial one. Meanwhile the loan signing of powerful defensive midfielder Soualiho Meïté from Monaco added significant weight to what had become an increasingly brittle spine. Both were stoic in the stabilising win over Troyes. Brazilian winger Malcom however remains Gourvennec’s strongest life line.

A superb first half run and dinked cross from the 20 year forward proved to be enough for the Bordeaux win, Gaëtan Laborde gleefully heading home, as once again Bordeaux’s attack heavily relied on the flare, power and pace of the stocky forward. Without him, Gourvennec would likely have been sacked well before Christmas as Malcom was largely responsible for the miserly five points his side have eked out since their thrashing in Paris. A clinical equaliser against Nantes, orchestrating play in the draw with OM and a thunderbolt in the win over St Étienne all proved pivotal.

Despite his clear superiority in imagination and technical ability, Malcom can lack consistency and despite his highlight reel hinting at the potentially world class player within, a continued stay in France could be crucial for his development; his tendency to drift in and out of games is a frustrating one. A fearful Martin meanwhile has no intention of letting him go just yet. “We are not going to separate from our best players, given our emergency situation.” he told L’Équipe “On paper, we do not have a team to go down. But, the reality is our margin relative to the relegation zone is low.”

Gourvennec’s reign is still precariously hanging in the balance and even with Malcom around to rescue him, a lack of goals from €10m striker Nicolas de Préville, an absence of pace or cohesion at the back and weak midfield creativity are huge problems. A corner may have been turned but Gourvennec and Malcom are far from moulding Bordeaux’s “goats” into an outfit assured of Ligue 1 survival. Should their Brazilian talisman be sold and a stubborn persistence with Gourvennec continue, the unthinkable could yet happen.

1 | Last season, Guingamp faded badly after a strong first half which included victories over Marseille, Lyon and PSG, eventually finishing tenth. Could this season’s edition be readying a reversal of that form? On recent evidence, the answer may just be yes, as the Breton side have won four of five in the league to move to seventh, just a point behind Nice. In Friday’s 2-0 win over Strasbourg, Nicolas Benezet was at the heart of the visitors’ thrilling play on the counter, playing a central attacking role with aplomb. If the former Nîmes man can stay fit, Antoine Kombouaré’s could find themselves back in the top six at season’s end.

2 | Montpellier and Monaco played to a scoreless draw in Saturday’s multiplex, but the match was hardly dull, with both goalkeepers producing several strong saves. Montpellier, rather than exhibiting the dour play one usually associates with them this season, gave as good as they got against the champions, with Junior Sambia impressing in midfield. Having moved ahead of Stéphane Sessegnon and Paul Lasne in Michel der Zakarian’s pecking order of late, the Niort loanee has added a dynamism that had been sorely lacking. Still just 21, Montpellier will be eager to tie him to a permanent deal, but may face stiff competition given how he has impressed of late.

3 | With Monaco dropping points, Lyon were unable to seize the opportunity to move into second, only drawing 1-all at home to Angers. Le SCO were good value for the draw, but the absence of Mariano Diaz was keenly felt as youngsters Myziane Maolida and Amine Gouiri are still too raw to affect a match the way the former Real Madrid man can. If Lyon had not been inclined towards doing business this January, their patent need for a striker may soon change that.

4 | PSG limply overcame a combative Nantes side 1-0 at the Stade de la Beaujoire on Sunday night through an Angel di Maria goal, but referee Tony Chapron stole the headlines. In a bizarre sequence of events, Nantes defender Diego Carlos inadvertently ran into the back of the official in the final minutes of play, knocking him over, only for Chapron to stick a leg out in retaliation in an attempt to trip the Brazilian up. He then followed that inexplicable act up by showing Carlos a second yellow card, for no apparent reason.