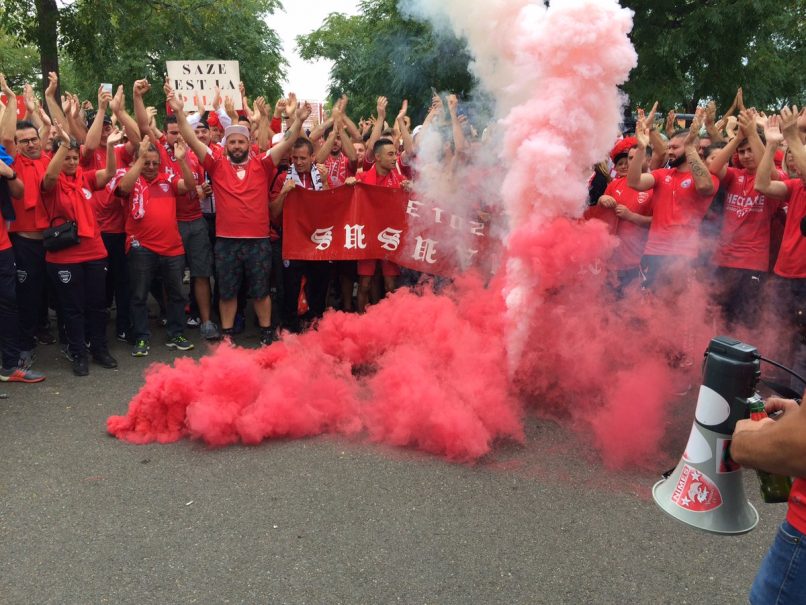 Although Montpellier’s Stade de la Mosson was unusually packed for the derby visit of newly promoted local rivals Nîmes on Sunday afternoon, the Tribune Heidelberg, home to Montpellier ultra-group Butte Paillade 91, was missing its most prominent incumbent. A banner which bears the group’s name and usually sits proudly above the lower tier had been stolen. However, with ten minutes remaining of what had been a ferocious Montpellier display, striker Gaetan Laborde heading the home side into a 3-0 lead, the missing banner reappeared, but at the other end of La Mosson.

Until this week, La Derby du Languedoc between southern neighbours Montpellier and Nîmes had been largely forgotten by those outside the usually Rugby dominated south-western region. Fierce rivals traditionally, underlined by the 400 police on hand yesterday, the two clubs had not met in Ligue 1 for 25 years or in any competition for nearly a decade and that competitiveness would reemerge as reports emerged on Thursday that Nîmes’s rival supporters group, ‘The Gladiators’, had acquired Butte Paillade 91’s cherished banner.

Tensions between the two groups had been simmering for some time. L’Équipe reported this week that Nîmes fans were attacked by their Montpellier counterparts as they returned from a Ligue 2 trip to Lorient in May, supposedly a response to the Les Crocodiles’ faithful breaking into La Mosson last November. Subsequently Nîmes fans, other than the 605 sanctioned to attend by authorities, were banned from travelling, while those able to attend were given a police escort to La Mosson. Fears of violence outside the ground remained however, with a group of Montpellier fans chanting “kill them!”at a training session this week underlining why such security was employed.

Despite the years between derbies of this magnitude, past encounters carry a degree of mythos. Their most famous meeting came in 1996 Coupe de France semifinal when notorious Montpellier President Louis Nicollin famously stated he would return home on horseback should his Ligue 1 team lose to Nîmes. The latter side secured a famous 1-0 win and although he did not ride horseback through the streets of Nîmes, Nicollin’s comments did inspire a famous French pop song by Ricoune.

Less comically, with Sunday’s derby petering out, Montpellier fans attempted to vault hoardings behind the goal in anger as Nîmes’ support tauntingly unveiled a section of the stolen Butte Paillade banner, forcing riot police to block Butte Paillade’s advance at the foot of their stand, pepper spray at hand and utilised. This was the second delay that exceeded 10 minutes as, in celebrating Ambroise Oyongo’s first half opener, BP members had spilled onto the pitch as the fence that separated them from the Mosson pitch collapsed, injuring two. A scene horribly reminiscent of an incident at Amiens last season, in which 30 Lille fans were hurt.

Although the Gladiators’ banner theft may seem fairly innocuous at first, it’s a sign (alongside BP’s reaction) of an increasingly spiteful side of the French game as disturbances caused by ultra groups become increasingly common. Whilst incidents akin to Bastia fans attacking Lyon players as they warmed up before a game in Corsica two years ago are rare, both Marseille and St Étienne have been punished with stand closures in recent months for crowd disturbances. PSG were also sanctioned after their ultras (who have only recently been allowed to return to the Parc des Princes) tore up their end of Lyon’s Parc OL and as recently as two days ago, Angers supporters attacked a coach load of Guingamp fans. The LFP are in danger of allowing such incidents to become endemic.

Warring fans were supposed to mirror equally opposing styles of play at La Mosson. Montpellier, as Michel Der Zakarian sides typically are, remain one of Ligue 1’s more conservative and pragmatic outfits. Their defensive tactics often proving useful against the top teams but resulting in a lack of ideas against weaker ones. Nîmes, however, have proved to be the league’s most gung-ho outfit this season, only games involving PSG and Marseille have seen more goals in the first eight weeks, but only bottom side Guingamp have conceded more than ‘The Crocodiles’.

Despite Nîmes outplaying Marseille, fighting back from 2-0 down against PSG and somehow overturning a man and two goal deficit to win 4-3 at Angers, Montpellier led the way in Languedoc. Yesterday’s 3-0 win eventually, after La Mosson’s stadium announcer and several senior Montpellier players pleaded with fans not to continue their aggression for fear of punishment, put Der Zakarian’s charges into a Champions League spot. Nîmes, now winless in six, were surprisingly restrained for much of the encounter by an uncharacteristically aggressive Montpellier, led by outstanding midfielder Florent Mollet who dictated for long stretches.

Montpellier were fortunate, their visitors squandering a couple of clear chances, but their bullish display marked an evolution from last season’s over reliance on the counterattack that saw promising European hopes fade in April. Der Zakarian’s marauding wings backs and counter attacks remain but a pair of physical strikers in Laborde and Andy Delort, who tucked home a questionable penalty to make it 2-0, are supported by a genuine number 10 in Mollet, giving Montpellier some much needed cutting edge.

Although Montpellier President Laurent Nicollin insisted that no players were in danger, the LFP Disciplinary Committee meets today to discuss sanctions, a heavy fine likely the minimum. Either way, Michel Der Zakarian’s team proved that they have the firepower to produce their best campaign since winning Ligue 1 in 2012, with or without Butte Paillade’s trusty banner.

1 | Montpellier’s good form rightfully deserves top billing this week, but the team who had been provisionally second prior toLa Paillade‘s win also warrant a mention. St Étienne are still as defensively sound as they had been under Christophe Galtier, but the summer additions of Wahbi Khazri (four goals so far) and Yannis Salibur, along with Rémy Cabella’s loan being made permanent, have rejuvenated an attack that had grown old and stodgy. With no European football to distract, is it so far-fetched to think Les Verts could keep pace with the likes of Marseille and Lyon until the season’s end?

2 | Credit to Nantes, as well, for a fine performance against a somewhat listless Lyon on Saturday. Although it may have come too late to save Miguel Cardoso’s job,Les Canaris played as well as they have since a season-opening loss to Monaco in drawing 1-all the Parc OL. Ciprian Tatarusanu pulled off several fine saves, but the hosts’ Anthony Lopes had to be equally sharp. On another day, Nantes could have picked up three points, giving presumptive new boss Vahid Halilhodzic a very real chance of turning this season around after an underwhelming start.

3 | Finally, it seemed readers of this blog sensed an anti-Bielsa agenda, rather than a genuine wish to praise Lille in our first column of the season. There was nothing of that, but rather a wish to laud Christophe Galtier’s bright young attacking side. There was a minor wobble after the departures of Yassine Benzia and Lebo Mothiba, but Les Dogues‘ 3-0 demolition of Marseille leaves them a point clear in second, and they, like St Étienne, have no European football to stretch what is admittedly a thin  There is still much football to be played, but even with a slight over-reliance on Nicolas Pépé, Lille remain firmly a side to watch.