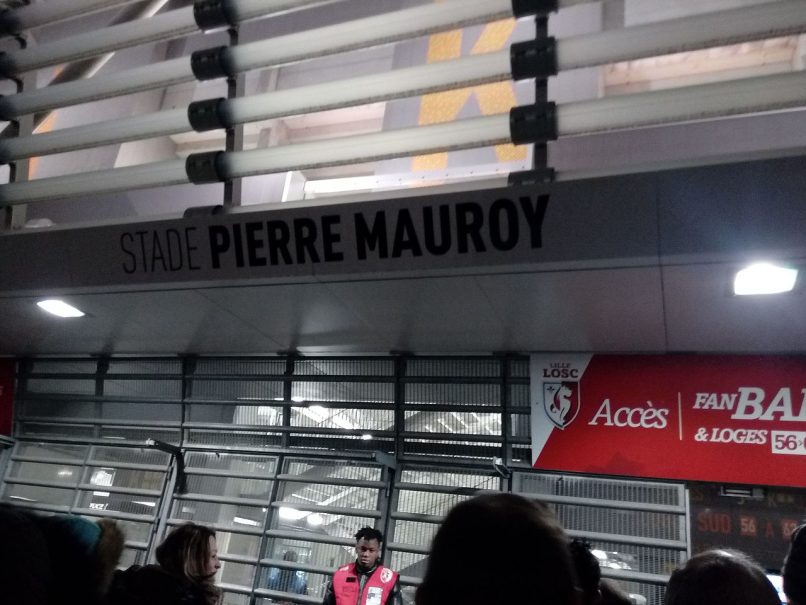 As Lille kept the likes of Marseille at bay with another cracking win this weekend, three points clear of their nearest rival in second place, a rival to PSG’s MCN has made themselves known in the form of BIP-BIP. A play on the Roadrunner’s signature “meep-meep”, owing to their pace and ability to evade defenders, the trio of Jonathan Bamba, Jonathan Ikoné and Nicolas Pépé have made waves, with Lille’s attack the league’s third-best. Lille are yet to face Lyon or Paris Saint-Germain, but they have recorded a comprehensive win over Marseille and Saturday afternoon’s 3-1 demolition of a normally organised Saint-Étienne was another feather in their cap, as Les Verts had arrived at the Stade Pierre-Mauroy in fourth place and having won three from three.

Bamba has been a fixture in Ligue 1 for some time now, having made his debut in 2015 at just 18, and has a wealth of experience with France’s youth sides. He came into his own last season whilst playing for Saturday’s opponent, and the club’s decision to bring in the likes of Wahbi Khazri, Rémy Cabella, and Yannis Salibur in the summer were largely in response to his decision to move to Lille on a free. His seven goals have already, after just nine matches, equalled his career-best, set last season, and with braces in each of the last two weekends, he is also proving his worth against Lille’s toughest opponents.

Ikoné has also burnished his reputation, after a fitful eighteen months on loan at Montpellier. Ikoné lacks the passing nous of the man whom he replaced, Yassine Benzia, but he has increasingly shown a willingness to be less reliant on his pace and to let the game come to him. It is Pépé, however, who has taken the league by storm this season. With six goals and four assists, he has been involved in more than half of Lille’s nineteen goals, and is a far cry from the player who struggled to get a game behind the then on-loan Bamba at Angers eighteen months ago.

Like many players to emerge from French football in recent times, including Ikoné and Bamba, Pépé comes from the Paris suburbs, but he started his career with Poitiers, then in France’s fifth division, impressing enough at the age of sixteen to be taken on board by Angers, and has been well-supported by his family along the way, as his father recently recalled to Onze Mondial. Pépé had always wanted to be a professional footballer, but even as circumstances often made things difficult, he and the rest of his family worked hard to support his son’s dream, and is still close to him:

“When I registered with Solitaire (a local amateur side), I also took a licence as a coach, and I accompanied him to training and to matches… …We follow him so he remains in the right frame of mind, so that he can achieve his objectives.”

Uncapped by France’s youth sides, Pépé’s progression was accelerated by a surprise call-up by the Ivory Coast in November 2016, for a match against France, but even then, the jury was still out, as he looked too often a mercurial talent for his club.

His arrival from Angers, then, in the summer of 2017 was seen as somewhat unremarkable, and perhaps even questionable, given the €9m fee. Pépé was of course, along with a host of other young players, signed at the behest of Marcelo Bielsa not for his achievements (he had scored just three times that season), but for his raw potential, even as, at 21, and with a moderately successful loan spell at Orléans behind him, he was seemingly fast running out of time to make the proverbial leap. Bielsa may have recognised Pépé’s talent, but he did little to foster it, using him as a central striker after the departures of Nicolas De Préville and Eder.

Pépé, a regular starter for the first time in the top flight, struggled to adjust to that role, and his profligacy made him a target for the fans’ ire as relegation continued to threaten the side, even after Bielsa was dismissed. However, with the arrival of Lebo Mothiba, Pépé was able at last to play alongside a natural striker, and his matches alongside the South African saw him become a devastatingly effective force as a right-sided forward, notching nine goals and five assists in the season’s second half; only Florian Thauvin and Memphis Depay were involved in more goals in that span in Ligue 1.

This season, only Neymar and Kylian Mbappé have been more decisive than Pépé, and while his success has been a long time coming, there was little doubt among those who saw him emerge that he would have his day in the sun. “It’s the culmination of the work he’s done,” reflected Abdel Bouhazama, reserve manager and academy director at Angers. Bouhazama was instrumental in getting Angers’ academy up and running as they earned promotion, and he regards Pépé as the “flag-bearer” in the club’s renewed focus on youth.

With interest from Barcelona and Arsenal coming in recent weeks it would be easy to imagine Pépé losing focus. However, in a recent interview with L’Équipe he stated that he has a clear “career plan” and is unfazed by attention from Europe’s elite, having rejected Lyon this summer. In recent weeks, his performances have been exhilarating, continuing his dynamic play by not only scoring but also playing provider in facilitating Bamba’s good form, something which augurs well for his future in showing that he can succeed without being the sole focus of his side’s attack. Whatever the future holds for Pépé, he and the rest of BIP-BIP have made Lille, so dire last season, Ligue 1’s biggest surprise, and there’s nothing cartoonish about that.

1 | Despite an uncharacteristically battling draw at Lyon last Saturday, Nantes’ president Waldemar Kita this week confirmed rumours that the game would be Miguel Cardoso’s last at the club, sacking the Portuguese as Les Canaris sat second bottom. Kita’s son Franck, Nantes’ General Director, had struggled to convince his father that Cardoso was the right appointment in the summer in the first place. Given his ideas were so far removed from those of previous coach Claudio Ranieri while also lacking the players to implement them, time was a necessity for most observers.

All but for a skeptical Kita senior that is. Worryingly, despite encouraging his team to ‘suffer’ more, incoming coach Vahid Halilhodzic’s, who managed Lille, PSG and Rennes around the turn of the century, presided over Nantes’ worst result yet, as they lost 3-0 at Atlantic derby rivals Bordeaux yesterday. “Coach Vahid”, as the Bosnian is known because of his tactical nous, is Kita’s 13th managerial appointment in an 11-year presidency. With Nantes already 4 points from safety in an extremely competitive bottom half, Kita’s perpetually itchy finger could finally prove the club’s downfall.

2 | As a rule, encounters between Ligue 1’s top four have, in recent times, matched or exceeded expectations. PSG home games, however, have proved an exception to this rule. Cauldrons at the Vélodrome and Parc OL are replaced with the oddly subdued, run-of-the-mill atmosphere that accompanies the quintessential Parisian stroll, despite their Ultras’ best efforts, while the matches themselves often play out in similar fashion. On this occasion, Paris’ Sunday night 5-0 thrashing of Lyon was enlivened by a degree of spite. Following a VAR review, PSG defender Presnel Kimpembe was rightly dismissed after an over the ball lunge on Tanguy N’Dombélé, before OL’s Lucas Tousart followed with a trip on Kylian Mbappé and a second yellow just before half-time, the score still at 1-0. Neymar’s yellow could also have easily been a different colour. As space opened up after the break, Kylian Mbappe’s 4 goals in 13 minutes made it 9 wins in a row, a French top-flight record, and maintained PSG’s 8 point lead at the top of the table. Ligue 1’s title race is already over.