Louis Saha: “From what I have observed, many women disappear when their husbands’ careers are over.” 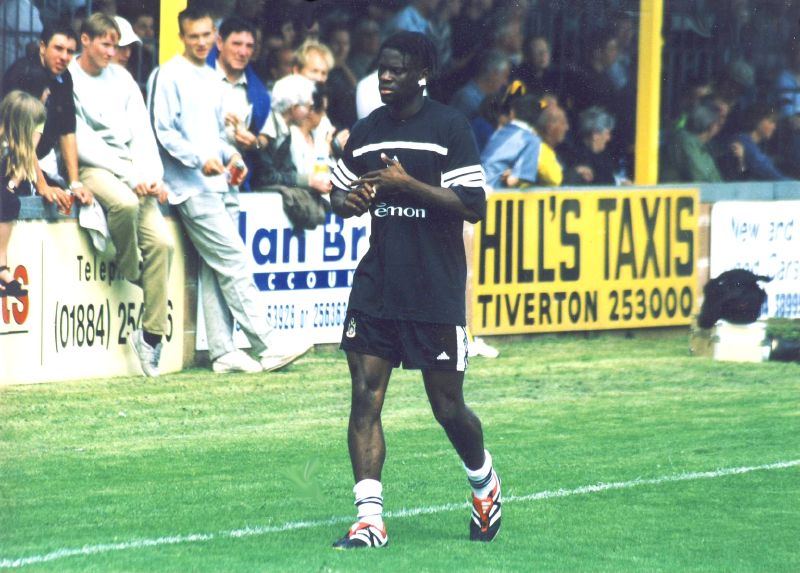 In an exclusive interview with L’Équipe Magazine, former player Louis Saha spoke in an illuminated fashion about the perils of the modern game.

Plenty of attention has been drawn to multiple former figures of English football going through bankruptcy. According to many reports, approximately half of Premier League footballers are confronted to difficult financial problems at the end of their career. Bad sporting decisions, terrible investments, fiscal scrambles, lack of maturity, divorces, gambling debts, greedy entourages are amongst the many reasons for personal bankruptcy.

39-year-old Louis Saha now lives in Mougins, France, and has 14 Premier League seasons under his belt (including four at Manchester United between 2004 and 2008). Between 2003 and 2012, he was ranked amongst L’Équipe’s top 50 highest earning French athletes. He has encountered the experience of disastrous financial investments, so he understands the difficulties players face when they are too young, poorly surrounded or misguided.

In 2013, he created Axis Stars, a digital platform which allows professional athletes to connect, inform themselves and help each other on these matters. Drawing from his experience, the former French international (20 caps) spoke on all of this.

Whether they be retired or not, what are the main reasons for players going bankrupt?

Bad investments and not planning for the long term, because athletes in activity often struggle to realise that their way of life will eventually end. But between addictions, divorces, bad investments and greedy entourages, it is ultimately multiple elements put together which makes them fall. For example, if an athlete has a gambling addiction, squanders his money without being careful, and his wife leaves him with half of his earnings, that puts them in great difficulty.

Many former players lost their wealth in divorces. Is this still the case?

Yes, from what I’ve observed, many of women “disappear” as soon as their husbands’ careers end… And I count myself amongst those. Life is not the same for these wives, who, all of a sudden, find themselves at home with their husbands, who are pretty much depressed. Even after spending 10 or 15 years supporting their husbands, they sometimes lack recognition towards them and tell themselves, “I’m 40 years old, but now I want to live my life… So long!” Except that a divorce can cost a player half of his earnings.

What sorts of addictions are costly for the new generation?

Online gambling. No need to leave the comfort of your home and nobody else is aware of this. Astronomical sums are spent and lost in a weekend. Players bet large amounts with the idea of making money or gaining pleasure, but also in the hope of becoming richer than others. It can be simplified down to a question of ego.

What are the riskiest investments?

These sums go from 500,000 to 700,000; then from 700,000 to one million… You get milked like a cow and the manager brings you with him. When you find yourself in a difficult situation, after having won lots of money and been a talented player, it’s difficult to cry out help. Out of pride, the player doesn’t want to hear “Oh look at him, he’s broke!” It’s a very taboo matter in this profession. A broke soccer player finds himself alone, a prisoner in this vicious cycle, and dies silently.

Are players not surrounded by multiple advisors to help guide them and protect them from misfortunes?

When real financial advisors, lawyers, agents or whoever it may be, do their job, yes. But an advisor doesn’t always tell the whole truth to his young player, and may force him, for example, to put 50% of his pension, for him to win it back at the end of his career. Sometimes, a player can be dumb and mean. He tells himself, “I earn so much money compared to my family, that I’ll have time to see it by the time I retire, no need to worry.”

Except that instead of warning the player that there’s a risk or a danger, the agent or advisor, who has been buttering him up since the age of 16, will say whatever to please his player, because he knows that he’ll be fired if he tells the player what he doesn’t want to hear.

Are there a lot of sketchy advisors?

Due to a lack of time and competence, a high level athlete has to trust someone else. Yet, in an unclear world, many are surrounded by managers who are capable of anything and everything, who have conflict with the law and then disappear without ever being sanctioned.

We should focus more on limiting who has access to elite positions. It isn’t done correctly by FIFA or player unions. How is one meant to know who is good or bad, if the official listing has serious agents and people who don’t even have degrees? Today, many high level athletes are bankrupt two to three years after their career ends… It’s not normal. That’s why I created Axis Stars.

Is the family not a form of protection?

Parents are sometimes out of their depth. When the agents spend all their time around their kid and offer them a 100,000 euro car, they’re thrown off. They tell themselves, “Tomorrow, I’ll resell it and it’ll last me a couple of years.” Some don’t want to prevent their son from becoming the goose that lays the golden egg. Imagine if an African player becomes an icon in Europe and suddenly earns 1,000 times more what their parents do…

That’s quite the shock for them. It’s difficult to manage an 18 to 25 year old without the right outlook, and without an entourage that can tell the son that a decision is bad, that they don’t agree with it and that he needs to change his attitude. Plus there’s the entourage of fake friends that follow them everywhere…

How did things happen when you began?

As soon as I signed my first professional contract at 18 years old (10,000 francs per month with Metz, his parent club), I first paid off the debt of my parents (his father is a machine operator and his mother is a nursing assistant). Luckily, I had a strict and intelligent upbringing, but when you suddenly become famous, subconsciously, you have a certain amount of power on your entourage. Then when your family starts to ask you for money, it becomes quite scary. Luckily, in spite of that, I listened to the good advice my parents gave me.

With that being said, you’ve also had the experience of making unfortunate investments. What happened with you?

Six years ago, I invested a six-digit sum in a tax exemption production advised to me through my bank. My agent didn’t fully understand all of this, and in the midst of my transfer, I couldn’t look over the documents written in English. My business failed after three years, and I lost all the money invested. It’s frustrating when I think about it. When I was younger, I made bad decisions due to my age. I bought houses, cars… The mentality you have when you’re 20, is not the same as when you’re 30.

Did you lose your sense of reality?

When I played in Manchester, i wanted to buy a neighbourhood in a safe part of the city. When I saw the prices, I asked myself what was going on. I started to get scared. But I did it (he bought three houses in seven years, as well as a house in London), because as a player, you can’t be in a neighbourhood where all the people recognise you, when you try to take your kids for a walk. I didn’t even notice that I’d become part of the cycle… Till the day that I saw my water and electricity bill was 30,000 euros!

How was that possible? I couldn’t understand. Yet, with my partner at the time, we were pretty careful with our money. So I called the administration. Except that when you say who you are, the person on the end of the line tells themselves that you make a good living, and that it’s okay… Almost as if, you can’t even be economical. Seeing that bill was a difficult moment to cope with, because I realised that I had probably done worse before.

But why buy such big houses?

In that kind of neighbourhood, all the houses are big! It’s obvious that when you’re single, living with your brother and an agent, it’s stupid to take a house with eight bedrooms. But players do it anyways…

To the point where you wouldn’t even set foot in certain rooms?

It happened. If you have a big house, it’s because you’re a good player. I don’t abide by that, but it is linked to the competitive mindset to think like that. That’s the model of American football and the NBA on certain players, especially African ones. It’s a flashy kind of trend which tends to mess with your head.

To finish, what prevented you from going bankrupt?

The education of my parents, and the click I had when writing my book (Thinking Inside the Box, released in 2012). At that time, seeing as I didn’t know how other players were getting on, I spoke to William Gallas, Thierry Henry, Zidane… And we all said to each other “It happened to you as well?!” I understood that the sporting community didn’t exist, that players didn’t have common references, and weren’t really guided.

Yet, they are surrounded by people with bad intentions who only look to get into the stars’ circle because of the money there is. And seeing as players can be arrogant, poorly educated and sometimes absent, there is a niche to exploit…