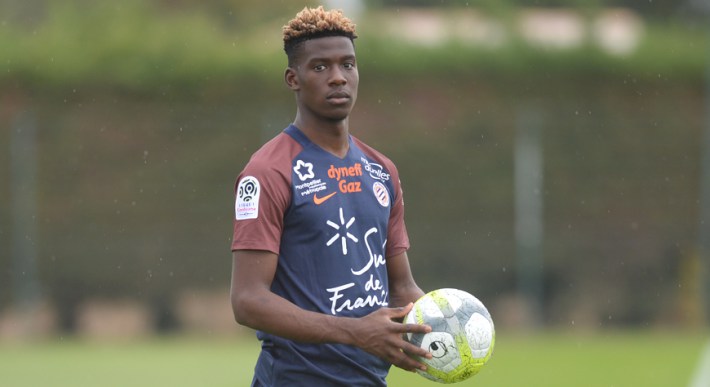 Montpellier are having a tremendous season and that is mainly thanks to their incredible defence. La Paillade’s back-line has allowed just 22 goals at the time of writing, the second-best tally in the league and only three more than Ligue 1 titans Paris Saint-Germain.

One factor in that water-tight blockade is 20-year-old Nordi Mukiele, who has experienced a meteoric rise from the second-tier of French football to being linked with big European clubs in the space of just over 12 months.

The youngster grew up in the Montreuil suburb of Paris to DR Congolese parents, where he was spotted by Paris FC. He remained there until 2014, when he was picked up by Stade Lavallois, playing sporadically in Ligue 2 for three seasons with the club.

In January 2017, he joined Montpellier at a turbulent time for the club. He played almost every week, but the team continued to spiral towards the drop-zone, under a myriad of managerial set-ups and in the end, they were only saved by the depravity of the competition below them rather than through their own endeavour.

At the start of the current campaign, former Nantes manager Michel Der Zakarian was ushered into the dugout and many predicted that it would be another season of woe from MHSC. However, the Armenian has lent on his defensive sensibilities and created a team that is now challenging for a Europa league spot instead of fighting off relegation.

Mukiele has been a big part in that but more to point, the manager’s decision to move him inside has been the masterstroke that has gelled the team together.

In the summer, the club signed Ruben Aguilar to provide him more competition at right-back. At the start of the 2017-18 season, the young Frenchman lost his place to the former Auxerre player but seeing his potential, Der Zakarian wanted to find a way to fit them both in the starting eleven.

A switch to a back three, placing Mukiele at the side of experienced campaigner Vitorino Hilton, and they have not looked back since. Aguilar has been the perfect compliment to opposing wing back Jérôme Roussillon and Mukiele has become one of the most intriguing centre-back prospects in Europe.

The best thing about the move so far is that Mukiele has not forgot what he has already learnt. His first career assist has come since a shift inside, attacking and crossing from deep much like a full-back is taught to do, yet it’s allowed him to add so much more.

What will initially catch the eye is his proactive attitude to defending. He is always on the front foot, looking to engage the attacker on the ball and take opportunities where they either have a heavy touch or when he can steal in-front of them.

Mukiele is a nuisance. emphasised at the time of writing by the 2.3 interceptions per game he is making, third only to Edgar Ié and Papy Djilobodji in Ligue 1, and his 2.2 tackles per game, he is constantly combating the opposition.

When he is in possession, he is endlessly positive and forward-thinking. That is achieved through playing passes between the lines or breaking into space in-front of him, Mukiele is a defender that transforms defence into attack and that’s been vital in stopping Montpellier becoming a one-note defensive team that grinds out draw into taking wins.

Many also notice his physical frame, which he’s still growing into. He’s already imposing himself, especially in the air but also has the natural pace to recover when players attempt to burst past him.

His qualities were personified in a man of the match performance in a 2-0 victory over Bordeaux. He was confident, strong and desperate to be a part of everything good that Montpellier did.

Added to that were two quite stunning defensive moments, the first being the ability to cover a good 10-15 yards between him and the attacker with the ball in the air and pull off a bicycle kick to stop a real chance at goal. The second was catching up with François Kamano with ease, who’s a pacy wide man himself, and simply bullying him off the ball before recycling possession.

He even almost produced an assist with a solid header in Les Girondins’ box. A real eye-opening performance, one where that properly made pundits sit up and wonder what he might become in a few years’ time.

There remain kinks to iron out of his game first, especially for those looking to him as a future centre back. At the moment, playing in a back three affords him to be more daring as next to some like Hilton, he has an extra man covering his back.

Obviously, that does not affect him when playing at full-back, but if you want Mukiele inside and as part of a two-man defence, that would be a major risk at this moment in time. If he mistimes a challenge, which happens and especially against strong opposition, he will put your goal in jeopardy.

Some others may already see it, but he could also be an ideal defensive midfielder. has got an exceptional passing range on him, his anticipation is first class, the athleticism and instincts are there in a position that would still provide the cover he needs to excel.

Luckily, he already knows where he needs to improve.

He told beIN Sports’ Ligue 1 Show: “One thing that annoys me is the lapses in concentration, I know it’s because I’m young and I’ll grow out of this. We’ll see what happens, but I’m working on it.”

If he keeps to that promise, he should immediately gain more than the two caps he has for the French under-21s to start with. Mukiele has been behind Toulouse’s Kevin Amian in that role but now as a centre-back, it might be his route to more international football.

That being said, he has a lot of excellent young competition for that role. You can point to Joris Gnagnon of Rennes or Issa Diop of Toulouse, but neither of them play within a side almost entirely built to support their development like Mukiele has.

There is certainly a lot to love already for Mukiele and the fact he looks to be improving every time that he is out on the pitch can only be good thing. At his current trajectory, it will not be too long before bigger clubs with grander aspirations try to tear him away from the Stade de la Mosson.

AS Monaco have contacted Marouane Fellaini

“When he would see me cry after having hit me, he’d apologise, then force me to make love to him… I think it turned him on.”