Exclusive | Bordeaux’s new left-back Loris Benito: “The quality of life is very high, the food is great, everything just comes together.” 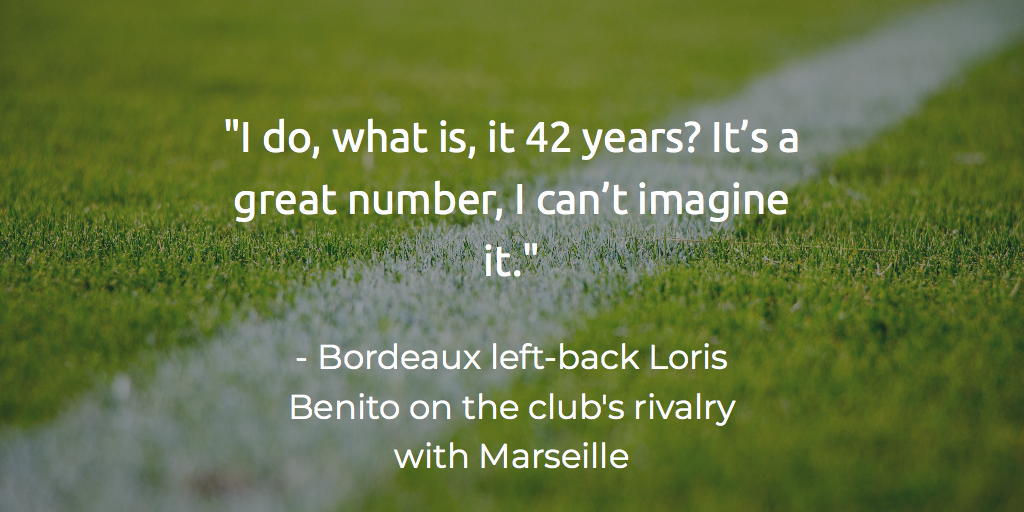 Speaking exclusively to Get French Football News ahead of the EA Ligue 1 games in Washington, DC, Swiss left-back Loris Benito discusses his signing and pre-season with Bordeaux, his impressions of manager Paulo Sousa, and looks forward to discovering the French league.

You are about to play in a mini-Ligue 1 tournament. Does this add excitement, competitiveness to pre-season?

Of course, it is very exciting. Not only is it great for us to play against very good opponents, on the other hand it’s also an opportunity to promote the French league, to promote the team. I think it’s always great to have these opportunities in life.

Are you familiar with Bordeaux’s historic rivalry with Marseille? Will it add an edge to this friendly on Thursday?

I think so! I heard about the rivalry, it was one of the first things they told me about when I arrived, I think these games are always special, whether they are played in the States or anywhere else. So that will really add a little bit of a twist.

Do you know about the home record against Marseille?

Reportedly both teams took the plane together to Washington. Was there a good atmosphere?

What role did Paulo Sousa play in convincing you to sign for Bordeaux?

He played a very big role. I rate him very highly as a coach. I think his staff, so far, are one of the best I’ve worked with, very professional, very demanding, which is very good. I think they could really make each of us players progress, and just the way he saw the project, just the way he sees the team, it’s what impressed me and one of the main reasons why I came.

He managed in Switzerland as well, while you were abroad. Had you heard of him before Bordeaux approached you?

I did. I knew that he was coaching Basel. I played with a lot of players that he had at that time and I’ve spoken to them before, and they’ve only told me great things about him. I think it’s also a good sign that he had, after one year in Basel, such a great opportunity to go to Fiorentina.

And to have a coach with such strong ideals of how football should be played: is that something that every football player would want to have in his career? Have you had anyone like him before?

Yeah, I’ve worked with some great coaches who had clear ideas. Last year in Bern I had a great coach, Gerardo Seoane, and also in Benfica with Jorge Jesus, he had a clear vision. I think it’s also something that makes a coach great. If you have a clear idea and know something that bring that across. That’s one of the great strengths of Paulo.

During the end of the last season he experimented with different formations, what formations have you been working on?

It’s clear that the coach tries different things to see which one suits the team best. He has the idea of how he wants to play. In the end, I’m just going to play where he wants me to, whether that’s in a 3-man defence or a 4-man defence. We will see. For now, it’s just a question of trying out and seeing what’s best.

In a 3-man defence, would you be a centre-back or the wing-back?

Given your language skills, what opportunities might you have had to sign for a new club? There were rumours about Newcastle, and maybe other countries?

You know, on the one hand there’s the rumour that the media creates, which has nothing to do with what the reality was. On the other hand, there was a lot of possibilities in a lot of countries, which I’ve looked at and compared the benefits. In the end I think I’ve made the right decision to come to Bordeaux.

I think it’s the right next step. I think in every country there could have been something, if I really wanted it or really pursued it more, but in the end, Bordeaux was too convincing to really go another way.

Had you considered Ligue 1? Or did Bordeaux convince you completely?

To be completely honest, I think it was Bordeaux who did a great job in convincing me. The French league is not one of the first leagues we follow in Switzerland, it’s more Germany which we follow. But we know about the clubs in France as well and I knew Bordeaux. Getting to know them in this process, talking to the people and the coach, really made it clearer and made a huge impact on my view of it. In the end I’m very happy that I took this decision, and I can’t wait to start this challenge.

Outside of football, what reasons pushed you to choose Bordeaux?

I’ve spoken to a lot of people about Bordeaux, and obviously one of the first things they say is that the quality of life is very high, the food is great, everything just comes together. Being able to play in such an environment, playing also for the region and the people is something which is very nice and which I’m very looking forward to.

In what areas have you progressed since your last experiment abroad, at Benfica?

I think on a mental level I’ve progressed a lot, ever since I left for Benfica. Not only have I had a great time there but also a challenging time, when it comes to the mental aspect. I improved a lot football-wise because I trained at a higher level. Coming back to Bern, with the injuries I had, I’ve learned a lot about myself, and my body.

I think now in the past two and a half years everything came together and I’ve been playing every single game which obviously made me progress as a player. With our experiences in the Champions’ League I guess I’ve learned from the past and put everything together, to become the player I am now.

Can your European Cup experience help your new team-mates and if so how?

Having played Guillaume Hoarau, a former Ligue 1 striker now very prolific in the Swiss league, can you give us some insight on how he scores so many goals?

I knew him only when I came to Young Boys, so I’ve known him for like three seasons. What I can say is he’s a great footballer, he knows what he can do and what he can’t, so he’s really good at sticking to what he can do and that’s what makes him such a great guy on the pitch to have on the team. He’s also, from a personality point of view, a great teammate, great in the dressing room, and helps the team to focus on what we have to do.

Did you talk to him at all about moving to Ligue 1?

How confident and/or ambitious are you and your teammates for the upcoming season?

I’m very confident. I’m a bit new to the long pre-season thing, in Switzerland we had a much shorter pre-season. So, you never know how the team is going to look in the end. As of right now, how I see the team, and how I see how everyone’s working and how much work everyone’s putting in, I’m very confident. It’s a very talented team, quite a hard-working team. I think they’ve added the right players to have a great mix to bring success to this team.

Have you a clear idea of what you can achieve?

Do you know what is the most viewed YouTube video of you?

I guess it’s when I caught the ferret?

Can we expect the same agility and quickness from you against Ligue 1 forwards?

Well the ferret was very tired, after 10 minutes running around… It’s not comparable. I’ll need more effort than I did for catching that thing.