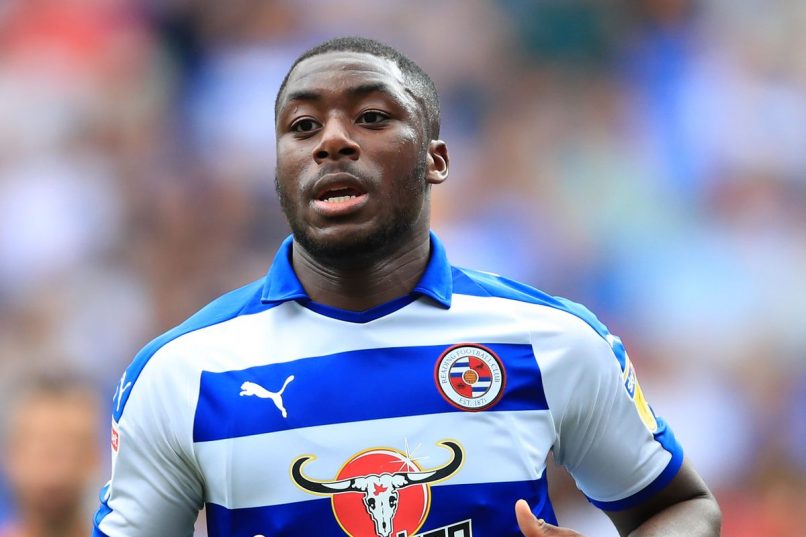 Reading’s Ivorian attacker & previous PSG youth prospect Yakou Méïté sat down with Get French Football News to chat about this season in the Championship, why he made the bold decision to leave the French capital, his future situation and much more.

You’ve been Reading’s top scorer this season, scoring 13 goals before your injury came. How has this sudden upturn in form come about?

First of all, I’d say it’s down to having a full pre-season to prepare and not having any injuries in that time; and the fact that I was coming back to the club in good form, which I carried over to this season. My loan at Sochaux definitely helped me. Before going there I hadn’t had too much playing time in professional football, so it’s an experience which allowed me to gain in confidence.

Has the affection that Reading fans show towards you surprised you?

I’d already been told about the atmosphere in English stadiums, but once I’d started playing and heard the fans chanting my name, it really made me want to give it everything on the pitch.

How did the arrival of José Gomes mid-season change things for you?

He’s a coach who’s come in with his own ideas, and we’ve tried to apply them to the letter on the pitch and now we’ve managed to stay up. Now the objective next season is to improve. We’re all going to go away and make the most of our holidays and come back with that same mentality. We want to have a better campaign than this past one, which on the whole hasn’t been very good even if we finished strongly.

Where does your nickname, ‘La Brute’, come from?

It comes from my time at PSG. I’ve been asked this before, and I can’t remember exactly when I got it or who gave it to me, but it’s stayed, and I like it a lot. I think everyone recognises that my game is based on physicality and speed, so it’s not a name that defines me 100%, but still a bit!

You’re not the first striker from the French leagues to find success in the Championship. Why do you think forwards from Ligue 1 are often sought after by English clubs?

I think there’s a lot of players in France who have similar qualities as I do, a big frame, good speed. It’s well known that English leagues are very physical, so we have to know how to up the tempo and be able to ready ourselves both physically and mentally. I think that’s the reason why a lot of scouts from English clubs now come to France. There’s a style of play here that allows us to adapt easily.

What was it like when you first arrived at Reading?

My first year at Reading was my first professional contract. I didn’t play often, although in the first half of the season I came on several times, even if the back end was a bit more complicated. It was a good experience, and a season where I learnt what things are like in the Championship. It was quite hard and playing all of these matches in quick succession can be complicated. It allowed me to be prepared for this season.

Things were difficult to start with, for example with the language, even if it is English which can be learnt more easily. The fact that I was alone was a bit hard, but I’m not a reserved type, I like to be open and have a laugh in the dressing room. So I think you can adapt quickly if you interact with people around you. That plays out on the pitch too, because if you get on well with your team mates it will show during the games.

Does the English attitude towards football surprise you?

When I went from Reading to Sochaux, I immediately noticed a difference between what you get from fans in Championship stadiums and what you see in Ligue 2. In this regard, it’s not even close. In terms of playing, it’s more intense since we’ve playing every three days, which means you never really have time to properly train, it’s all about recovery. But once you start playing at that intensity on a regular basis, you can get into that rhythm.

What pushed you to leave PSG?

They’d offered me a professional contract which wasn’t necessarily very good, and I hadn’t been given any assurances, so I decided it would be best to try my luck elsewhere.

What do you make of the fact that there are so many PSG academy graduates succeeding elsewhere?

It doesn’t surprise me, there’s a lot of quality at PSG so not everyone can play in the first team. The majority of players in the youth system have the ability to play elsewhere, which is why they move on, and for most of them I’d say it’s paid off. Whether they’re playing in Ligue 1 or 2, the important thing is that they’re getting playing team, and that they’re at clubs where they’re a part of the team.

My footballing education at PSG was very good, we worked on every aspect of the game, be it the mental side of things or physical qualities. In the academy there was always an emphasis on winning, and when we faced a team, they were always even more determined to beat us because, even though we were the youth team we were still representing the PSG. We were really the team to beat, there was that prestige.

I think the defeat against Manchester United really took a toll on them in terms of confidence. It’s always complicated when you’ve got this objective in your head and you can’t reach it. We’ve seen this effect in their recent matches.

I think they have a lot of quality in the youth ranks, so why not take a chance on a few of them? They can’t give everyone their chance because of their goals, but they can mix youth with experience. Players who have been born and raised in Paris will give it their all for the shirt.

In January you had the possibility of joining Amiens, how did that situation pan out?

Amiens were interested, and I saw it as a good opportunity to go back to France, but in the end Reading wanted me stay so the deal didn’t work out.

Do you see yourself going back to Ligue 1 at one point?

I’m happy where I am in England, but I’m always open to listen to offers. Right now there’s nothing, though.

According to certain sources Lille would be interested in you, what would you make of this?

I have some good friends at Lille that I know well, and it’s a big club that’s having a great season this year. When a club like that is interested in you, it’s always worth thinking about, but right now I’m under contract with Reading. I’m going to try and make the best decision possible for my career, so we’ll wait until the end of the season. We’ll see, the summer is long.

Reading is the club that gave me my chance and I try to repay that as much as I can, so I would be happy to stay on here another year.

You recently made your first start for Ivory Coast, how big of a moment was that for you?

It was a proud moment for me and for my family, who were born in Ivory Coast. It was a big moment. I already knew some of the players there, but it still made things completely different on the pitch. That said, I’m now in the world of professional football so I’m not as intimidated by that sort of thing anymore, even if these are players that I used to watch on TV. Once you’re out there playing with them, you’re more occupied with playing and fighting to keep your place in the team.

Are you hopeful about your chances of getting into the squad for the African Cup of Nations despite your injury?

My injury’s not that serious, it’s only a contraction. It wouldn’t be a problem if I have to be ready for the AFCON. It’s any footballer’s dream to be in this sort of competition. It will be the coach’s decision and I will respect it, but I feel like I’ve done enough. Being in the Ivory Coast national team, among all these great players, would show that my hard work had paid off.