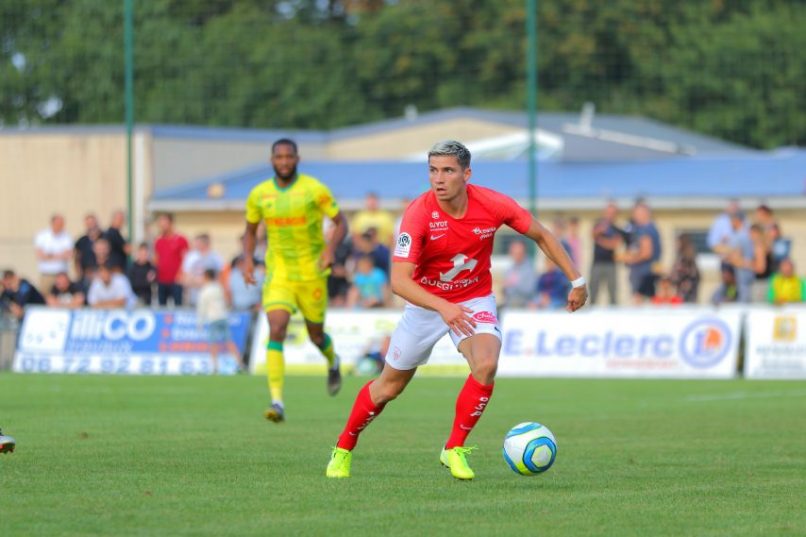 In another gloomy but effective display at the Stade Charlety, he was one of the best on the pitch. Paris FC won 1-0 against Gazélec Ajaccio that night and secured themselves a spot in the Ligue 2 playoffs. Every time he touched the ball, you could see all the supporters discreetly exchanging a few words with a knowing smile: “This kid is good, isn’t he?” That night, the kid did not score (although he hit the crossbar), he didn’t produce an assist either… but you could clearly see that he had something a bit special.

That night, Brest’s new signing Romain Perraud played one of his last games with Paris FC. He had started to make a name for himself in the 2018/19 campaign amongst Ligue 2 aficionados and the PFC fans. But if you belong to neither of those categories, you have probably never heard of him.

The versatile left-back spent the season at PFC, loaned out by OGC Nice, and really impressed on the pitch. Despite being considered as one of the best left-backs in the league, his great season did not seem to be impressive enough for Patrick Vieira and the Côte-d’Azur outfit, who decided to sell him. A blessing in disguise, as his impressive performances had attracted plenty of admirers anyway and it wasn’t long before he left the French Riviera. In truth, the player himself pushed for the move, in part because he felt neglected as not a single Les Aiglons representative checked up on him throughout the duration of his loan spell. Newly promoted Stade Brestois 29 eventually won the race, beating Celtic & Bordeaux and there are many reasons to believe that they have made one of the signings of the summer in Ligue 1.

Perraud’s transfer feels paradoxical: indeed, the northern Brittany club spent only €2m on him, which sounds like a proper bargain for a player who in 33 Ligue 2 games scored five goals and was a part of the best defence in the league (PFC only conceded 22 goals). A sum looking even more ridiculously small when you compare it to the price of another Ligue 2 talent, Lorient’s Alexis Claude-Maurice, valued at around €15m on the market this summer. Nevertheless, the fee for Brest was significant, as Perraud became their club-record signing.

Unlike Championship teams promoted to the Premier League, Ligue 2 clubs going up to Ligue 1 cannot afford to spend millions on the transfer market. Some smart moves have to be made and Ligue 2 can be a pure gold mine for scouts and talent-seekers. With an estimated budget of €30m (for fees and wages for the entire year), Brest have to spend their money wisely.

In a nutshell, Brest acquired a player who, at 22, has a mixture of high potential and a impressive professional experience. Indeed, Perraud’s full campaign with Paris FC was, after-all, the perfect “warmup” to joining a top-flight club. He now looks ready to boss his first season in Ligue 1.

The Toulouse-born defender has the characteristics of a reliable first-team player. He is consistent, hardworking, and similar in style to Strasburg’s last season breakout Kenny Lala, an archetypal modern full-back.

“I define myself as a modern full-back, I like to attack, even if my biggest source of pride is having been a part of the best defence in the league… I used to be play up top but I think it was a good idea for me to be repositioned at the back. I need space and I like to come from behind to combine with the midfielder,” he stated in a France Football interview.

Indeed, Romain Perraud rapidly became a fan-favourite at the Stade Charlety, thanks to some Roberto Carlos-esque rockets from outside the box. Keeping everything in perspective, Perraud’s style is, on some points, quite similar to the former Real Madrid full-back’s. He has a fighting mentality, an incredible shot power and a left-foot that has proven throughout the season to be a deadly weapon for set-pieces.

And when asked about this incredible shot power, he simply responded: “I’ve always had this ability to shoot from distance. It’s funny because every time I face a goalkeeper, I want to send him crashing into the back of the net as well as the ball.” A sentence that perfectly sums up Perraud’s style of play and mentality.

The Perraud-Brest association looks like a win-win situation. Indeed, the Brittany outlet seems like the perfect place for him to grow and discover top flight football, as he will only start his second campaign as a professional. According to Perraud, one of the factors that made him choose Brest over other clubs was the discourse offered by the club’s new coach Olivier Dall’Oglio.

The latter individual presented a project that made perfect sense to Perraud, as the former Dijon gaffer is known for his very classy and attacking football vision. The 4-2-3-1 formation, rumoured to be the one that he will use in Ligue 1, could well be perfectly suited for the ex-U20 international.

Romain Perraud could definitely be one of the biggest surprises in Ligue 1 this season, helped by a team really well suited for more than a simple battle against relegation.