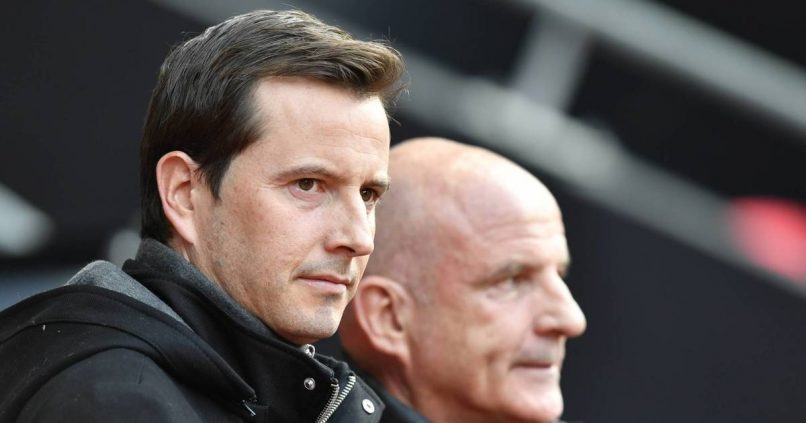 Rennes are a club renowned for producing quality young players however the most recent promising prospect to emerge has been 38 year old coach Julien Stéphan. Following his appointment to the top job back in early December 2018, Stéphan has enjoyed unprecedented success as head coach at Roazhon Park.

Stéphan is a Breton at heart having been born in Rennes and the son of the now French World Cup winning assistant coach Guy Stéphan. His playing career was nothing to particularly shout about as he drifted around the lower leagues. It was clear though, even at a young age, that Stéphan had a desire to coach. Stéphan senior even saw it, noting that “he was obviously surrounded by football. Compared to his younger brother Guillaume, who loves football too, Julien is in love with the pitch. It’s different. He had the desire to teach and to train.” Throughout his childhood and into adulthood, Stéphan watched a lot of games, noting down the systems used by various coaches and constantly searching for new and different tactics.

After coaching the youth teams at Chateauroux and Lorient, Stéphan was drafted into his hometown club in 2012 to coach the under 19 side before moving on to the reserve team in 2015. His time in charge at that level included bringing through talents such as Ousmane Dembélé, Joris Gnagnon and Jérémy Gélin. His success at coaching young players had not gone unnoticed and in October 2018 following Thierry Henry’s unveiling as Monaco coach, it was Stéphan who was top choice to join as a key member of Henry’s backroom staff. Rennes held firm on refusing to sanction the move and it proved relatively convenient as come early December and off the back of a 4-1 thumping at home to Strasbourg, Sabri Lamouchi was sacked. Whilst numerous names were linked with the role, it was Stéphan who was promoted from within and appointed on a caretaker basis.

The impact was instantaneous as Stéphan oversaw consecutive wins over Lyon and Dijon, becoming the first Rennes coach to win both of their first two games in charge since 1932. President Olivier Létang did not need any more convincing and Stéphan was swiftly appointed on a permanent basis.

Rennes’ excellent run continued as qualification to the knockout stages of the Europa League was secured along with wins over Nantes in the Coupe de la Ligue and Nîmes in the league. Key to that run was the defensive organisation Stéphan instilled in the side. In Stéphan’s opening five games, his team only conceded one goal. At the other end of the pitch there was improvement too with the likes of Benjamin Bourigeaud and Ismaila Sarr, both of whom had struggled to hit their best earlier in the season, able to rediscover their form.

Then there is Hatem Ben Arfa. The enigmatic Frenchman was strongly rumoured not to be a fan of Lamouchi’s and those theories only grew stronger as he was another to noticeably hit form under Stéphan. The key, according to Stéphan, was to allow Ben Arfa the ability to roam in a freer role. Removing restrictions from Ben Arfa has always been key to getting the best out of him, but Stéphan has also warned that he does not intend to completely let him have the run of things. A sensible balance, it would seem.

Despite a surprise loss at Guingamp in mid-January, Stéphan has managed to keep Rennes in good form. Whilst perhaps not at their best, he has Rennes grinding out results despite that, arguably another positive sign. Even in their 4-1 defeat at the Parc des Princes against PSG, the opening 45 minutes saw Rennes take the game to Les Parisiens in a manner few teams have been able to do against the Champions this season. In the nine games Stéphan has been in charge for in the league, Rennes have taken 19 points, second only to Lille. In comparison to the preceding nine games under Lamouchi, Rennes took only 10 points and conceded nine more goals.

Man-management seems a key part to Stéphan’s style as a coach. Gnagnon, now at Sevilla, spoke glowingly of the impact Stéphan had on him during his time in the youth setup at Rennes.

Speaking to Ouest-France, Gnagnon praised Stéphan: “He is the father I did not have. He educated me as a man and as a footballer. For my part, our relationship goes beyond the borders of football. When I had concerns, I went to see him, even when I was in the senior team. I spoke with him about a lot of things, sometimes it was just to get information on an attacker that I was going to face that weekend”.

Gnagnon continued, “when I arrived, I struggled with authority. When Julien spoke to me, it was different. I managed to channel myself. He has a certain ease when he speaks, he is a direct person. He is calm and has a special touch, with an accuracy in everything he does.” Gnagnon is under no doubt about the impact Stéphan has had on his career, “I am where I am now because of people like Julien. It’s always better to meet someone like Julien both in football and also for your personal life.”

With the qualities Stéphan possesses as both a coach and a man, you feel that if he can continue this excellent run of form going with Rennes, bigger clubs than Monaco will soon be taking an interest and it certainly won’t be for a role in the backroom.