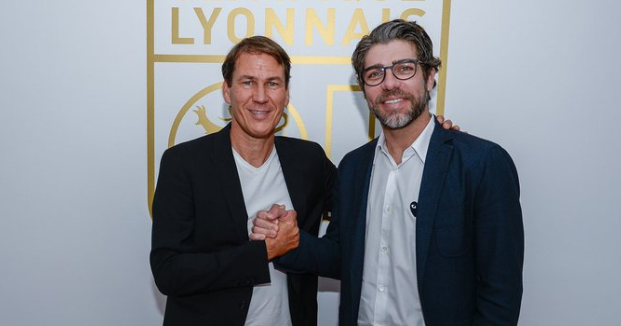 Mourinho, Wenger, Blanc… these were just some of the names linked with the Lyon job following Sylvinho’s dismissal. However fanciful they may have been, they caught the imagination of Les Gones’ supporters, and rekindled some of the excitement that had preceded the season, and the club’s fabled new era. Fans grew concerned when Jocelyn Gourvennec, recently relegated with Guingamp, was touted as the frontrunner. Apprehension turned to anger and disbelief when the news finally broke on Monday.

Rudi Garcia, having left Marseille in May with his reputation blemished following a bitterly disappointing campaign, had joined with a contract running until the end of the 2020-2021 season. The backlash from Lyon fans that followed has been deafening.

On the surface, the appointment makes sense. There can be little doubt that Garcia is a talented coach; he transformed Lille into a league and cup double-winning side in 2011, removing the shackles from former manager Claude Puel’s more defensive approach to the game to implement an exciting brand of attacking football. Admittedly, a far cry from the lethargic, reactive tactics imposed by Sylvinho. Whilst at Lille, he helped develop talented youngsters, notably Eden Hazard and the then-revered Gervinho, something Lyon should be looking to benefit from.

Garcia’s AS Roma were unlucky not to finish as champions in 2013-14, winning a then record 10 consecutive matches at the start of the season and finishing with 85 points. And who can forget Marseille’s mesmerising run to the 2018 Europa League final?

Following Sporting Director Juninho’s failed gamble on friend Sylvinho, it also seems sensible for the club to opt for a French-speaking coach with substantial experience working in Ligue 1. This is a move to steady the ship.

Moreover, unlike Laurent Blanc, who many expected to get the job, Garcia was willing to work with OL’s existing backroom staff, to whom president Jean-Michel Aulas has shown extraordinary loyalty over the years. If reports are to be believed, Blanc sought wholesale changes. Garcia on the other hand has only brought in two long-serving colleagues, assistant Claude Fichaux and opposition analyst Christophe Prudhon.

Whilst admirable, Les Gones’ loyalty has led to the club making a choice that sees a large number of supporters already alienated from the club’s new project, just months after it began: their sentiment is understandable.

Despite the logic behind this appointment, it is difficult to view the decision as one that will bring consistent, long-term success to OL, and as one that will have a positive outcome, given Garcia’s recent career trajectory, and even his personality as a coach.

Garcia is, for the most part, stubborn. Typically wedded to a 4-3-3 for most of his career, opting also for a 4-2-3-1 during his time with Marseille, he rarely adapts his tactics to suit the opposition, with his sides often lacking in versatility. This proved costly against superior opposition, with his side suffering heavy defeats in the Champions’ League (6-1 to Barcelona, 7-1 to Bayern Munich at home). In Marseille’s torrid 2018-19 campaign, it wasn’t until February that Garcia started experimenting with a 4-4-2, which saw the team undergo a mini-revival. By then, this was too late.

Also concerning is his lack of a ‘plan B’, a criticism that, ironically enough, was levelled at former OL coach Bruno Génésio. At Roma, it was widely regarded that tactically, his side were ‘found out’, which was a big reason for their decline in form during the latter stages of his tenure. Garcia’s loyalty to certain players, and disregard for the form of others leads to some questionable squad management at times. His persistence with Kevin Strootman at Marseille, with whom he had built a strong relationship at Roma and who struggled to adapt to Ligue 1, was detrimental to the team at points last season.

Garcia’s penchant for attacking football has also been found wanting at various points in his career, most notably while at Marseille, where he frequently chose to set his side up extremely conservatively; his first Classique was a drab 0-0 with PSG where the club failed to register a single shot. Added to that is the fact that his record against direct competitors in Ligue 1 while at Marseille is abysmal; his OM side failed to register a single win against teams that finished in the top three, and would frequently lose in quite dizzying fashion (5-1 to PSG in February 2017, 6-1 to Monaco in August 2017, and 4-2 to Lyon in September 2018).

Off-the-pitch antics have further marred the Frenchman’s stature in the eyes of many. In recent years especially, he has become better known for his excuses than his management, habitually blaming match officials for his team’s shortcomings. After a comfortable 2-0 defeat to Bordeaux last April that saw their faint European football hopes dashed, it was the “mistakes” of the officials that were to blame. So too against Eintracht Frankfurt (where his side should have had “two penalties”). And PSG. And Reims… the list goes on. Repetitive and exhausting to witness, expect more of the same when results don’t go Les Gones’ way.

This continuous criticism of officials even led Garcia to insinuate that his new employers were favoured by referees during the 2017-18 race for Champions’ League football; a comment which led to very public rebuttal from Aulas himself on Twitter, who labelled the remarks “unbearable and unacceptable”, while the official OL account accused the Marseille coach of trying to influence officials himself. What’s more, Aulas has publicly distanced Garcia from the Lyon job in the past, and he joins the club off the back of managing a fierce rival.

These are hardly the best foundations for a strong working relationship.

It is not difficult, then, to understand why there is uproar amongst Lyon fans, and why many are unsure as to whether this will prove a positive decision in the long term. Fans have even created a petition calling for his immediate removal, which, as of Wednesday afternoon, has over 6,600 signatures, and calls the decision “a (very) bad joke”.

What went wrong at Marseille wasn’t entirely Rudi Garcia’s fault, and so far he has been saying the right things. During his first press conference on Tuesday, he said he wanted the team to play a “possession-based game”, and to “impose their game” on the opposition.

With a wealth of attacking and midfield talent at his disposal, it will be interesting to see if he is able to follow through with this. He will certainly need to buck up his ideas in order to have any long-term success with Les Gones. He must break his cycle of starting strongly, recruiting poorly, communicating badly, tactical sterility and crisis which has punctuated his recent career. He has it all to prove.

There can be little doubt that the Frenchman will view this as an incredible opportunity to rebuild his reputation, but he must learn from his mistakes. His recent career trajectory suggests that he is not the right man for the job, and fans, already disillusioned with the club’s initial promises of a new era, will be on his back from the first whistle. Whilst a logical and sensible choice, it is one that seems to lack ambition when compared to the other names linked with the job, and this is perhaps a sign of Aulas taking back control following the Sylvinho misfire.

Symptomatic of a revolution seemingly falling short, Garcia will find himself swimming against the tide, and it is hard not to see him being washed away. In an uncertain time for the club, there is only one certainty: the match against Marseille in November will be one to remember.

Hatem Ben Arfa has court hearing as he sues PSG for €8m: “They told me: ‘You will give in.'”