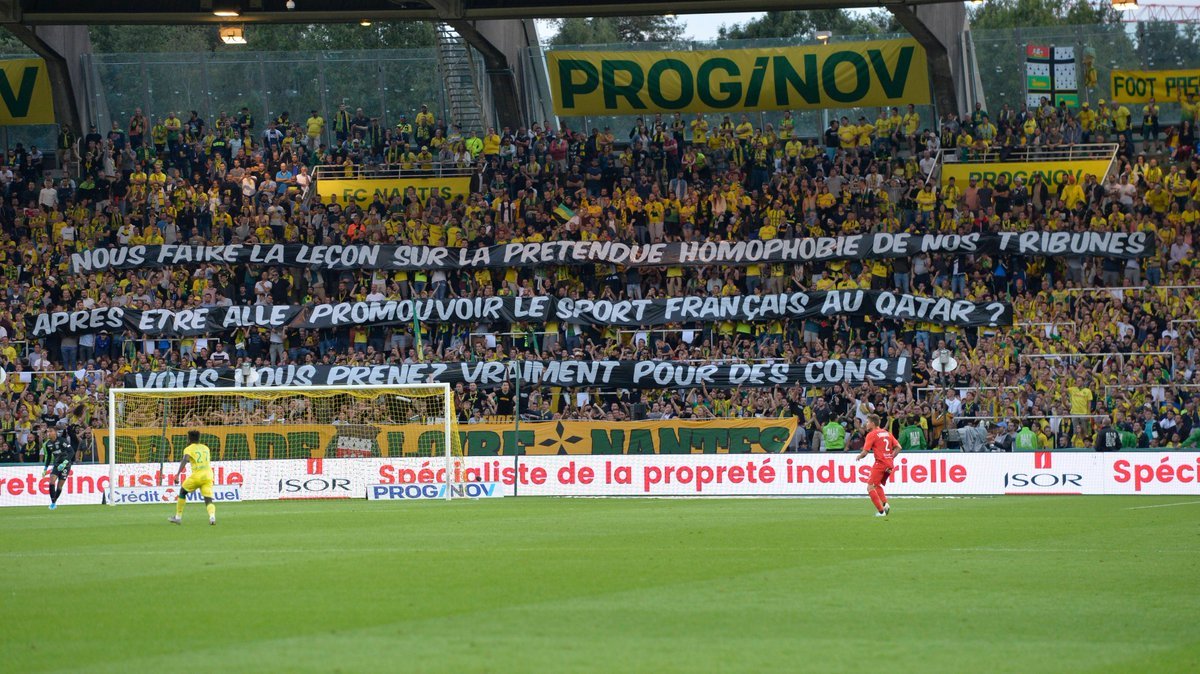 Amidst the Neymar saga and the usual southern drama at Monaco, Marseille and Nice, an important but increasingly unseemly row has been brewing over the subject of homophobia in football. An extremely pressing issue which needs to be dealt with, not only in France but across the football world, is threatening to be obscured in a haze of politics, semantics and poor attempts at humour.

The original intentions appeared entirely genuine. Ex-Olympic champion swimmer and Sports Minister Roxana Maracineanu, shocked by homophobic chants heard while attending PSG vs Marseille last season, began a campaign to encourage clubs to take more responsibility in tackling the scourge of homophobic abuse, proposing the imposition of sanctions. She was backed by her colleague, Minister for Equality Marlène Schiappa. The LFP attempted to rein the ministers in, saying that prevention was better than cure and that the focus should, instead, be on education and on dialogue with groups combatting homophobia.

As for the fans, many were unconvinced about the real reason behind any new initiatives, interpreting it as yet another abuse of football supporters. Increasingly stigmatised, banned from attending away matches, ultra groups targeted by the authorities, draconian fines applied for letting off flares. There has been a growing feeling in recent years that the powers that be are working against fans rather than with them, using the most minor of infringements to impose sanctions which fans see as curtailing their freedoms.

Any new initiatives clearly had to be dealt with carefully, with the tradition of chants from the terraces always treading a fine-line between what is and is not acceptable.

The first week of the Ligue 2 season saw the first action taken. Following the new UEFA rule stating that a match can be temporarily stopped in the case of abuse coming from the stands, referee Mehdi Mokhtari temporarily halted Nancy vs Le Mans in the face of chants from the home fans.

Here’s where the first unhelpful confusion set in. The chant which caused the stoppage was directed by Nancy fans at their biggest rivals: “Nous haïssons les Messins, ces PD, ces bons à rien.” / “We hate the Messins, those queers, those good for nothings”. Clearly homophobic in nature, it was not unreasonable, under the new regulations, for the match to be paused. However, in response, the Nancy fans began to direct their attention to the LFP, chanting “La Ligue, la Ligue, on t’encule”. This was widely and wrongly reported as the cause for the stoppage, setting in motion the events leading to today’s reign of confusion.

Without wanting to get either too graphic or too semantic, much of the debate that has raged since this original incident seems to turn on the verb enculer and the noun enculé. The former a homosexual (but not only) act; the latter the recipient of the act.

The obvious inference in use of these words does suggest homophobic intent. However, both words are in relatively common French usage as general insults – the use of the verb effectively meaning “fuck off”.

Here’s where more grey area takes effect. The very large majority of fans, in using such language (and in using the second chant at Nancy) almost certainly didn’t have any homophobic intent. However, while both ministers tweeted in support of the stoppage of the Nancy match, the misreporting and the perceived victimisation riled fan groups into action.

Thus, the early weeks of the season have seen the issue handled increasingly clumsily by fans and authorities in the very public domain of the football stadium, for better or worse.

A further stream of fan reactions – and consequent halting of matches – has followed.

At Nice vs Marseille, home fans joined in two chants, similar to those heard at Nancy, one directed at the Marseille fans and clearly homophobic; the other at the LFP and less so. Further banners were also unfurled, with a couple of attempts at wordplay: “LFP: des parcages pleins pour des stades plus gay” / “LFP: full stands for gayer stadia” and “Bienvenue au groupe Ineos: à Nice aussi on aime la pédale!” – “welcome to Ineos (who have just bought Nice and also own a cycling team): at Nice we also like pedalling/homosexuality.” While not as offensive (or unfunny) as at Angers, these banners at best straddled the line of good taste; at worst fell on the side of offence.

Last weekend saw further banners, this time focusing less on humour and more on the hypocrisy of the authorities, who are happy to fraternise with countries whose homophobia is enshrined in law. Lyon fans, at home to Bordeaux, asked “Roxana, will you talk about homophobia in Qatar in 2022?”, as well as “FIFA, Roxana, Schiappa, is homophobia only bad without petrodollars?”

Similarly, Nantes fans, welcoming Montpellier, declared “Preaching to us about supposed homophobia in the stands after going to promote French sport in Qatar? You really take us for assholes”.

For Marseille vs Saint-Etienne, meanwhile, home fans railed that “The LFP is using homophobia to sodomise our freedoms.”

Toulouse fans also sailed close to the wind with their banner “Toujours en L1 3 ans après – merci PD” – thanking their former coach Pascal Dupraz, who helped save them from relegation three years ago – and whose initials happen to also read as pédé (queer).

As for the players themselves, few have commented publicly, but Nice’s Wylan Cyprien, asked for his opinion on the spot as Nice vs Marseille was temporarily halted, said “I’m against all discrimination, but surely we’re not going to stop every match every time an idiot does something”.

Irrespective of intent, surely the main question at the heart of this debate must always be whether homosexual people take offence. One can give an opinion as to whether a chant or banner is offensive, inoffensive, funny or not, but only the victim/target is best placed truly to judge. A parallel can be drawn with the “Yid” debate in England – although there is no doubt that most Tottenham fans use it with no malice at all, the fact that many Jews take offence to use of the word, particularly as it opens up opportunities for other clubs’ fans’ abuse of the word, should be reason enough for its banning.

Sadly, the most important voices are being drowned out and, much like VAR, an initiative that almost certainly was born with the best of intentions, is being undermined and ridiculed because of poor implementation, lack of dialogue and bad faith.

The hope is that once the hype of these first weeks of the season calms down, solutions can be found and a sensible approach taken according to what truly is or is not offensive, with appropriate action taken as necessary. Until then, the fear is that amidst the grandstanding from authorities and supporters, it will be those who were meant to be given a voice who will continue to be ignored.

Bruno Genesio hits back at Lyon players’ criticism: “I read certain things that hurt me.”