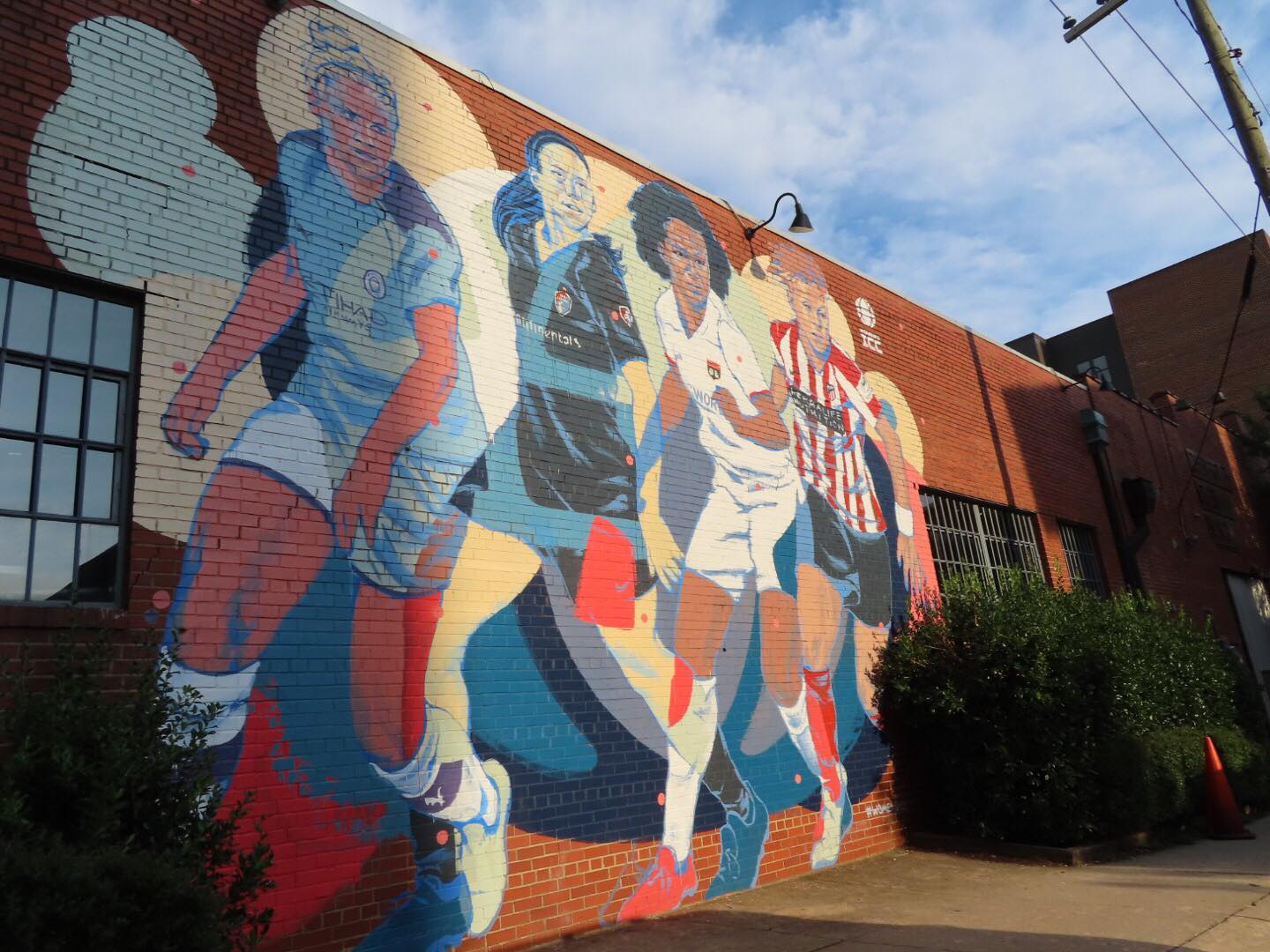 “When Lyon play, Lyon play to win.” So spoke manager Jean-Luc Vasseur, a smile in one corner of his mouth, before last Sunday’s final of the women’s International Champions Cup. It may be unusual for a professional football club to play only two matches in their pre-season. But in this post-World Cup summer, Olympique Lyonnais defined their pre-season as the obtention of a new trophy.

One week before the kick-off of their league campaign, during which their first two fixtures will pit them against promoted sides Marseille and Reims, les Fenottes traveled to an alien environment to face off against some of the world’s best. Part of the European contingent headed to the four-team ICC, Lyon came flanked by Manchester City, the holders of both English domestic cups; as well as three-times reigning Spanish champions Atletico Madrid, who replaced Paris-Saint-Germain in this year’s line-up.

But the four-time consecutive European champions had their crosshairs fixed on one club. “We came to rub shoulders with this extraordinary team that wins and is the holding North American title,” pointed Vasseur. That team was none other than the tournament hosts, the North Carolina Courage. Based in Cary, they are not only the holders of both domestic trophies but also count five past or present world champions in their ranks.

The Courage also claimed the trophy in the inaugural edition of the women’s ICC, last year in Miami. Their vanquished opponent in that final: Lyon. But as conceded by the team’s Liverpudlian manager, Paul Riley, “Last year Lyon were left thinking they were the better team, and in all fairness, they probably were.” For Heather O’Reilly, NC midfielder and world champion in 2015, “It seemed a little unfair to some supporters to say from that that we are the best, but in the US it’s the only metric we have, so we said yes we are.”

The ICC serves as a rare occasion to compare the level of football in North America and in Europe, two universes which very rarely crossover. The two schools of thought have constructed not only distinct styles of play between the two continents, but also differences in physical preparation and allocation of financial means. This encounter encourages therefore more than just comparison: it can provide a unique victory.

“I know those women are competitive,” warned O’Reilly. As if to illustrate, Ballon d’Or winner Ada Hegerberg did not hesitate when asked where her motivation comes from: “By winning”. “We have an American attitude when we say we want to win and be the best,” added Vasseur, playing to the audience, though entirely accurate.

Each side had a hurdle to hop over before everyone’s desired match-up. In their semi-final, Lyon took on Atletico Madrid in an atmosphere crushed by the heaviest of Southern humidity. The resulting slow tempo provided Courage coach Riley a chance to tease: “You wouldn’t see that in our league. You wouldn’t be allowed to do it, there would be too much pressure.” The deadlock was broken in the 91st minute, with a Wendie Renard special. “It’s not because I’m tall that I score,” emphasised the captain, “it’s because it was a well taken corner and I’m there at the right moment.”

In the NC Courage – Manchester City match, extreme weather and late drama were also at the centre of attention. With 15 minutes left, City were holding on to a 1-0 lead courtesy of Georgia Stanway, but an evening thunderstorm hit the players with an hour-plus interruption. “I’d still rather that than the heat,” laughed the 20-year-old goal-scorer. The break meant a turn in fortunes for her team, however, as the Courage doubled the pressure and turned the score around, their second goal coming in the dying seconds of added time. Two days of recovery and preparation were scheduled to follow.

Lyon’s trip to America was not just a chance to face challenging opposition. It was the discovery of another setting, another experience of football, or “soccer”. “We see they have super nice facilities, even in the universities,” observed Amel Majri, “I hope in France that can inspire us, and it’s great to play in these conditions.”

WakeMed Park, the complex built around the 10,000 seat Sahlen’s Stadium, houses the training facilities for the Courage and North Carolina FC, a second-tier men’s team. The pitches are of the highest quality, and it is surrounded by forest. It is an idyllic location for football at a professional level.

On the morning after the semi-final, OL’s substitutes had a chance to face the Tar Heels, from the University of North Carolina. A special occasion for former UNC player Lucy Bronze, though she was not involved. Had she warned her teammates about the level of college soccer in America? After quickly going two goals up, Lyon’s second-string but still international-studded line-up started to struggle to combat wth the Americans’ enthusiasm, to the point that the college team earned a draw from the 60-minute match.

A curious revelation over these first two days was the 4-1-4-1 employed by Vasseur. The front line of four was very much made up of attacking midfielders, and with the full-backs pushing up, Lyon often attacked with seven women at a time. “We have such an offensive potential that we can pull it off,” commented former OL midfielder Camille Abilly, now one of Vasseur’s assistants.

Despite the buckets of talent, there was at times a lack of efficiency in the construction of attacks. For Hegerberg: “There’s still some work left to do to find those last passes. We try to be creative with each other, and it’s exciting to continue working on that.”

Disregarding the risk of being unbalanced and despite Riley’s promise to press them hard, les Lyonnaises fielded that same system against the Courage. In fact, it was the exactly same line-up as against Atletico, meaning that many Lyon substitutes enter the season with minimal match time under the belt.

On the other side, the Americans produced an extremely narrow 4-2-2-2, a staple of their highly vertical style. Viewers of the World Cup might have recognised Abby Dalhkemper, Samantha Mewis, and Crystal Dunn from the USA’s victorious starting XI (the latter returning to her natural position of right winger, as opposed to left-back where she played in France).

In the first half, Lyon unsurprisingly held most of the ball. “We lacked a little efficiency again, we had more chances,” was Eugénie Le Sommer’s take-away, thinking back to the close-range effort from Nikita Parris, and Majri’s several shots, one of which hit the crossbar. There was no clear dominant side however, as the Courage surged forward several times and demonstrated the potential of their intensity.

In one instance, Renard found herself alone, chasing a wayward ball with a forward breathing down her neck. Her first touch, with the outside of the foot to turn 180 degrees and face play again, majestically wrong-footed the pressing striker and showed why the 29-year old ultimately won player of the tournament. “They didn’t really put us in difficulty in those situations,” she claimed.

The key to unlock the match came in the 57th minute from a sumptuous Dzsenifer Marozsán curving shot from outside of the box. The German number 10 benefitted from lackadaisical pressure to turn an innocuous pass from Bronze into the winning goal for Lyon’s first trophy of the season.

The final stages of the match also introduced goalkeeper Sarah Bouhaddi to American supporters’. On a goal kick, the fans behind her started counting the seconds out loud in unison, reaching fifteen. This resulted in a yellow card for the shot-stopper and induced some nervousness in every intervention she made after that, as the human-timer kept pressuring the referee.

At last, Lyon could lift a new trophy and deliver a rendition of Paul Pogba’s “On va tout casser, eh!” victory chant. “They celebrate every trophy like it’s the Champions’ League,” said Bronze of her teammates, “they’re very proud of every trophy.” “Only four to go!” smiled Marozsán, her eyes already set on the upcoming league match.

For the Courage, there was no shortage of positives either. “It was so cool coming out in front of 8,000 people and being able to showcase the quality of the women’s game,” Abby Dahlkemper. Her coach was also delighted despite the result: “We were better against them this year than we were last year, but Lyon was also better. That was World Cup final type quality.” The disappointment quickly evaporated and many players looked forward to next year’s edition, expected to include eight teams.

The final word belonged to Vasseur. “Tonight, we are the best,” he declared, before agreeing with Hegerberg: “But we have to always question our way of being and push ourselves for tomorrow.”