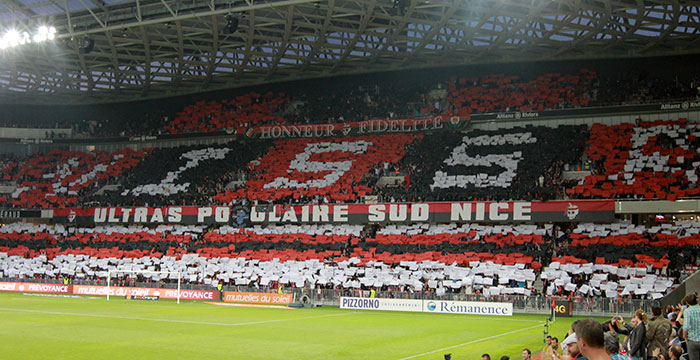 “I’ve been in the business for twenty years and I’ve never seen that […] if we were gangsters, thugs, I would understand these measures, but I’m a father, I have a job, I just want to support my club.”

These are the words of Greg Massabo, spokesperson for OGC Nice’s principal ultras group, the Populaire Sud. What he is referring to is the travel ban issued to Nice supporters ahead of their match against Nîmes on August 17th, an administrative ruling that has become far too commonplace in France over recent years. Supporters were prohibited not just from attending the match, but from leaving the Alpes-Maritimes department of southern France between 5pm and midnight. “It’s house arrest”, he told France Bleu.

Cars leaving the department were checked by authorities, and any semblance of support – be it a shirt, a flag, a bumper sticker – meant an enforced return home. Police were even searching car boots. Failure to comply with such restrictions is punishable by six months imprisonment and €30,000 in fines. “You are treated more severely than the fichés S”, Massebo remarks, referring to individuals flagged as being a serious threat to national security.

The match was just one of four that weekend subjected to such restrictions, which are by no means new. For authorities, they are essential for maintaining public order. For supporters, they are an infringement of their freedom. This ban however was perhaps the most over-the-top so far in what has been labelled as authoritarian and liberticidal treatment of football fans.

So where did this all begin? Travel bans were introduced as part of new legislation back in 2011 as a means of combatting France’s somewhat unchecked problems with football violence and hooliganism. Several high-profile incidents of fan violence had punctuated the preceding years, perhaps most notably the death of Yann Lorence on March 17th 2010 following a fight between factions of PSG fans on the sidelines of Paris-Marseille. The ability to prohibit the travelling of an entire group of supporters was just part of a larger internal security law, LOPPSI 2, which came into force in March 2011.

Two possible types of travel bans were introduced: those to be issued by the regional prefect, and those to be issued by the Minister of the Interior. Prefectural decrees prohibit away supporters’ access to defined areas in the home team’s department, be that the town centre, around the stadium, or the stadium itself. There are also less restrictive options, such as banning alcohol around the stadium, imposing a predetermined route for away supporters, and having them use club-authorised transport.

In cases deemed more serious, the Minister of the Interior can take action, but this can only be done in addition to a prefectural decree. Such a decision is less common, and more severe; supporters are banned, on a national scale, from travelling between two different departments. This is precisely what Nice fans had to contend with, forbidden from travelling to the Gard department (where Nîmes is located). Sterner still, they were placed on lockdown. These rulings apply to all fans, not just ultras. Any individual caught displaying or expressing any support for their team in any prohibited area faces severe punishment.

These laws are not the same as a stadium ban. They were not intended as a punishment, but rather to be used as a preventative measure if the risk of violence between two sets of supporters was high, and if the prefect cannot ensure the safety of those attending games, or the general public. They constituted a “serious and exceptional measure”, then government minister Marie-Luce Penchard outlined before the senate in September 2010.

Initially, such procedures were used sparingly and appropriately. According to research by French daily Libération, away supporters were only subject to travel bans for five matches during the 11-12 season. However, this figure has been steadily on the rise since, reaching 47 in 2013-14 and 2014-15, before peaking at 104 in 2015-16, due to the November 2015 Paris attacks, and a national state of emergency being declared. The state has justified most bans since then by citing a lack of human resources, namely police, to supervise travelling supporters, as was the case this past season with the gilets jaunes protests.

These controversial measures are now far from “exceptional”; they are overused, overblown, often unjustified and largely unnecessary. To France’s supporters, they feel like a punishment.

53 travel bans were authorised last season, 38 prefectural and 15 ministerial. Despite fewer protests occurring now than at certain points in the previous ten months, this number shows no signs of slowing down.

The ANS, France’s national supporters association, has frequently denounced the bans, and released a condemnatory statement at the end of last season. Accusing them of “depriving [supporters] of their liberty”, the group cited 101 matches as having been the object of prohibitions, total or partial (limited number of supporters, mode of transport or set meeting points) across France, and 601 since 2010. “This disproportionate number and the recurrence of these measures over a decade shows only one thing; the fans are not [treated as] full citizens.”

Regarding the ban issued to Nice supporters, spokesperson of the organisation James Rophe told La Croix “This is a real infringement on freedom of movement, hypocritical and perfectly absurd in terms of security; specifically, does it prevent someone not presenting himself as a supporter from having bad intentions?” Nice coach Patrick Vieira suggested in his press conference that the state opts for the easy way out, “It’s a lot easier to give a ban than to have plans to control those few supporters. It is true that it is the easy way.”

Pierre Barthélémy, a lawyer who has challenged some 50 travel prohibitions over the years, tells Libération, “We put forward the fact that the antecedents invoked between the two teams are phony, old, irrelevant, that no dialogue was initiated before the decision was taken or that, contrary to what the prefecture indicates, there are enough forces available.” Prefectural decrees can be appealed, but are very rarely overturned. Ministerial decrees cannot.

What Barthélémy alludes to is the often erroneous or exaggerated information authorities use to justify these decisions. The ban issued to Nice fans cites incidents involving Nîmes supporters occurring in 2015, 2017 and 2018. Yet in November 2018, Nice fans were able to attend the match at Nîmes without any problems, something defender Christophe Hérelle highlighted before the press, “it is annoying because last year they [the supporters] were there and everything went well.”

Worse still, the authorities’ reasoning for bans occasionally borders on the ridiculous. Winter sales and thus busier streets in Troyes prevent Nantes fans from travelling. In August 2017, Nancy fans were banned from travelling to Nîmes for a match because authorities needed to prepare for the Vuelta a España starting in the city… a week later. Marseille fans were prohibited from travelling to Lyon in September 2018 due to, among other reasons, fans throwing paper balls onto the pitch and play being stopped for one minute. The list goes on.

This doesn’t just affect French teams. Eintracht Frankfurt supporters were banned from Marseille for their Europa League tie in September of last year, a decision which board member Alex Hellmann called “completely unreasonable and [a] legally highly questionable – if not illegal – intrusion on individual rights.”

These procedures have also been revealed to be ineffective. They do not actually prevent troublesome individuals from travelling. Rather, they prohibit people behaving like supporters; cheering on their team, wearing their colours, or actually attending games. Partial bans may simply close the away section of the ground, and travelling supporters may be liable to mix with home fans. This increases the risk of clashes, as opposed to having a controlled section of the ground – far easier for the authorities to manage.

The safety of match-going fans and the general public should of course be prioritised. Yet the repercussions of these measures are clear to see. Atmosphere in stadiums is dampened, due to the role often played by away support, especially ultras. Away sides may struggle more, with next to no support inside the ground. Empty sections of the stadium may seem a less attractive spectacle for broadcasters and casual viewers. Derby matches lose their fervour.

Amidst the controversy, there are some positives. Minister of Sports Roxana Mărăcineanu has told Le Parisien this past week that she is ready to work with Minister of the Interior Christophe Castaner to “find solutions”, and allow away fans to travel, a promising claim should it come to fruition. In an interview on national news network BFM TV, Castaner himself insisted that he wants to reduce the frequency of the bans.

In addition, clubs are finally starting to take a stand against these decisions. Last year, Lens players wore shirts bearing the slogan “supporters ≠ criminals”. More recently, Nice released a statement condemning the bans, calling them “unfair”, and criticising authorities for “excessively [penalising] supporters in general, and particularly the people of Nice”. It seems enough is enough.

That being said, the “dialogue” that so many clamour for is virtually non-existent. Each professional club has a référent-supporters, an individual responsible for creating dialogue between individual supporters, supporters’ associations, the club and the local authorities. When dealing with these measures, however, they seem largely ignored. For Cyril Dubois, a lawyer specialising in defending football supporters, things will improve if club presidents get involved, as he told 20 Minutes, “They are more likely to meet the prefects or the prefecture services. If the clubs do it, the message will obviously be more likely to be hard.”

For his part, James Rophe laments the burden placed on local prefectures, who he believes are forced to make the decisions they do. In an interview with Ouest-France, he laments the absence of an “organisation […] to discuss serenely upstream with the authorities”. As things stand, prefectures decide “unilaterally, without consultation”.

Until such dialogue exists, the lack of understanding between supporters and the authorities will only continue to grow, and a relationship that needs to flourish will deteriorate further. More and more ultras groups are ready to brave the bans, only creating more tension. Football authorities seem to be on the side of fans, so it would appear that eventually something has to give.

For now, supporters are being unfairly stigmatised, and deprived of their fundamental freedom. With Saint-Étienne fans banned from travelling to Marseille this past weekend, the struggle is raging on. And as Patrick Vieira affirms to the press, “[…] it’s football that loses more than anything else.”

Tiémoué Bakayoko: “Coming back to Monaco is not a step back.”

Wissam Ben Yedder: “Today, people will be able to see me more.”