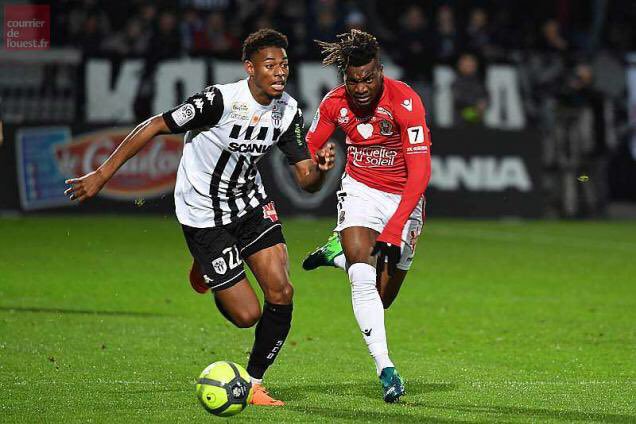 Down by a goal at home to Bordeaux, Angers defender Romain Thomas was taken down in the box and after reviewing VAR, the referee awarded a penalty. Jeff Reine-Adélaïde took control and stepped up despite striker, Stéphane Bahoken, being the designated taker. The penalty was easily saved and Adélaïde was immediately substituted. Angers ended up losing the match 2-1.

Before the recent Nantes game, coach, Stephane Moulin reflected back on the previous fixture and stated that:

“Jeff apologised to everyone, and made himself available to the team. I believe a lot in these things. We need everybody.”

It was a low point in the Frenchman’s first full year at the club. After spending the first half of 2018 on loan from Arsenal, Angers did not hesitate to try and bring Adélaïde back on a permanent transfer following new Arsenal manager Unai Emery’s decision not to take the winger on the Gunners pre-season tour.

Within the following week, a fee of around €1.6m was agreed, in a deal that served as a reflection of Angers’s typically conservative and savvy business that has boasted healthy financial figures year on year, despite having one of the smallest budgets in the competition since promotion in 2015.

The club showed no lack of confidence in Adélaïde; with him regularly becoming part of the starting line-up, mostly operating from the right side of attack.

Unfortunately, the missed penalty highlights overwhelmingly how Adélaïde’s season has played out so far; a lot of promise, lacking the finishing touch. His 19 games to date have only produced one assist and no goals.

This underwhelming productivity has its caveats. In attacking play, Angers are geared to utilising Flavien Tait on the left. As the club’s key offensive force in 2018, Tait has  naturally contributed the most goals. Typically occupying the right of the central midfield is Cheikh Ndoye, who sitting alongside Adélaïde, the Frenchman has had more exchanges of the ball with the Senegalese than most. Ndoye’s limited technical and passing ability therefore does not help and, despite the winger’s attempts to use him as a pivot to play off, this only works sporadically.

Fans and pundits alike were hoping for more production from Adélaïde; as his signing marked a clear recruitment tactic that aimed to plug the huge goal contribution of outgoing star striker, Karl Toko Ekambi.

Adélaïde possesses Ekambi’s ability to create exciting moments, but unlike the Cameroon international, these tend not to lead to goals or opportunities. When in a good position, Adélaïde tends to freeze and either continues to keep the ball; usually ending up with him being dispossessed. Alternatively, he will make an ineffective panic pass/shot, extinguishing any form of a promising attack. It is certainly not all doom and gloom though. It is clear to most spectators that he possesses the talent to exceed. Comfortable to take the ball down the flank or to cut in and accelerate centrally, his ability to leave the defender questioning his next move is excellent. It is not hard to believe then that the 21-year-old has established himself as one of the league’s best in ball progression; comfortably completing over 3 dribbles per 90 minutes.

Adélaïde’s technical ability cannot be doubted, with his superb close control and explosive exchanges that accelerate play marvellous to watch when he is confidence. His wiry, tall frame can fool you into thinking his balance is limited, but he is able to position his body well, whilst moving with the ball at speed and in confined spaces. In the past year he appears to have gained some brawn to his physique, improving his ability to hold off defenders and draw fouls if needed; something that he utilises to slow a game down when the team is counter-pressed.

His stamina, however, leaves much to be desired, resulting in his involvement and activity deteriorating too early. Angers’ players cover more distance on average than any other team in the league so this is a clear factor to take into account. Despite this, the coach’s assured faith in Adélaïde is a testament to the player’s gradual improvement in this area.

The former Lens academy graduate is perhaps one of the most frustrating players to watch in France at the moment, but the club and fans alike have faith in him to eventually deliver the goods. The most recent Angers player with a profile similar to Adélaïde’s at the club was young Ivorian winger Nicolas Pépé.

A season and a half since leaving the club, he is now one of the most electrifying young attackers in Europe. Adélaïde has the talent to replicate this feat, with his development already over the course of the season convincing French U21 coach Sylvain Ripoll to call up the Angers winger. There is clearly much more to come for the ex-Gunner; and, with this bright future ahead of him, he will no doubt not be needing to step up and take penalties in order to prove his worth.