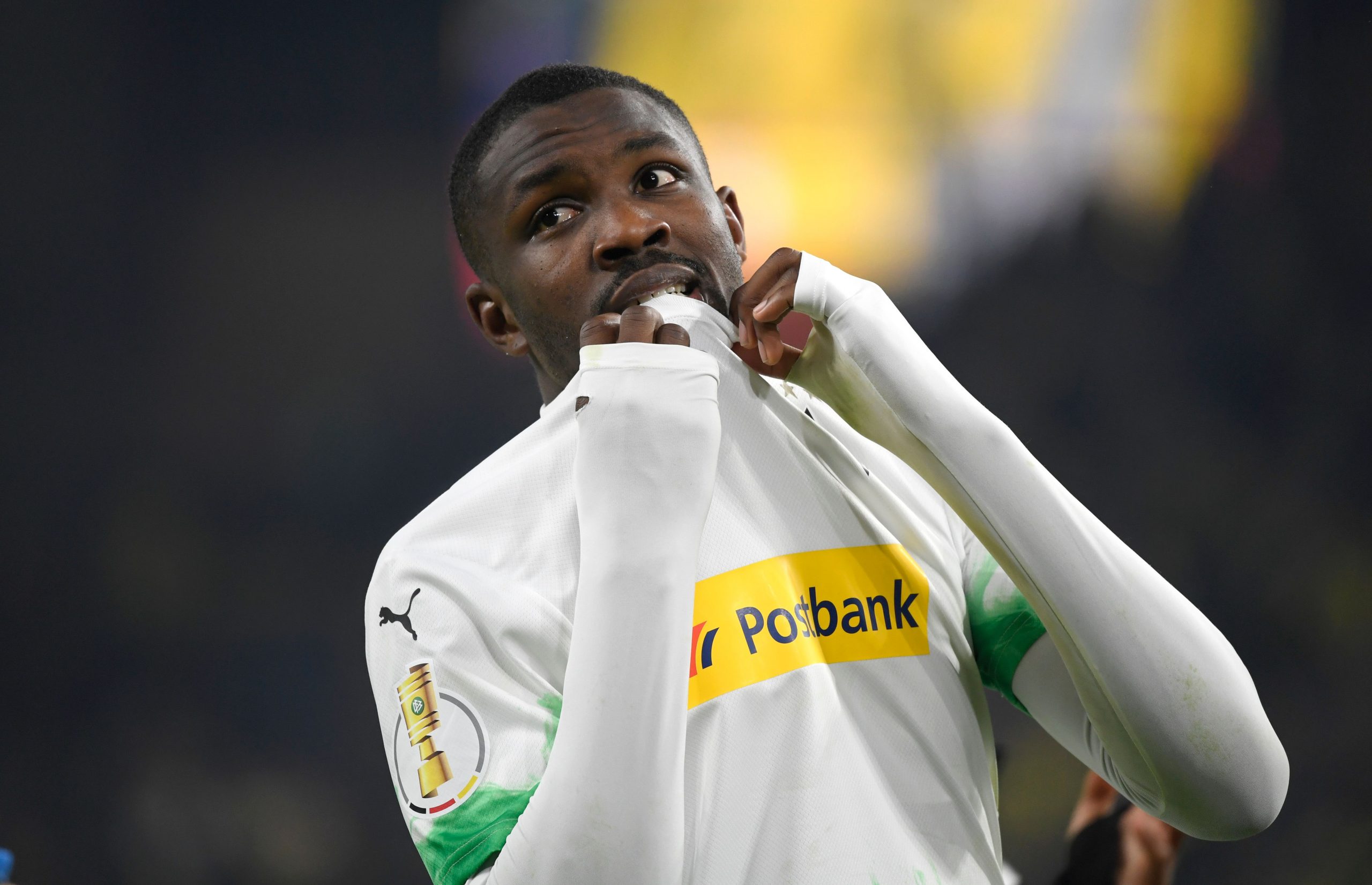 Missing a crucial penalty in the dying moments of a Brittany derby that would secure a win and help your team remain in the French top flight is surely the worst feeling in the world. But it is even more awful when the name appearing at the back of your shirt is “Thuram”.

The drama of Guingamp’s race against relegation culminated in Marcus’ miss in the last moments. Surely, it was not the way that Thuram would have ended his career with Guingamp. But putting aside his last game, his overall season was a source of high hopes, as the 6 ft 2 forward was one of his team’s best players. The big forward scored 13 goals in 38 appearances in all competitions and was probably the only clear source of satisfaction for Guingamp’s president Bertrand Desplat.

So when the summer transfer window came, selling Thuram became a priority for the chairman, as he adjusted to club to life in Ligue 2. Thuram eventually left Brittany on the 12th July 2019 for an estimated €9m. Even though Desplat had been asking for more, €9m seemed fair for a 21-year-old striker who had everything still to prove despite glimpses of potential at Sochaux and then EAG.

In joining Mönchengladbach, Thuram followed the footsteps of dozens of young French players before him. Success is not guaranteed when you move abroad at such a young age, but there were many reasons to believe that it would work for Marcus. Gladbach may not be the most well-known German team amongst French football fans, but it is a well-run club regularly challenging for European spots in Bundesliga.

More than the club’s sensible financial structure and steadfast facilities, it is firstly the favourable environment Thuram found at Gladbach that has helped him develop rapidly. At the club, Marcus encountered a French speaking group of players that made his arrival easier. Alongside French speakers Breel Embolo and Denis Zakaria, both from Switzerland, Thuram also met his current partner in crime: Alassane Pléa. The former OGC Nice striker, who had been at the club for a year, played a big role in Thuram’s integration. They’ve instantly become very close on and off the field.

Thuram move was also motivated by the appointment of Marco Rose as the new head coach. The 43-year-old German tactician, formerly at Red Bull Salzburg, was a key figure in the transfer. The young and promising coach is the undoubted mastermind behind Gladbach’s great start of a season. He built his reputation at Salzburg, leading the Red Bull team to a Europa League semi-final (which they lost to Marseille) and implementing a very attack-minded, Jürgen Klopp-imitating style of play.

He is part of a cache of new age German managers, that includes the likes of Julian Nagelsmann, David Wagner, Daniel Farke and… Thomas Tuchel. Jürgen Klopp, the father of gegenpressing himself declared in a recent interview before Rose’s appointment at Gladbach given to Sky Austria: “I completely trust Marco. He could succeed anywhere; he is the most in vogue coach at the moment, the one whom everybody wants”.

Rose quickly identified with Marcus Thuram’s key attributes and settled him into the starting eleven right away. Mostly switching between two systems (4-2-3-1 & 4-3-1-2), Rose uses Thuram’s versatility to destabilise the opponents’ defences. Indeed, the big forward can play on the left or in the centre of the attacking line. In the nine Bundesliga games before today’s fixture, during which he scored once and assisted another, Thuram had started five of them as a central striker alongside Alassane Pléa and four on the wings (three on the left, one on the right).

Despite his impressive build, starting on the wing has not been a problem for Marcus who appears to be very quick and lively with the ball. This impressive pace allows him to outrun defenders and create dangerous situations. But his best position probably is upfront. Three of his four goals in the Bundesliga were scored when Thuram started alongside Pléa, with whom he has built genuine chemistry. The two strikers are proving to be very complementary, Pléa’s instinct for goal matching perfectly with Thuram’s pace and physical presence.

Rose’s system is designed to leave a lot of freedom for Thuram to roam, who utilises his strength and stamina to consistently make dummy runs to open-up spaces for his colleagues. As mentioned before, Rose’s philosophy is on certain points very similar to Klopp’s, notably in how his Gladbach players press high during the entire game. Thuram plays a big part in this process. The forward has won 50% of his challenges since the beginning of the season and has shown uncommon tackling abilities for a striker, which allow Gladbach to get the ball back quickly after losing it.

It would be nonsense to compare Lilian and Marcus, as they are completely different footballers. But having such an iconic name on the back of his shirt is extra pressure that Marcus has had to contend with since he started playing at a professional level, and being the son of a French world champion obviously generates a lot of expectations. But among the 98 stars, few gave birth to successful professional players. As a matter of fact, Marcus Thuram seems to be the only one (so far).

One famous football family has demonstrated the difficulties for the next generation to live up to their father’s greatness: the Zidanes. From Enzo to Luca, none of Zizou’s boys have made their mark. For example, Enzo, the eldest, has struggled to settle at any club to date and now plays at Deportivo Aves, in the Portuguese league.

Thuram paid no heed to the media and the hype surrounding his name. Developed as a youngster at Sochaux-Montbelliard, which he joined in 2012, the giant Thuram played 43 games and scored one goal. He then discovered the French top-tier with En Avant Guingamp, joining Jocelyn Gourvennec’s side in 2016. The small Brittany side proved to be the perfect team for him to grow and improve in. He progressively became an important player in the squad and really stepped up as Guingamp’s main man last season, scoring 13 in all competitions.

Omitting his unfortunate final Ligue 1 game with EAG, his good performances in a relatively poor team allowed him to stay on the forefront of scouts’ minds and earn a deserved move to a bigger club.

Will he be as successful a Lilian? Only time will tell, but Marcus dreams big and never shirks from a challenge: just like his father.

Sadio Mané: “I am still far away from Messi & Ronaldo.”

William Saliba’s former coach Fabio Frasconi: “He has not always had this maturity.”