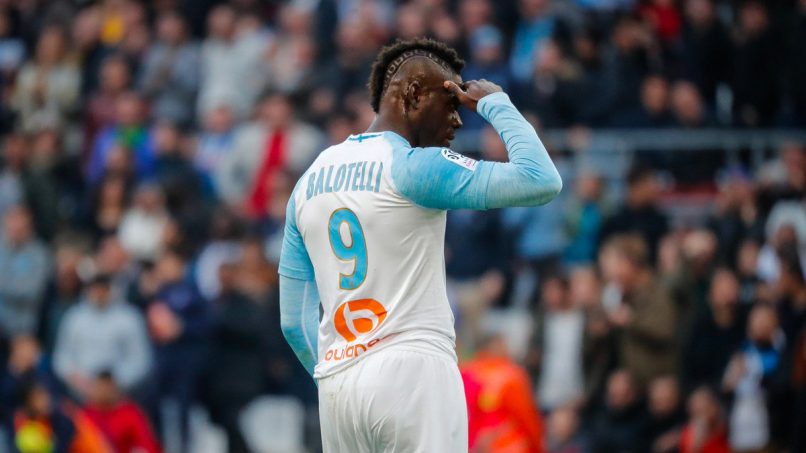 When Mario Balotelli was linked with Olympique de Marseille over the summer transfer window of 2018, many were sceptical about how a potential move would unfold. Though he is a talented footballer, the Italian international has been mired in controversy throughout his career, and OM’s public are not the most gentle when it comes to criticising their beloved team, to put it lightly.

Eventually, the move fell through after OGC Nice held firm over the demanded fee for their top scorer of the 2017/18 season. Balotelli, however, petulantly began to play truant from training during the window and Patrick Vieira could barely keep tabs over the location of his star striker. Although relations were patched up enough for him to return to the first team, things were never the same on the at the Allianz Riviera for neither club nor player.

By the winter break for Ligue 1, the former Manchester City man had zero league goals to his name despite over 750 minutes played and picked up five yellow cards in that time. His inexistent form and lack of discipline led to him reduced to a bench player, and Balotelli played his last game for Les Aiglons on 4th December, almost two months prior to his Marseille unveiling.

It is easy to see why onlookers are waiting for this move to end in disaster. Not only did Balotelli’s reputation of bad behaviour precede him, but he was out of form, fitness and seemingly becoming a mercenary. The club even handed the striker a contract of barely six months in anticipation of a potential catastrophe, though had to make him the joint top earner to do so, with Balotelli being given €500,000 before tax per month not including an alleged bonus for turning up to training.

But so far, his time in Marseille could barely have gone better. A debut goal from the bench gave reason to celebrate in an otherwise disappointing loss at home to Lille, an equaliser at Dijon led Rudi Garcia’s side to a hard fought win, and his instinctive twisting finish with his back to goal made sure of the three points at home to Amiens. Marseille fans were expectant of Balotelli in general, but surely even the most demanding supporters are delighted with three goals in four appearances.

Perhaps the most pleasing aspect of the move for Marseille fans and neutrals alike has been seeing a smile on the Italian’s face. After his goal against Amiens, Balotelli playfully mimicked Florian Thauvin’s earlier celebration, culminating in a warm embrace between the two forwards. There is no denying that Balotelli is a player whose emotion plays a heavy part in his form, and that has been reflected in his strong start on the field.

So why has he been such a success so far? Rudi Garcia looked set to be shown the door at Marseille just a few weeks ago, but now the former Roma manager is seemingly back in control of the dressing room and secure in his post. Between the end of October and Balotelli’s arrival, Garcia led his side to just three wins in 16 games in all competitions including a 2-0 defeat to fourth tier side ASF Andrézieux-Bouthéon. OM now boast three wins on the bounce in Ligue 1.

Super Mario provides a very different quality to Marseille’s attack that was not there before. Kostas Mitroglou, who was loaned to Galatasaray in January, was criticised by Garcia for his lack of distance covered during games. Truthfully, the Greek international’s running was not the problem, but his lack of goal threat. Mitroglou averaged just 2.3 shots per game in 2017/18 with Marseille, whereas Balotelli reached 3.9 shots per game with Nice in the same season.

Comparing Balotelli in a Marseille shirt with Mitroglou is like night and day. Although it does not always pay dividends, Balotelli is prepared to take shots from anywhere if he is given the time and space, nearly scoring with his first few touches against Lille. He oozes confidence for someone who has just joined a new club and who was out of form. Even when Mitroglou was scoring goals for OM, he never looked like he was at the top of his game, routinely missing simple chances, or picking the wrong option in the final third.

Although there is no comparison in playing quality between the two, you cannot help but feel that Balotelli’s confidence and directness gets the crowd going just like Didier Drogba did back in his heyday.

In addition to his own threat towards the opposition goal, his ability to hold up the ball and play with his back to goal allows Thauvin and other teammates to drift in behind the defence, and cause havoc themselves.

Aside from his footballing ability, the aforementioned chemistry with Thauvin is another reason why Marseille should be keen to extend Balotelli’s deal. Thauvin has made no secret of his desire to play Champions’ League football and said that next year he expects to play in the competition. If OM miss out on Europe’s elite tournament once again, Balotelli’s signature could convince Thauvin to give it one last shot on France’s south coast.

It has been plain sailing so far, but the challenge for Super Mario now lies in his ability to remain consistent. Throughout his career, he has shown flashes of brilliance, but has never scored more than 18 goals in a single league season. Garcia and the board will likely have to open their chequebook soon and secure Balotelli’s services for another couple of years if they want him to break that record in a Marseille shirt.