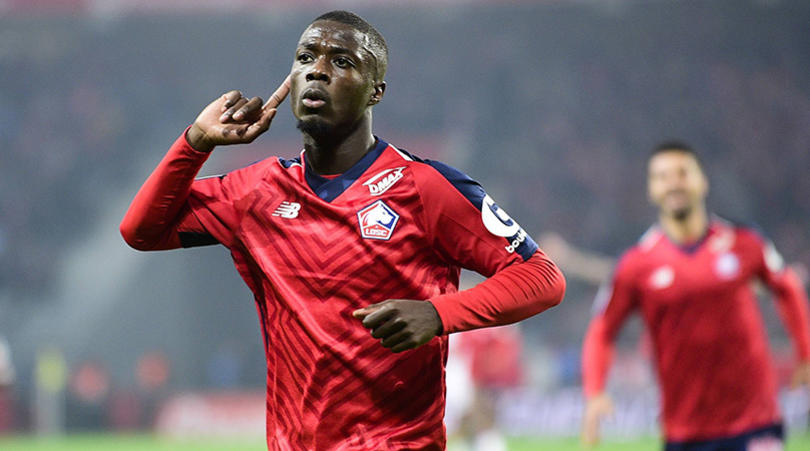 If you were standing on a dusty North Eastern Parisian touchline at the start of the decade, you might just have spotted a young Nicolas Pépé taking his first steps in club football. Born in nearby Mantes, Pépé joined Solitaires Paris-Est as a teenager, but in a very different guise to the marauding winger Lille fans know today. “We didn’t have a good goalkeeper at that time, so he played in goal. As soon as we went 3-0 up, he came out.” Guy Fraineau, president of Solitaires, told the Bleacher Report in April, “He played in goal for a whole season.” Instead of joining the ranks of Ligue 1 goalkeepers since, Pépé is beating them at will.

Initially not seeing football as a viable career path, as a goalkeeper or otherwise, Pépé told Onze Mondial that “everything changed” during his goalkeeping teens when his father, a prison guard, asked for a transfer away from Paris’ 19th arrondissement, eventually landing in the comparatively tranquil Western town of Poitiers. “That’s when I started thinking about football, I saw that I had qualities. I changed positions and realised that I could become a professional footballer.”

Spotted by the local then Ligue 2 club Angers in 2013, much has changed for Pépé. A supremely rapid and skilful forward with a rasping strike and a calm finishing ability, Pépé’s oddly spindly legs provide an unusual gate and a sense of unpredictability that has become increasingly terrifying for French top tier defences of late.

“In Ligue 1, in terms of potential, he is right behind Neymar and Mbappé,” Lille manager Christophe Galtier explained, while Sporting Director Luis Campos claimed he would “explode” when he arrived at a big club. Jose Fonté told the Ligue 1 Podcast that “kicking him” is often the only way to stop him. “He’s certain to become a world-class player because he knows how to do everything. He doesn’t need an intermediate step.” said Galtier.

As such, the Ivorian’s reported list of suitors reads like a Champions League quarter final draw, L’Équipe reporting this month that Liverpool, Arsenal, Inter Milan and Napoli had all met Lille’s €80m asking price. However, Arsenal have emerged as Pépé and his entourage’s preferred destination, barring any late hijacking from PSG – a club the player was holding out for.

Although reports of a minimal transfer budget may have been exaggerated to aid negotiations according to Sky Sports, who quoted Managing Director Vinai Venkatesham in saying “the numbers never come from us,” the signing of Pépé represents a substantial investment for Arsenal, and something of a risk as a result; Pépé has never played outside France and lacks any European experience after a solitary standout season.

That risk, however, is worth taking. Pépé’s highlights have been many in the last eighteen months under Christophe Galtier and he was many a Ligue 1 observer’s Player of the Year. Although his 22 league goal tally of last season is a little skewed by the fact that nine were penalties, it is difficult to ignore how Pépé gleefully led the charge as Lille obliterated PSG 5-1 in April, racing away to slot home a crucial second before providing assists for Gabriel and Jose Fonté to head a fourth and a fifth.

Overcoming a reputation for conservatism garnered across eight increasingly dull seasons with St Étienne, Galtier’s new found free-wheeling, bombastic approach played to Pépé’s, and Lille’s, strengths, having somewhat miraculously kept them up last term. Returning the forward to his preferred right wing role from the central striker position in which previous coach Marcelo Bielsa deployed him, Pépé’s lightning pace and unerringly direct style of play were matched only by partners Jonathan Ikoné and Jonathan Bamba, themselves enjoying breakthrough campaigns, perhaps unlucky to be overshadowed by Pépé’s head-turning displays. Amongst the French press Lille’s speedy attacking trio became known as ‘BIP’, a play on the sound made by the Roadrunner cartoon character.

Thanks to their ability to exploit space, Lille’s attack, supported by a well-drilled back line carefully marshalled by former Southampton and West Ham defender Fonte, often proved close to unstoppable when counter-attacking. An exacting move in January featuring Pépé’s swift feet and interplay with Bamba that ended St Étienne’s opposition in a particular fixture was typical of Pépé and Lille. Pépé won the ball back inside his own half before shimmying past Ole Selnaes and racing down the field to exchange passes with Bamba, eventually slipping the ball under Stéphane Ruffier.

The Ivorian’s pace, skill and composure also rounded off another lethal counter-attack to win the return fixture with three minutes to play later in the campaign. Marseille were dispatched in similar fashion at the Vélodrome in January while Pépé’s run and delightfully shaped shot complimented another assist and stand out display as an otherwise economical Nice were beaten 4-0 a week later. Devastating Pépé performances punctuated a rampant Lille’s league season as they finished a deserved second.

Despite that spectacular show-reel of virtuoso goals and assists, Pépé has benefited – as others have before – from (relatively) quietly going about his business in Ligue 1, a league that allows talent to develop and make mistakes a little further from the spotlight than those breaking through in the Premier League for example. Notably consistency is still a slight issue for the now 24-year-old, although he has clearly improved in this and many other areas this season.

Central to Pépé’s development under Galtier, and perhaps to his prospects with Unai Emery’s Arsenal, has been his new-found clinical finishing. The way he calmly latched onto Loïc Remy’s pass and nonchalantly slotted the ball between a covering defenders legs and into the far corner to give Lille the lead in a pivotal Ligue 1 encounter with rivals Lyon in December will give Arsenal observers hope that Pépé has the ability and composure to take his chances in the bigger games, in both Europe and the Premier League. Especially when Arsenal set up with a 5 man defence with the aim to counter at pace, as they did in their Europa League semi-final trip to Valencia for example. Pépé has repeatedly shown he is perfectly suited to such a gambit.

Although it is worth noting that, not having graduated through one of France’s famed academies and fighting his way up from the sprawling amateur divisions of French football, Pépé’s game has developed quickly and later than most. Admitting to Onze Mondial that “before I arrived at Angers, I didn’t really know tactics. I was shown how to position myself with and without the ball, how to take the ball. I did not realise it was so important.”

Although rough edges may need to be smoothed and performances at the AFCON were disappointing, likely due to fear of injury before his impending move, Pépé’s talent remains undoubted. Even excluding penalties, only Kylian Mbappé ended with more combined goals and assists in Ligue 1 last term and, as Sky Sports reported, the Lille forward was the only player to have over 100 shots, win 100 or more fouls and complete 100 plus take-ons in Europe’s top five leagues during 2018/19 while only Nîmes’ dead ball magician Téji Savanier finished with more Ligue 1 assists. A happy by-product of his conscious improvement in an attitude that has not always been perfect.

Pépé told France Football that coaches used to have to ‘scream’ at him to get a reaction, that he was too ‘nonchalant’ during his early career and that he only wanted to play for himself. Angers coach Abdel Bouhazama agreed, explaining to the Bleacher Report that “he played football like he was playing with his mates,” and that he would take Pépé and his team jogging past local bin men at 5am in an attempt to make them understand how fortunate they were to be a professional footballer. Pépé meanwhile often cites his fortune in being handed a reprieve having been caught stealing a chocolate bar when with Angers, initially fearing the sack.

Having been instructed to shave off a garish blond mohawk by Bouhazama, that attitude has changed since he played for the Western club’s senior side proper following a loan season with Orleans, where he was voted the best player in the third tier National, back in 2016. “Now I seek efficiency and I make efforts for others.” Pépé told France Football, “I am no longer someone who thinks only of himself. I have changed, become mature, I have evolved and I still hope to evolve. I do not want to shine for me anymore, but for the team.” In September, Pépé told L’Équipe that having “a little more responsibility” has been key to his rapid development and described himself to Onze Mondial as “a simple guy, very calm in life… open and kind, also very focused on his family.”

A decade on from his stint as Solitaires Paris-Est goalkeeper, having drastically altered his expectations, his position, his attitude and, soon, his club, Nicolas Pépé remains reflective. “Stay simple and humble” was his message to Onze Mondial. Pépé counts his somewhat unorthodox path from teenage keeper to £80m winger as a positive, ominously explaining to RMC: “I know how a goalkeeper moves in certain situations. I know where to put the ball.”

PSG forward Neymar has charges of rape & assault against him dropped