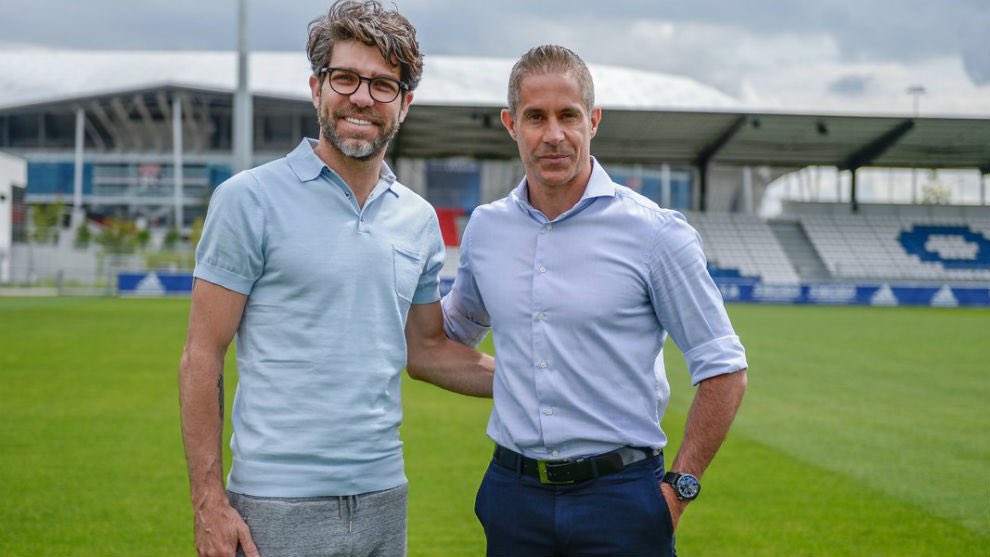 First it was Jacques Santini, then Paul Le Guen, then Gérard Houllier, then Alain Perrin, then Claude Puel and then Remi Garde. For many years it didn’t seem to matter who the manager was; Lyon were successful regardless. Seven consecutive league titles were won under the first four of those coaches at the turn of the century, Claude Puel took the club into the Champions’ League semi-finals before Rémi Garde added a Coupe de France title. The constant was President Jean Michel Aulas. However, with coach Sylvinho sacked after just 11 games, the first manager for some time not to be Aulas’s man, the 70-year-old president may need to quickly re-establish order and take back control. The Brazilian becomes the short-serving manager in the history of OL, beating Marcel Leborgne’s 13-match reign in 1988.

And yet it could have all been so different – two games in and OL were top of Ligue 1, having emphatically dispatched Monaco (0-3) and Angers (6-0). Houssem Aouar appeared ready to assume Nabil Fékir’s vacant throne, new signings (manager included) seemed to be settling nicely and the Moussa Dembélé – Memphis Depay partnership already accounted for 6 goals.

Now however, nine games and a painful derby defeat later, Lyon have added just one more win, they’re a point off the bottom of the Ligue 1 table, the newcomers have stalled and, already 12 points adrift of PSG, Sylvinho has been unceremoniously dispensed with. Now it seems, after a vitriolic end to Bruno Genesio’s toxic reign, the OL crisis was merely put briefly on hold.

While this free-fall back into the darkness was sudden, it is not wholly surprising as risk had characterised much of Lyon’s summer business. An untested Sporting Director in Juninho, shielded by overwhelming goodwill from fans as a club legend, a new head coach in his first senior management role, the sales of three key players (Nabil Fékir, Tanguy Ndombele and Ferland Mendy) and, perhaps most crucially, the relinquishing of control by President Aulas.

Although Aulas accepted last season that “When you’re an entrepreneur and invest €500m in a single stadium, life is full of risk-taking,” each of those gambles has, for now, failed. Juninho has yet to notably influence transfer policy (bench warming midfielder Jean Lucas aside) and his first managerial appointment lasted 11 games. Sylvinho’s reign quickly disintegrated as he failed to decide on his preferred team or system, with top scorer Moussa Dembélé oddly marginalised. Key new signings Jeff Reine-Adélaïde and Thiago Mendes are yet to show the full extent of their quality and Aulas seems to already be considering returning as the prime decision maker.

Having stated previously that Sylvinho’s appointment was not his decision and that “I will remain attentive, but I really will take a step back,” Aulas explained after Sunday’s derby loss to St Étienne that “It is up to Juninho to tell us what he wants to be done… All hypotheses are feasible. I will then make a decision.”

Although also stating that “we have to take into account the feelings of the players and other coaches in order to take the right decisions.” While his veto power may have always been evident, Aulas now seems much more disposed to use it.

Who actually initiated the removal of Sylvinho may prove crucial to the immediate future of the club, given that Aulas told Le Progrès in June that “we are able to spend €100m on the transfer market every year. I don’t know if we will, but we have that financial capability.”

Who decides how that mammoth sum is allocated each year will be pivotal to maintaining OL’s recent upward curve. Having been key to securing some impressive transfer deals in recent times, over three successful decades in charge, Aulas has repeatedly proven adept at making the right decisions.

Nevertheless it would appear that, given Aulas’ statements, that Juninho would have had to recommend Sylvinho’s sacking for Aulas to approve it, or at least offer it as an option. However, for Juninho to be so ruthless as to recommend his counterpart be sacked so quickly would be a surprise. As a result, where the power truly lies at OL remains uncertain.

Aulas however, speaking last month, was full of support for his new management partnership. “We have to be patient. Stability is the best protection against seesawing results. The proof, is that I have been running Lyon for 33 years.” Aulas told Le Parisien: “The Juninho-Sylvinho duo is a good duo. They are just beginning their lives as a Sporting Director and manager, and they are super bright.”

Le Parisien however reported on Monday that Laurent Blanc and Arsène Wenger were Jean-Michel Aulas’, rather than Juninho’s, prime targets to succeed Sylvinho. Aulas has recently flirted with the appointment of a higher profile coach, having previously stated that Lyon coaches needed ‘OL DNA’, something Bruno Genesio processed after a life long association with the club. Meanwhile, Lyon have only ever appointed two foriegn head coaches, of which Sylvinho was the second, and the Brazilian’s failure will likely push Aulas and the club back towards a coach with more knowledge and understanding of French football.

Wenger, despite not actually coaching in France since the mid 90s, arguably fits both these criteria. His focus on youth development and, traditionally at least, proclivity for an expansive style are aligned with the club’s view of itself. While the appointment of Wenger would be fascinating, considering his decline and increasing stubbornness during his final years with Arsenal, he also represents a sizeable risk for the same reasons.

Blanc meanwhile may know Ligue 1 well, leading Bordeaux and PSG to the title, but his record with young players and fluid attacking football at PSG, the natural flare of flat track bullies Zlatan and co aside, was disappointing even if his spell at the Parc des Princes has improved within the context of Thomas Tuchel and especially Unai Emery’s struggles.

Before the Sylvinho-Juninho ticket was announced this summer, both José Mourinho and Rafael Benitez were linked to the position. While a Mourinho-Aulas partnership might be entertaining for the rest of Ligue 1, it doesn’t scream ‘stability’. Not to mention José’s notoriously sparse success with young players or the club’s likely inability to afford the Portuguese, even if Mourinho has been making regular cameos in the French press; appearing at games and on L’Équipe’s front page.

Despite only recently settling in China, tempting Benitez back to Europe would represent the safer option for Aulas and Juninho; a largely consistent and intelligent coach well suited to Ligue 1’s pragmatic and nuanced football. Ironically, Claude Puel, having just signed for bitter Rhône-Alpes rivals St Étienne to end Sylvinho’s reign with a 1-0 win this weekend, might have been a good fit given his experience, consistency in France, having managed OL previously (2008-11) and having a talent for developing younger players. However, his relationship with Aulas is sour at best.

Whatever his decision, Aulas must think carefully before acting on Sylvinho’s replacement. Genesio’s reign ended with a club in crisis, fans protesting regularly, Aulas flip-flopping on a new deal for the coach and wild inconsistency only for Sylvinho’s style to quickly retreat into ultra-conservative pragmatism as results turned, despite a vibrant young attacking squad at his disposal. Clearly a thorough and considered coach, much like newly sacked St Étienne coach Ghislan Printant, Sylvinho may simply be suited to the assistant role.

In 2019, it has become clear that with unprecedented resources available, an abundance of raw youthful talent requiring moulding and a volatile fanbase desperate for a first trophy in seven years, the identity of the next Lyon coach now truly matters, more than ever.

Lyon to meet with Laurent Blanc