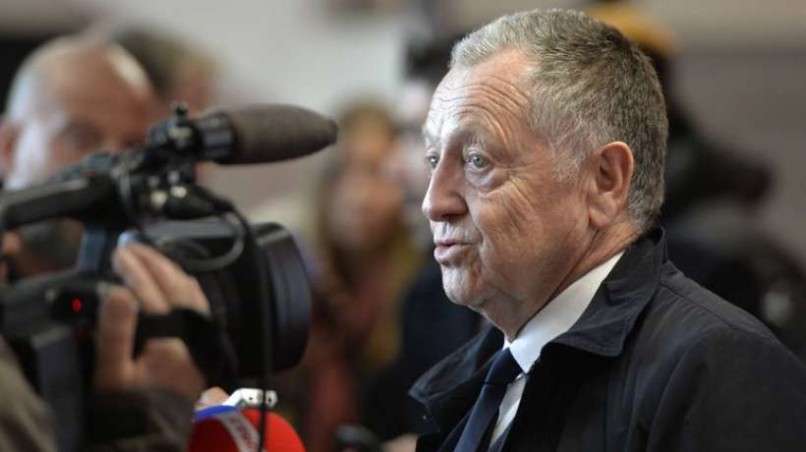 The end of the 2017-18 season in France beat to the rhythm of a viral Marseille chant. As the southerners galloped to a Europa League final in Lyon’s stadium – a final the Lyonnais had fantasised of playing in – the chorus “Jean-Michel Aulas, we’re going to break everything at your place,” (for the polite translation) became a rallying call for the re-awoken fervour of the Marseillais and inspired derivations throughout the country.

Although threatening, we can imagine that the song actually flattered Aulas as the centrepiece of their hatred. It was an implicit recognition of how much the club owes to their owner-president. And besides, “JMA” had the last laugh: Marseille’s defeat in the final and Lyon’s exceptional streak of nine wins in their last ten matches meant that OL would be the one to qualify from Champions’ League, not OM, as they so often have under his presidency.

Jean-Michel Aulas has run Olympique Lyonnais since 1987, and today man and club are inseparable. Reflecting on the club’s evolution under Aulas, manager Bruno Génésio told OLTV: “It has become an institution. More than a club, it is an entity, a culture, a label for quality.” His achievements have continually been celebrated throughout his career as an exemplary model of leading and developing a club.

His 70th birthday, on March 22, provided an opportunity to reflect on the accomplishments of French football’s greatest chairman. But in honour of Aulas’ entrepreneurial mentality, we must not only look back in retrospective, but also forward to the years he has left. He has suggested 75 as a retirement age. That may depend on how he fares in his quest for his only missing honour: a men’s Champions’ League title.

Much in the image of France’s 5th Republic, the presidents of French football clubs often personally control many powers and responsibilities in the day-to-day running of a club. None more so than Aulas, whose management of the club combines ruthless business skills with warm proximity to coaches, players, and staff. He attends almost every match including the women team’s and has a working relationship with most players. In public, Aulas adopts an intentionally misbehaved personality, making him one of the most divisive figures in French football.

From his provocative tweets to his feuds with referees, journalists, and rival clubs, it seems like the president does not miss a chance to steal the spotlight. But, as he admits himself, every declaration is calculated. When he tweets to criticise Memphis Depay, he wants the added public pressure to help the Dutchman realise that his attitude annoys more than just the president. When he questions the fairness of PSG’s means in the build-up to a confrontation, he takes the burden of attention away from his players and coach, only to better protect them.

From day one, Aulas has made use of his strong personality and fearlessness to achieve his goals. He was born and grew up in l’Arbresle, a town half an hour north-east of Lyon. His parents were school teachers, a highly respected profession in that generation, and enjoyed the regular company of intellectuals, such as the likes of Danielle Mitterand, who would go on to be First Lady and film producer Christine Gouze-Rénal. That is to say that he did not start from nowhere. Nor was he ever content: young Jean-Michel requested before a judge to be legally emancipated from his parents so he could start his own enterprise as a minor. In those days he was also a competent athlete and made some first division appearances with a Lyon handball club when he was 18.

The first big success of his entrepreneurial career is Cegid, a company he founded in 1983, specialised in the production of developing management and accounting software for corporations (worth €475m in 2016). In 1987, Aulas would turn his priorities to the passion of his second life. As OL were vegetating in second division, crippled by debt, his name was whispered in the corridors of power about helping put the club back on track. At that point, he was already well-connected within the fast-moving spheres of the city of Lyon, but also benefitted from the recommendation of another prominent, and infamous, French businessman in Bernard Tapie (former owner of Adidas and OM, notably). One staple of JMA’s career has been his friendships with, and influence over, fellow power-brokers.

Aulas took over a team with the likes of Rémi Garde or Génésio in it. Right from his first season, he asked for the phrase “Lyon, a European city” to be written on the kit, hoping to qualify for Europe within three seasons. In 1988 he called upon the old guard to successfully help Lyon return to Division 1: club legends Raymond Domenech and Bernard Lacombe served respectively as manager and Sporting Director. It was the start of a tradition in the Aulas era: calling upon those who have known, loved, and served the club. Nine out of his fifteen managers played for Lyon. Lacombe still serves as favoured friend and counselor to Aulas, alongside Gérard Houllier. Importantly, Aulas has almost systematically respected contracts with his managers: only Claude Puel and Alain Perrin were ever shown out by way of sacking.

A turning point in the history of OL under Aulas can be marked with the signing of Sonny Anderson in 1999. With the financial help of new stakeholder Pathé, a film company, the club was able to spend 120 million francs (€24m today) on Barcelona’s striker. In four seasons, the Brazilian scored 94 goals, and contributed to launching of a golden generation of French football history for OL. The Lyon team of the 2000’s was utterly unmatched, with its 7 league titles in a row between 2001 and 2008.

The full list of accomplishments achieved by club legend Juninho and his teammates is too long to go through. Their domination over Ligue 1 was hard-fought, but aggressive: Lyon regularly plundered other clubs of their talent, which was at best testing for Aulas’ relationship with fellow presidents. Some poor investments around 2010 put an end to Lyon’s French golden age, most famously the €22m spent on Yoann Gourcuff.

Aulas never rested on his laurels during those golden years. Dominating Ligue 1 was not enough. During this period, he continued to plan for the future with several projects. For one, Karim Benzema is emblematic for the formidable development of Lyon’s youth academy in the past two decades. Their academy persistently ranks among the top in Europe on the number of professional players produced. After Benzema, a number of other Lyon-born and trained players made their way into the first team and beyond: Gonalons, Lacazette, Umtiti, Tolisso, or Fékir, to name a few.

Also during the 2000’s, Aulas launched the women’s team of OL, which he turned into a European colossus thanks to pioneering investments. In 2004, OL bought the women’s team of FC Lyon and commenced a rapid professionalisation process, following the lead of his Montpellier counterpart and good friend Louis Nicollin. In 2005, the club was able to, admittedly temporarily, attract several big-name American players such as Hope Solo or Aly Wagner, the American professional league having gone bust two years before. In 2007, the women won their first league title, and have astoundingly been non-stop reigning champions since then. They have won five Champions’ Leagues since 2011 as well. To top this trophy hoarding, the Norwegian Ada Hegerberg won the first female Ballon d’Or last year.

His latest and proudest achievement, his crowning jewel, is the Groupama Stadium, inaugurated in 2016. Club-owned stadiums are rarity in France, as they are usually owned or co-owned by the municipality. Aulas was the man with the ambition and professionalism needed to move the team from its historic home in the central Gerland neighbourhood to the outskirts, in Décines. The stadium, a beautiful 60,000-seater, offers unprecedented opportunities in terms of revenue, hosting many extra events such as the upcoming semi-finals and final of the women’s World Cup.

It is also a piece of a larger project, “OL City,” which literally makes the club a physical place: the new training ground, shared with the women and youth academy teams, is adjacent to the stadium; along with the club museum; hotels; and possibly a basketball arena in the future, with JMA having started talks with the Lyon-based club ASVEL (owned by NBA star Tony Parker).

The construction of the stadium was a long process, slowed by opposition from nearby residents and Lyonnais taxpayers. OL were able to finance their own stadium but can thank the Grand Lyon metropolis for complementing the project with other essential infrastructure, such as the transport systems which connect to the stadium. €250m of public money was spent, with the help of influential local politician and friend of Aulas, Gérard Collomb, and a handy decree from then Prime Minister François Fillon, declaring the stadium a “project of general interest” in view of EURO 2016. These type of connections are illustrative both of Aulas’ success and his means to success.

Between his stadium and the mountain of trophies won, Aulas has secured his legacy. But a man like him only looks forward, and his white stag is still on the run: the Champions’ League. For the men’s team. Club football’s grandest trophy, nothing less. With his retirement date supposedly set for five years’ time, it is the project towards which he wishes to work. How does a man who “always gives himself the means to reach his goals,” according to Génésio, plan on achieving that?

The coming seasons will answer that question for us. To take such a large step forward, Aulas will likely need to re-think parts of his strategy, and he does not seem like someone afraid to do so. His first step will be to assert strength on the transfer market: avoid a talent drain, and bring in high-quality players, from outside of France. There has been improvement with regards to that: Aulas has promised a maximum of one major sale this summer, and the purchases of Depay or Moussa Dembélé show the club’s increasing attractiveness. The sale of 20% of the club to Chinese investors in 2016 is also supposed to increase available funds.

For some, the second change to make should be in the pedigree of the manager, by finding someone with top-level European experience. This might not be immediate, as Génésio seems set to sign for another two years. “Pep” has served more than honorably and criticism of him is not fully justifiable. Aulas has rewarded him with a new contract despite heated debates with fans.

The rumours last week of José Mourinho coming to the club still seem far-fetched. Famously, Aulas has described OL as a Formula 1 car, and recently repeated in L’Équipe, “the most important is the car, not the pilot.” In other words, not the manager. Given the hands-on and intrusive approach used by Aulas, a manager who seeks as much control as possible would indeed make for a complicated relationship. How far is he willing to go to re-invent himself?

Jean-Michel Aulas holds a unique position in French football, and the manner in which he constructed OL is exemplary not only for Ligue 1 clubs, but for clubs everywhere. In the public eye he likes to play a television series worthy character, but we cannot forget the two things that he fundamentally is: a builder and a businessman. He does not care to win a popularity contest and always looks to the future.

Today, the future for Lyon is partially blocked by PSG. The man who has played such a role in the regeneration of post-war French capitalism has been caught by another capitalist reality: an inability to compete with a club that is owned by a state. It is difficult to say that OL are even gaining ground on Les Parisiens at the moment. But it would be a dream for JMA to beat Paris to the punch on Europe’s biggest stage in the next few years, or at least upend them domestically.