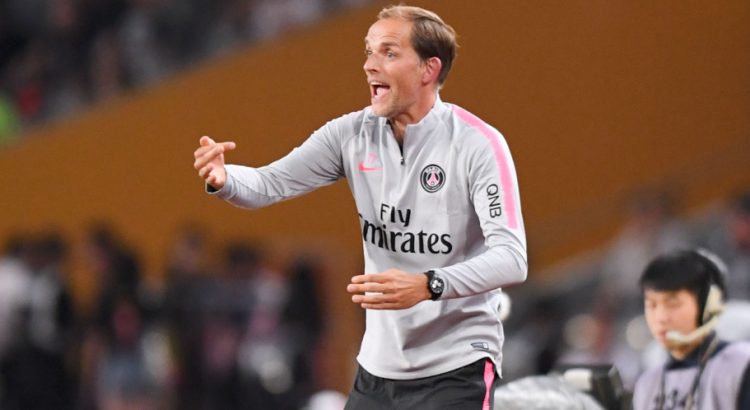 Given the wealth, the names, the titles and the dominance, it perhaps goes unsaid that the Paris Saint-Germain team of the last decade is the greatest in Ligue 1 for some time. That however, by PSG’s own measures of success, may not be the case. While Paris secured a sixth title in seven seasons before the 3-1 win over Monaco two Sunday’s ago, between 2002 and 2008 Lyon won 7 consecutive Ligue 1 crowns and, despite having far less resources, matched this Parisian side on a number of levels.

While a direct comparison carries the usual caveats of era, competition and football’s evolution both financially and tactically, the two dynasties carry similarities. No one manager is credited with either club’s success. Thomas Tuchel becoming the fourth PSG coach to claim a Ligue 1 title in recent years after Carlo Ancelotti, Laurent Blanc and Unai Emery. Lyon meanwhile, guided by Director of Football Bernard Lacombe, also head coach between 1996 and 2000, and passionately outspoken president Jean-Michel Aulas, won league titles under a quartet of Jacques Santini, Paul Le Guen, Gerard Houllier and Alain Perrin.

Although PSG’s 31-point margin of victory in 2016 remains an outlier, arguably a product of a competitive division behind them – Bordeaux, Marseille and Montpellier were all champions in the previous decade and all finished in the bottom half – OL too were capable of cantering to the title with ease. A 17-point gap to Marseille in 2007 and finishing 15 points clear of Bordeaux in 2006 stand out particularly. PSG meanwhile have also been challenged domestically, Monaco’s glorious 2017 title win interrupting their run.

Whilst Paris’ domestic cup record is far superior, putting the slightly different eras of European football aside, Lyon’s Champions’ League record remains comparable to PSG’s. Paris have four quarter-final appearances to Lyon’s three during their seven year periods of dominance. Lyon also made the semi-finals in the 2009/10 season.

Each side perhaps represents the archetypal top tier European clubs for their generations. PSG’s worldwide freight train of a brand, a club with bottomless pockets looking to compete with their peers in other countries while Lyon, carrying a little more history, were successfully run both commercially and sportingly by astute leadership with an eye for a player. While Lyon may have had years worth of foundations on which to build and the consistency and know-how of Lacombe and Aulas when compared to QSI’s outright Parisian revolution, although the Qatari’s resources may moot that point, Lyon harbour a more than valid claim to be Ligue 1’s 21st century gold standard. Although for PSG, their stranglehold on French football may have only just begun.

But does PSG’s modern dominance really matter? Unlike Lyon, PSG are seemingly assured of continued success for the foreseeable future given the current landscape of French football. However, as L’Équipe star columnist Vincent Duluc pointed out last week Monday after PSG again again secured their title, “Neymar and Mbappé weren’t signed to win Ligue 1.”

Bizarrely this has perhaps been both PSG’s best and worst season since QSI bought the club in 2011. Although Paris regularly tore inferior teams apart at the Parc des Princes under Emery and Blanc, under Tuchel their play has been largely at its most varied and effective for many years, having moved on from a predictable possession based approach.

However, with Champions’ League progress their only real aim, the crushing if unfortunate exit to a weak Manchester United represented the worst night under Qatari rule and perhaps in the club’s short 49-year history. “Even worse” read L’Équipe’s front page the morning afterwards in reference to the infamous 6-1 defeat at the Nou Camp two years ago. While in isolation the loss to United was something of an aberration, there remained an element of déjà vu. Each of their Champions’ League losses in the last five seasons, defeat to Real Madrid last season aside, has been characterised by missed opportunities and mental frailty.

The club are collectively at a loss on how to overcome such deficiencies – their loss in the Coupe de France final vs. Rennes being the latest example. Tuchel said after the win over Monaco: “We’ll have to think about a lot of things. With reliable players it is not necessary to change a lot of positions,” explained the German, “we can improve details and our possession game. It is necessary that we have a squad capable of providing intensity every three days.” Job one for Tuchel will be somehow negotiating QSI’s naive celebrity-driven transfer policy which has been an issue for the previous three coaches. The German has been outwardly critical of the depth of his squad of late, PSG not filling the bench for the fourth consecutive game two Sunday’s ago.

While Tuchel blames injuries, which have been prohibitive of late, naming just five replacements represents the making of a point more than anything else. As every club, PSG included, have younger players available to fill the gaps if needed, just as they did the defeat at Nantes last week. 20-year-old Turkish youth teamer Metehan Guclu scored off the bench, although Guclu and co were suspiciously absent on Sunday night.

That 3-2 loss to Nantes was one of three chances PSG have had to secure the Ligue 1 title but they were unable to take any of them. They drew with Strasbourg in Paris and were trashed 5-1 by Lille. This perhaps again underlines the club’s mental fragility having won 26 of the previous 29 league games without much fuss and became the first team in Ligue 1 history to score in their first 33 matches. Paris instead had to be presented with the title by Lille after they drew with Toulouse.

As a result of their slow finish, Tuchel’s belligerence on squad size in press conferences and the Manchester United Champions’ League defeat, title celebrations (and even the title itself) seemed a little hollow. L’Équipe referred to belated scenes of celebration an hour after the final whistle, in which Presnel Kimpembe and Julian Draxler drenched Eric-Maxim Choupo-Moting with champagne as an ‘ersatz party’. While Duluc explained in his column that: “It’s time to say bravo, to salute a dynasty and wait until tomorrow morning to remember that such power is a little futile if a dream fades three times in a row in the Champions League last 16.”

As their aims are set so high, and their potential so great, Paris can only disappoint in France. Perhaps the best thing that could happen to PSG would be a backer comparable to QSI with similar designs on world domination buying out Marseille or Lyon to aid intensity and give some meaning to domestic success. For now, as Lille coach Christophe Galtier said two weeks ago, “They will be Champions, everyone knew that from the first week.”

As it stands, although proved possible by Leonardo Jardim in 2017, OL and OM – neither of whom have won a trophy since 2012 – nobody is able to threaten PSG’s points total on a regular basis. Although Monaco threatened to become that rival after Russian billionaire Dmitry Rybolovlev’s 2012 takeover, the club now insist that their focus on youth and development was always their aim and that initial outlays on James Rodriguez, Radamel Falcao and João Moutinho were designed to inject some initial quality. Rather than Rybolovlev’s frustrations with FFP, for example, being the cause.

Perhaps the only bright spot for PSG in 2019 has been the continued rise of Kylian Mbappé. Ably assisted by Angel Di Maria, the 20-year-old has practically carried PSG since Christmas, his hat-trick in the 3-1 win over Monaco again underlined his importance. Although Mbappé has admittedly enjoyed increased responsibility with Neymar injured since January, he became the youngest player to score 30 goals in a Ligue 1 season and only the second Frenchman, after Jean Pierre Papin, to do so in the last half century. Those 30 goals came in just 27 games compared to his total of just 13 last term where hosts of chances were missed as Mbappé’s influence often proved intermittent.

However, following his devastating displays at the World Cup in Russia, Mbappé seemed to return broader, hungrier and with a new desire to be a squad leader. Fortunately for PSG fans, Mbappé seems to be committed to Paris for now, saying as title celebrations began: “I am signed up to this project at PSG. Good for Real Madrid that they have Zizou back, I will watch their matches as an admirer.”

Nevertheless, perhaps worryingly for the rest, Tuesday’s L’Équipe devoted two full pages to what Mbappé can still improve upon. Six main areas included his heading, body language, defensive work and impacting big games. Despite his hat-trick against Monaco, somewhat frustratingly the deference Mbappé afforded Neymar last term reappeared as the Brazilian returned from his long injury at half-time. Their interplay was “a little too much,” said Tuchel afterwards.

Despite hollow domestic success and perhaps being responsible for the worst night in the club’s history, Tuchel has started to affect change at the Parc des Princes this season. Displays away at Napoli and at home to Liverpool in the Champions’ League were some of PSG’s best under QSI, the team proving more streetwise and tactically diverse. Nevertheless, their most demoralising European exit to date, a meaningless league title and continued issues with squad building and mental hardiness all underline the fact that PSG still have a long way to go. Just ask Gregory Coupet, Sidney Govou and Juninho Pernambucano.

You can read more content from Adam on his blog.

The Get French Football News Awards 2019 – The Nominees

The PSG dressing room has begun to isolate Thomas Tuchel