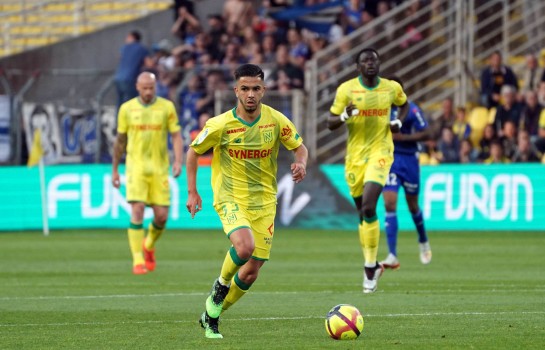 We all love a story of an academy prospect stepping up from being a boy to becoming a man, turning dreams into reality for the club he’s been a fan of. In modern football these days, it’s becoming rarer and rarer to see these homegrown talents make it into the first team as more and more clubs turn to the transfer market and big money to fill the gaps in their teams rather than looking to home for the solution.

However, in Nantes, one 20-year-old starlet and lifelong Nantes fan could be about to make that jump from academy to first team. His name is Imran Louza and although he may not be a household name to fans across Europe yet, 2019/20 could be the year that changes and sees the young star from La Maison Jaune break out onto the big stage all around Europe.

Born in Nantes on 1st May 1999, Imran Louza joined Les Canaris at the age of 7 and made his debut for Nantes’ B team in 2017 at the age of 18. Although being born in France, Louza’s father is Moroccan and due to this, Louza represented Morocco twice at U20 level and scored once but has since opted to play for Frances U20 and U21 sides in 2019.

Louza made his Ligue 1 debut for Nantes on the last game of the season, playing 88 minutes in a 1-0 defeat at home to Strasbourg, which saw the home side fail to take their chances. He played on the left-hand side of a midfield three and had a quiet game, with a few good touches of the ball, but unfortunately he was not able to contribute decisively as his side gave away all three points to Strasbourg.

In an interview given by Nantes FC in 2017, the then 18-year-old Louza spoke of his admiration for Andrés Iniesta saying: “Andrés Iniesta (is my favourite player) for his vision of the game.”

His admiration for the legendary Spaniard shows on the pitch too. A defensive midfielder by early trade, Louza has transitioned to a more advanced position playing for Nantes’ B team and has been deployed further forward, as a right winger, for Nantes this season in Ligue 1 too.

When one thinks of Iniesta, it’s almost impossible not to think of his footballing intelligence, his partnership with Xavi for both Barcelona and the Spanish national team being one of the greatest of all time and Louza us showing early signs of possessing this same game intelligence. Pierre Aristouy, Nantes’ B Team manager, spoke of Louza saying, “He’s a smart player, who respects the game and sees the obvious. As he knows how to adapt, one can be tempted to use him in several positions.”

Louza has admitted himself that his game lacks decisiveness and this can sometimes show playing higher up the pitch, however his vision, technique and calmness on the ball has made up for this for now. Another challenge facing the young Frenchman is his height. Louza is short in stature standing at 5’10” and with a physique not quite ready for the demands of Ligue 1 and this has affected his ability to dribble, as he has averaged just 0.6 dribbles per 90 this season in the top flight.

Louza had been working on his physique in the past year however and will continue to do so, adding more gym work to his program and it is only a matter of time before he will be physically ready for regular first team football.

In the seven Ligue 1 games that he’s featured in during campaign, the 20-year-old has put up decent numbers across the board, making a combined two tackles and interceptions and taking 1.6 shots per 90, however there’s far more to Louza’s game than just mere statistics.

Louza is a natural born leader, having captained several of Nantes’ youth sides as he has progressed through the ranks. Speaking in an interview with Jean-Marcel Boudard for Ouest-France, Louza showed his maturity that has undoubtedly led to him being given the captain’s armband at so many different youth levels.

Speaking about his first international call up to the Moroccan U20 side, Louza talked about how he had turned down previous invitations in order to wait for the right time to make his debut saying, “This time, I accepted because I thought it was a more important moment than the others. I felt it could be a good experience and give me visibility.”

Nantes are flying high in Ligue 1 this season sitting 2nd with 19 points from 9 games, however according to the Understats xPTS model, this should be more like 11 points and according to their xG model, Nantes are the 2nd worst side in Ligue 1 going forward with an xG of 7.84. This means that there’s a big opportunity for Louza to step up, put his leadership skills to good use and get Nantes firing on all cylinders again to keep up their strong, if somewhat lucky start to Ligue 1 this season. However, per the LFP, we will not be seeing Louza in action during the next 3 matches – he has received this suspension for entering the pitch in an amateur match that he was watching after one of his best friends, Souareba Diakhaby, was badly injured following a tackle made by an opponent. Louza rushed on in the midst of fighting between the two sides to get him on the phone to his mother, per 20 Minutes.

The longer term future is however bright for Louza and for Nantes too. They have a true talent on their hands here, one that could potentially come to captain the club in the near future and lead one of France’s most successful clubs historically to their first piece of domestic silverware, since claiming their 8th Ligue 1 title way back in 2001.