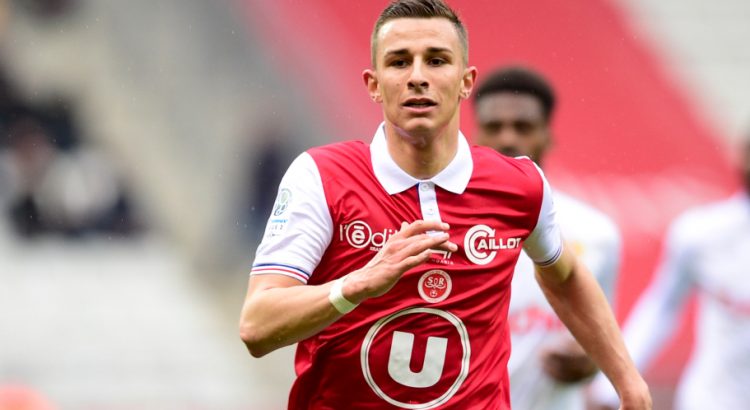 Had he not reassured Get French Football News, “No, no, I prefer the red kit”, at a public event in December, we might have thought Rémi Oudin fancied himself as a Real Madrid player. Indeed, his first five league goals this season have come while sporting the Merengue-themed 3rd kit of Stade de Reims, commemorative of the 1959 European Cup final between the two clubs. And going back a little further, his first ever goal in senior football was in a friendly at the Bernabeu, in 2016.

But Oudin is a Stadiste through and through. Born in neighboring Chalons-en-Champagne, he joined Reims in 2011, aged 15. Alongside now Rennes striker Theoson Siebatcheu, he lifted the U19 league title in 2015, completing that season with 22 goals and 17 assists. As a local boy and youth academy graduate, he had already won the hearts of Reims fans in Ligue 2. And aged only 22, he has the second most appearances for the club out of the current squad, after Pablo Chavarria. Now the club’s top scorer this season (six goals in Ligue 1, two in the Coupe), he has revealed himself to a greater French audience.

The jovial forward now consistently starts as an inverted winger on the right of David Guion’s 4-2-3-1, but in Ligue 2 he frequently appeared as a one of the wide midfielders in 4-4-2 or occasionally as a supporting striker. At the start of the season, Guion explained the advantages of his new position to France Football: “He often faces play with his left foot, in order to either make the last pass or try his luck, knowing that he is a skilled finisher.”

Not so much a playmaker or a dribbler, the Frenchman serves sometimes as a wide pivot, either on goal kicks or in play, so his teammates can transition forwards. His one-footedness means he is not a proficient crosser on the right flank, but he prefers to cut inside on his much stronger left foot. This movement is exploited by Reims as a way of drawing in defenders and creating space for right-back Tomas Foket’s attacking runs. Equally, it is with these runs from the outside inwards that Oudin finds most of his chances.

Though a sharp finisher and possessor of a good first touch, Oudin’s passing is not his most flattering quality. He successfully completes an average of only 11.5 passes per match, only a 57% passing accuracy though. It must be said that his team’s style does not help him in improving those statistics, however. Reims can competently play out from the back or use possession to draw out their opponents, but generally the forwards get involved in play it is for quick, direct attacks or counter-attacks. Hence Oudin’s three assists despite his low passing success rates.

One quality that is expected by Guion of his forwards is to contribute to the team effort in defence. Le Stade would not have the 2nd best defence in the league without the whole team’s involvement, and in that respect Oudin has put to use an impressive stamina. His repeated defensive efforts throughout a match do not hamper his participation in counter-attacks. Recently, he has added some bulk to his 1.85m stature, making him a more coriaceous adversary on both ends of the pitch.

It was in October that Oudin’s first made headlines in Ligue 1, with an insolent brace to give Reims a 2-0 win in Rennes. Three times since then he gave his side the lead only to draw 1-1, away to Lille and Toulouse (with his right foot!) and home to Nice. The latter was probably his best of the season; bringing down a chipped pass from Alaixys Romao with his chest and slipping the ball past Walter Benitez with a half-volley. Last week, against Rennes again, he started and concluded a blazing counter to secure another 2-0 win. These contributions have been crucial to the club’s ongoing series of nine matches without defeat. He also scored in Reims’ first win in four years in the Coupe de France, against Lens, and again later in a mad eight-goal tie against Toulouse where les Rouges et Blancs went out on penalties.

Today, Stade de Reims travel to Montpellier, another robust defensive side. As with Rennes last week though, they may be tired from their midweek efforts, whereas Oudin and his teammates are fresh. The conditions are set for a typical ambush from Les Champenois, 7th in the league. And though he may never play for Madrid, it is a chance for Rémi Oudin to take one step more towards becoming a household name in Ligue 1.

Didier Deschamps held meeting with Karim Benzema before selecting him

Karim Benzema is back for France – will wear #19

Arturo Vidal: “I respect what Jorge Sampaoli is doing as manager of Marseille.”