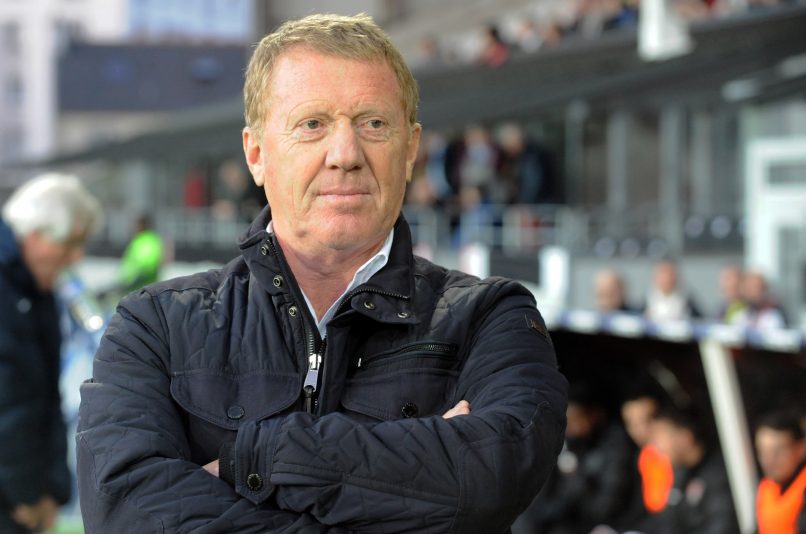 This article is taken from Get Football’s European Football publication, The Modern Footballer. In this feature piece, Jeremy Smith looks at the indelible mark that the French “Sir Alex” left on the game. Print and digital copies available here.

On 29th August, USL Dunkerque welcomed Ligue 2 football back to the Stade Marcel-Tribut for the first time in 24 years. Back in the professional ranks of French football, this should have been a cause for great celebration. However, the occasion was overshadowed by the tribute paid to former USLD player and coach and son of the city Alex Dupont, who had passed away earlier in the month, after suffering a heart attack.

News of Dupont’s shock passing at just 66 was met with huge sadness across the French football family. Although not the most high profile of France’s great coaches of the early 21st century, his achievements in football – and more importantly his philosophy on life – meant that ‘Sir Alex’, the affectionate nickname which also adorned the back of all the USLD players’ shirts in tribute, will be greatly missed.

Born in Dunkirk in 1954, Dupont suffered early tragedy aged just five, when his father René was killed in a road accident. He worked in the family fishmonger’s but, at 18, decided to pursue a career in football, spending the majority of his playing days with his hometown club, as a workaday midfielder. Perhaps conscious that he didn’t have the talent to earn his fortune on the pitch, he found innovative ways to supplement his income, as his cousin and lifelong friend Philippe Bialski recalls: “After matches we’d take the car and he would DJ in the nightclubs of Nieuport. There would be barely 300 people there, but it gave us some pocket money and some memorable nights. He was great on the decks.”

Dupont hung up his boots aged just 30, to take up management at US Dunkerque, as it was then called. This enabled him to remain close to his family roots, often inviting new signings for a fish dinner at his mother’s or grandmother’s. It wasn’t only his players who benefited from his generosity and hospitality. Journalist Didier Dupuis recalls: “I found a job as a journalist in Dunkirk. I knew no one and took a coaching course with the USLD third team. The coach was Alex Dupont. He asked where I was staying that night. I told him I was returning to Lille. He said ‘let’s go to Borel [a Dunkirk bistrot] for a pint. He then took me home, offered me his spare room and I stayed there until I found a flat.”

The new responsibility did not prevent him from continuing to let rip at the city’s annual carnival – particularly in his role as a member of the Corsaires Dunkerquois philanthropic organisation (co-founded by his father) which would see him, dressed as a pirate, acting as cheerleader at the Corsaires’ annual ball.

Managerial duties remained Dupont’s priority though and under him the club continued to punch above its weight, maintaining its Ligue 2 status. The club was eventually relegated in 1996 and Dupont took the opportunity to cut the apron strings, eventually finding himself, in 1998, at another small club with a proudly impressive Ligue 2 record: FC Gueugnon.

In his first season with les Forgerons (the Blacksmiths), Dupont led the club to an impressive sixth place finish. His second season, however, sealed his and the club’s place in French football history. The hotch-potch of journeymen put together by Dupont – with only a young Sylvain Distin a household name – made it all the way to the Coupe de la Ligue final. Standing in their path were cup specialists and the richest club in France, PSG, featuring the likes of Jay-Jay Okocha, Laurent Robert and Ali Benarbia. “The commentators said to me ‘Alex, try to hold on till half time, we don’t want people changing channels”, Dupont recalled. A half time score of 0-0 was if anything harsh on the underdogs; second half goals from Marcelo Trapasso and Sylvain Flauto secured a deserved win as Gueugnon became the only ever Ligue 2 side to win the trophy. Dupont, only 46 and encouraging an attractive, modern style of football with overlapping full-backs and ball playing central midfielders, was the toast of the town, despite narrowly missing out on promotion: “It [the cup run] cost us, but how can you have any regrets after that?”

Dupont moved on that summer to Ligue 1 Sedan and again demonstrated his coaching excellence. The team’s 5-1 success over PSG proved that his cup final win was no fluke. Les Sangliers just missed out on being champions d’automne as Dupont’s achievements spanning two seasons helped him earn the France Football Coach of the Year 2000 award. Sedan were as high as third as late as March, eventually finishing in fifth and qualifying for the UEFA Cup – again achieved with barely a well known footballer among the squad.

Keen to experience something new, Dupont soon moved on to stints in Qatar and the United Arab Emirates (with a short tenure to save Laval from Ligue 2 relegation sandwiched in between) but didn’t find the experience entirely stimulating (“the day passed and the following day you couldn’t remember what you had done the day before”).

Dupont returned to France and was soon coaching the French police team to the European championship – though not before taking over at another struggling Ligue 2 outfit, Brest. Dupont recalls receiving the Brest job offer: “I was in Innsbruck for the Euro qualifications with the French Police when I was asked if I was up for the challenge. We played the match and luckily we won it in extra time – if it had gone to penalties I wouldn’t have been able to stay.” Dupont immediately brought his ability to bear at Brest, saving them from relegation, then guiding them to promotion the following year (earning the Ligue 2 coach of the season award in the process) and then helping them stay in Ligue 1 the following season.

An unsuccessful stint at Ajaccio, followed by a slightly disappointing return to Brest, followed. He then carried out some scouting work for Hervé Renard’s Morocco ahead of the 2018 World Cup before retiring, having held out for another Ligue 1 or African job that never came.

Perhaps, despite his success, Dupont no longer fitted into the changed values of modern football. Many of his quotes over the years paint the picture of a traditionalist who was slightly ill at ease with the direction in which some aspects of football were headed. He observed that “I like top-level football, but I also like the grounds that smell of chips and beer. Football isn’t played in VIP lounges, even if they are part of the backdrop”.

A sentimentalist under the boisterous, fun-loving exterior, he always shared a special bond with his players, and felt that this was something else that the less seemly aspects of the modern game was lacking: “There is a dehumanisation. Twenty years ago, if a kid had a bad game you’d invite him to yours – ‘what’s wrong? Come round for dinner.’ Today that’s over. Players’ mentality has changed. We live in a more egotistical world. And in a football world ruled by money there’s an inflationary trend caused by agents. They are part of my world but not part of my job. They exert influence on increasingly fragile and young players. It’s immoral. That’s what’s disgusting. They jeopardise not only the player but the person. They lie to them because it’s all about their interests. And the more transfers there are, the more … anyway.”

Dupont’s love for his players was clearly reciprocated, with many lining up to pay tribute to him. Steeve Elana, for example: “He had a big effect on me. He always wanted to win, but also taught us to be able to lose. It’s rare to have a coach tell you that you are allowed to lose if your opponent is better. It was his way of lifting the pressure.” Or Richard Socrier: “He was Sir Alex. He liked to laugh, to tease, to be inventive in training. He was a good man who loved football but also loved to remind you that football wasn’t everything and that you had to take full advantage of life.”

And that was something that Dupont enthusiastically did. Whether returning to Dunkirk (Dupuis: “He’s a pure Dunkerquois, among the dockers, the fishermen, the carnival”) and supporting local charities (Bialski: “we have a charity that helps the homeless, the poor, the refugees; Alex was a humanist, he regularly made gifts but asked me not to reveal his name”) or riding across Brittany with his beloved wife Ghislaine (“I’m a fan of Harley-Davidsons. We didn’t do Route 66. It was more Route 69…”), Dupont loved to share life, love and laughter with others.

Retirement suited him. He divided his time between his pied-à-terre in Senegal, where he had planned to spend his senior years with childhood friend and another prematurely departed coach Bruno Metsu (“with Bruno it was never-ending days of parties…unfortunately he left us early, the idiot!”), doing some occasional coaching at the nearby football academy; and his home in La Turbie in the south of France, where he would play the occasional game of padel with Didier Deschamps.

Unsurprisingly for such a bon viveur, Dupont has gone with so much more life left to be celebrated. The planned get together to mark the twentieth anniversary of Gueugnon’s Coupe de la Ligue win had been postponed because of COVID. And Dupont, when asked for the first stadium he’d visit once crowds are allowed to return, was unequivocal: “If I was given the choice, it would be Dunkerque’s first match back in Ligue 2. I have such a strong image of Dunkirk … those are my roots and I played and coached there.”

Dupont’s sad passing – perhaps poetically the night of the final ever final of the Coupe de la Ligue – the competition that made him a legend – deprived him of those two special opportunities to commune with the people he loved. But his players, his friends, his fellow Dunkerquois, were also deprived of the chance to remind Sir Alex how much he was loved. As Eric Boniface, his defender at Gueugnon, put it so simply and powerfully: “he was a good coach. But he was above all a great person.”