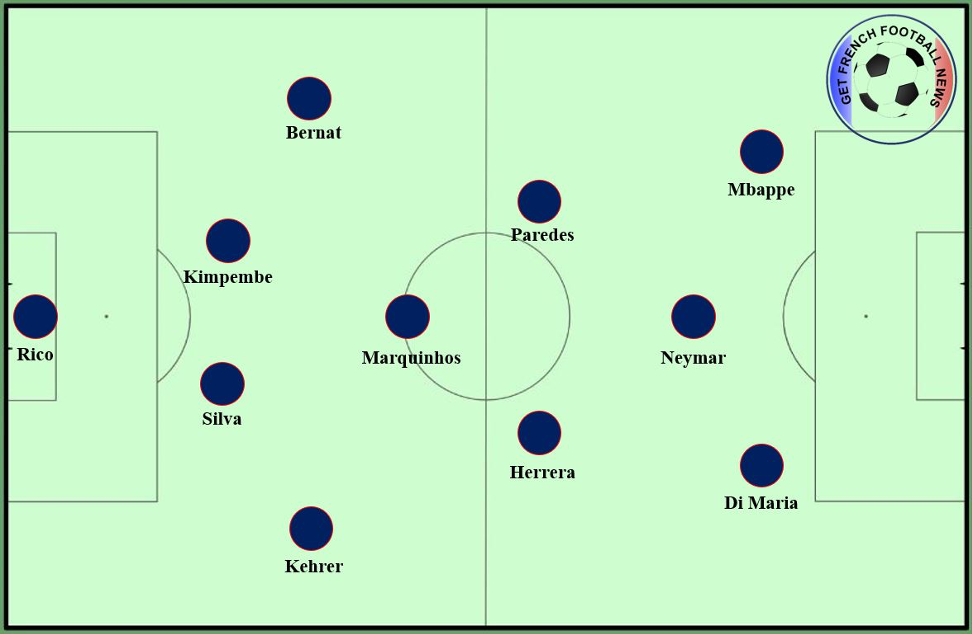 On Tuesday, Paris Saint-Germain and RB Leipzig faced each other in the Champions’ League semi-final. While it was the first time in 25 years that the French outfit reached this stage of the competition, this semi-final was a first for the German side. A dominant performance gave the perennial French champions their first ever trip to the final of European football’s biggest competition.

With Ãngel Di Mari­a coming back from suspension and Kylian Mbappé finally being fully fit, Thomas Tuchel had more options to begin the game with. However, Keylor Navas and Marco Verratti were injured and not fit to start. The German coach opted for a 4-3-3 with Neymar as a False 9, a similar setup to the Atalanta game. Mauro Icardi and Pablo Sarabia got benched, Mbappé and Di Maria starting the game instead. Leandro Paredes took Idrissa Gueye’s place in midfield but the rest of the squad was unchanged.

PSG’s high press to prevent Leipzig to play their game

PSG adopted a high press against Atalanta and they decided to keep the same strategy against Leipzig. Leipzig rely a lot on being fluid in move construction to create chances and to have the confidence in what they can do. This was seen against Atlético Madrid where they had time to find teammates in between the lines and combine in tight spaces. PSG’s high press nullified their fluidity as they often had to go long instead of circulating the ball from one side to the other, waiting for the space to attack into.

Neymar was PSG’s most important player in that regard, leading the press with 25 pressures applied, the most throughout the game. For someone who was rightly called lazy off the ball last season, the Brazilian has definitely changed this mentality this campaign, and for the better.

Not only did they force Leipzig to go long, PSG also capitalised on their high press as they brought Péter Gulácsi, Leipzig goalkeeper, to make mistakes. In the 6th minute, Mbappé scored after Neymar recovered a long kick from Gulácsi. The Brazilian did so with his hand, therefore the goal was disallowed. However, PSG did capitalise with this strategy on their second goal, highlighted below.

Each PSG man was in close proximity with a Leipzig player, preventing Péter Gulácsi from progressing the ball on the ground and centrally, therefore forcing him to either play a long ball or a difficult along-the-ground ball in a wide area. Gulácsi missed his pass to one of his midfielders and Paredes recovered the ball. He passed it to Neymar who ran into depth and passed the ball to Di María who scored.

With a PPDA (Passes allowed Per Defensive Actions) standing at 8.96, slightly above their season average in the Champions’ League, PSG prevented Leipzig from playing their game. Worse for the Germans, they decisively capitalised on their opponent’s mistakes.

PSG and how they approached their build-up

While PSG adopted a 4-3-3, Nagelsmann opted for a 4-1-4-1 in a mid-block where they weren’t pressing the centre-backs. They were packing the middle of the pitch, something that Tuchel anticipated, which was why Paredes was starting. PSG needed someone to progress the ball higher up the field. The midfielder alternated between dropping deeper to form a back three with Presnel Kimpembe and Thiago Silva and sitting a bit higher, on the same vertical line to Marquinhos, as seen below.

This created numerical superiority for PSG in deeper areas and allowed Paredes time on the ball to pick the right forward pass. However, the main issue a side faces when they drop a midfielder deeper during build-up is that it becomes less likely that you can successfully progress the ball in between the first and the second lines of your opponent when they pack the middle of pitch. PSG would have struggled to progress the ball in between the lines if they didn’t place Neymar in the half-space. This is depicted below.

Paredes was able to find Neymar in between the lines on multiple occasions. Two of them are highlighted here. With Marco Verratti out, Paredes was the only midfielder able to break Leipzig’s lines. Targeting Neymar on the half turn was the best way to create danger in the final third, as he is PSG’s most creative player. The midfielder ended the game with nine progressive passes, the highest amount for any player on the pitch.

With Leipzig adopting a three at the back formation, PSG decided to attack the channels between Leipzig centre-backs. With Kylian Mbappé, who excels in his off the ball movement, it appeared as a good strategy. At any given opportunity, they attacked space when they spotted it. In the still below, we can see Mbappé running into depth despite Leipzig not providing much space at all between their defensive line and the goalkeeper. Ander Herrera was still able to pass him the ball into feet but the French forward didn’t win his 1v1 against the goalkeeper.

In the second still, Kylian Mbappé receives the ball and Neymar spots the space in between Dayot Upamecano and another Leipzig player. The Brazilian runs into depth and goes 1v1 against the goalkeeper. Unfortunately, he misses it.

Ultimately, PSG’s third goal came from another run into depth. This time, it was from Juan Bernat, PSG’s left-back. Thanks to his run, he made Leipzig’s defence move deeper. He got the ball but didn’t initially score from the chance created. However, the ball came back a few seconds after and the Spaniard eventually put the ball in the net following a Di María cross.

PSG created most of their chances through running in behind Leipzig’s defensive line. They could’ve scored from two of those situations earlier in the game were Mbappé and Neymar to have converted their chances.

Thanks to a well executed plan, PSG reached the Champions’ League final for the first time in their 50 year history. The first 10 minutes in the second half where Leipzig seemed to get back into the game aside, Les Parisiens were in full control. While their xG stands at 2.8, they prevented Leipzig’s xG to get over one (0.8 in fact).

As Julian Nagelsmann said, “In the end, PSG’s ticket to the final is well deserved. We needed a goal to get back into the game but instead they got it. Our belief was gone and in the end it was a case of character, and we did better in the second half. That’s football, sometimes it’s hard.”

The French side will now face Bayern Munich on Sunday for what could be an historic night for them.

Eduardo Camavinga: “I am Rennais, it is quite simple.”

Rennes in advanced talks to land Islam Slimani for €8m