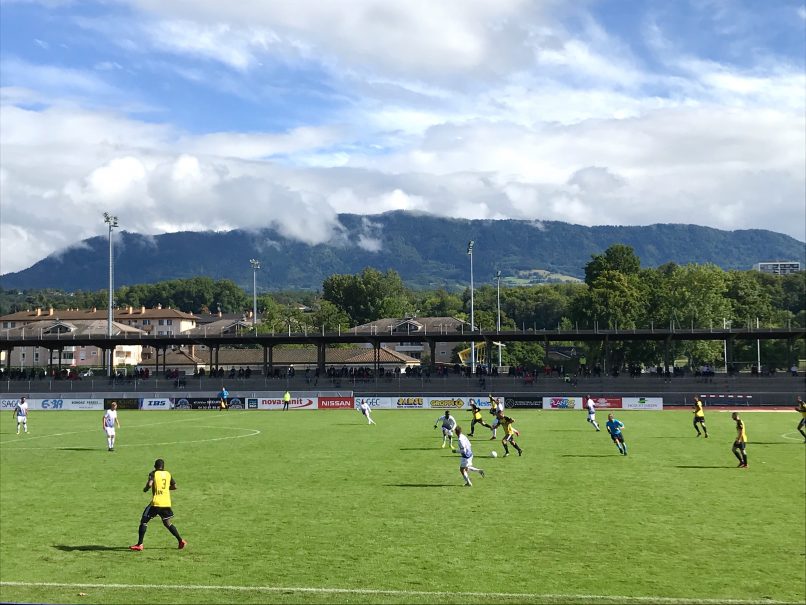 This season, with crowds limited at 5,000, Ligue 1 football is hard of access even for season ticket holders. What better time to discover the lesser known riches of French football? In this new series, Get French Football News allows you to discover these scenes: lower divisions, women’s leagues, and more! Today, we start in Thonon-les-Bains, where an ambitious plan to bring professional football back to the area is brewing.

It is a bustling area, that of Lake Geneva, or Lac Léman for non-Helvetic francophones. The wealth of Switzerland and the beauty of the French Alps combine to make it a resplendent holiday area, ranging up to the most luxurious tastes. Away from the yachts and the slopes, a the flat stretch of land separating France’s biggest lake from the climb towards the mountains above is just wide enough to accommodate a few football pitches.

In Thonon-les-Bains, the less famous neighbor of Évian-les-Bains, there is room enough for three or four pitches at the sporting complex. This is also the home of the Black Panthers, one of the best American football teams in France. It takes a connaisseur to find the Stade Joseph-Moynat in this residential neighborhood.

No beer or food in sight, everyone sits masked with two empty seats on either side. It’s a strange feeling, having to stretch to debate with your far-away neighbor on the match. Tongues only start to loosen at half-time, as the spectators stand and mingle, trying to hear each other over the unfortunate choice of atmosphere music that is Ed Sheeran.

“Remember Evian’s fuchsia and yellow third kit?”, asks one fan, aptly dressed in a bright pink hoodie. In Haute-Savoie, traces of Evian-Thonon-Gaillard’s existence are still scattered. At today’s match, sweatpants featuring the defunct club’s red and white Croix de Savoie badge are almost as common as those belonging to its successor, Thonon Evian. ETG was the first club from the département ever to play in first division, between 2011 and 2015.

Born from the ashes of bankrupt Evian-TG, Thonon-Evian first re-appropriated the name of Thonon, historically the more successful football town, with ancestor Thonon FC having played in Division 2. Further, and amusingly frequent, name changes have yielded the current “Thonon Evian Grand Genève FC”. You will recognise Geneva not to be in France, of course, but “Grand Genève” refers to the administrative community of French municipalities in the greater Geneva area, one of which is Gaillard, a footballing constituent of ETG. Still with me?

On the pitch, it’s a difficult start for Thonon. Two days of rain have made the pitch soggy. Emmanuel Imorou, who as recently as last year was a Ligue 1 player and AFCON quarterfinalist for Bénin, has to be substituted after 13 minutes, due to injury. The first goal comes out of nowhere: a high shot from bulky 18-year old Jordan Radojevic deceives the goalkeeper as it dips behind him, in the middle of the goal. TEGG have their first 5th division goal.

For Chambéry, Nassim Akrour tries to respond quickly with a similar trick. The former Algerian international, still playing at 46, sees former Brest goalkeeper Alexis Thébaux off his line. The 40-meter shot lands on the top netting of the goal.

On a free-kick, Chambéry attempt an imaginative combination: Three players position themselves to potentially shoot, while two others stand in front of the ball, hiding it from the defence’s view. They jump to the side right as the shooter makes his run. He hits the wall, and as Thonon break into a rapid 2v2 counter, Chambéry manager Cédrid Rullier screeches his anger: “Why does it take five of you!?”

The away team’s supporters are present – louder, even. One of them has an ear-piercing air horn he rings at every attack from the black and yellows. A defender cuts down a Thonon player and the referee’s whistle blows. “Mais non!”, howl Chambéry fans in unison. “Mais si, mais si”, comes the reply from all around them.

There are more grumbles from the visitors as bite-sized defender Corentin Saint-Bonnet picks up his second yellow 40 seconds into the second half. Both fouls were committed on the significantly larger Jean-Bryan Boukaka. The disparities in shapes and sizes of footballers are amusingly accentuated in lower divisions.

Now the game is one-way traffic. Mohamed Mara, signed just days earlier from Ligue 1 side Lorient, is a dazzling addition for Thonon’s second half. He speeds past the Chambéry defence once, twice, and on the third time there are no defenders following, the pass is slightly behind his run but he flicks it out of the air with his heel, cuts toward the keeper and just barely chips it over him. 4-0. The air horn went silent. Thankfully.