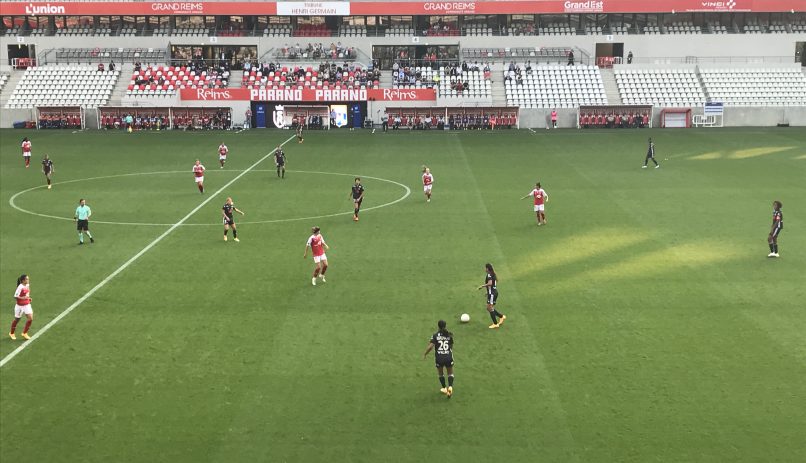 For Episode 2 of our series “Beyond Ligue 1,” Get French Football News takes you to Reims, in Champagne, where an early-season women’s league match pits seven-time European champions Olympique Lyonnais against troublemakers Stade de Reims.

The privilege of Olympique Lyonnais is not just being the best-financed and equipped team in the country: it is also being treated as such by all the other teams. Their away matches are often not held on the usual home pitches of D1 teams, being instead moved to larger stadia as other clubs try to capitalise on the presence of the famous OL. Welcome, then, to the Stade Auguste Delaune, a 20,000-seater in the heart of Reims, where Stade de Reims play in Ligue 1, and where the “gala” matches in Division 1 Féminine are held.

Last year, the Reims-OL fixture produced the best match of the season in Division 1. It was a chaotic 7-3 win for Lyon, a large win, but SDR’s spirit still provided a shock for the Rhône side. Then-promoted side Reims were the first team in over 10 years to score 3 goals in one match against Lyon!

In fact, this Reims side are creating a reputation for themselves as one of the most bonkers teams in the league. In their first match this season, they went 4-1 down to Bordeaux despite scoring in the first minute, only to tie it up in the last half-hour, 4-4!

Bordeaux are a strong side, who this week drew 0-0 with Lyon’s main rival PSG. Lyon are something else though and watching them play against mid-table teams illustrates just how impressive their athletic and technical abilities are. As the game kicks off, the disparity is instantly apparent.

Dzsenifer Marozsán’s ability as a playmaker is one rung higher than anyone else, Delphine Cascarino is just too fast on her right-hand side, and Nikita Parris is too mobile and persistent in her runs as centre-forward, in the absence of injured Ballon d’Or Ada Hegerberg. The Englishwoman scores the first goal, an unchallenged header from Cascarino’s cross.

By alternating strong vertical passes with quick sideways deflections to create overlaps, Lyon have an infallible construction in their attacks. Generous in their efforts, Reims live up to their trouble-making reputation with a determined press that sometimes catches Lyon by surprise. Defensively, though, they are unable to cope with their opponent’s level. Marking stands out as an area for improvement, including on set piece situations where too many Lyon players are forgotten and left open.

The second goal, though, is an own goal from a seemingly benign Lyon cross. And for the third, Reims fans can only applaud when Cascarino sets up Janice Cayman with a deceiving backheel, leaving the Belgian alone with a wide view of goal.

The fans at Auguste Delaune, usually so quick to boo their men’s team if the result is not positive by half-time, today are quieter and more courteous. Perhaps feeling muffled by their masks, they rarely break out into chants and prefer applause. The same is true for the OL Angelles, a hardcore group of travelling Lyon followers, who are few to follow their megaphone-wielding leader in song.

The home crowd eventually finds a scapegoat in the referee, who signals a penalty for Lyon. Amel Majri jumps to the ball, and asks Wendie Renard, the usual taker, if she can have this one. The captain says yes, but the left-footer hits it over the bar.

The match ends with a spectacular and frightening collision between Selma Bacha and Melissa Herrera. Bacha, a young left-back for Lyon, was sent off after slamming her full weight at high speed into the Costa Rican’s head. Herrera is stretchered off and taken to the hospital immediately, but thankfully suffers from no major injury.

The most embarrassing mistake of the match, however, is made by the stadium announcer. During a Reims substitution, he reads out the shirt numbers of the players involved while attributing the names of the Lyonnaises corresponding to those numbers… The error raises some eyebrows in the stands, but based on overheard conversations, the Rémois are still learning about their own players too. 3-0 it ends.

If we are to pick out two names for them to remember, let them be the following two. First, goalkeeper Phallon Tullis-Joyce, who Get French Football News met at her arrival in Reims 18 months ago, and who is now captain. The American’s powerful kicks seemed magnetised to the opposition’s Wendie Renard’s head, but she once again demonstrated her ability as a shot-stopper, notably with an incredible save to deny Eugénie Le Sommer’s shot in the top corner. Second, Kessya Busy. At 19 years old, the forward looks younger still. But her frail frame hides a phenomenal acceleration which made her a nuisance for OL all match long.

Lyon may have bought Naomie Feller from Reims last January, but there is too much talent in this league now for them to hog it all. The pack is toughening up and defending trophies is all the more challenging. So far, we can only marvel at the persistent motivation needed to maintain their supremacy.