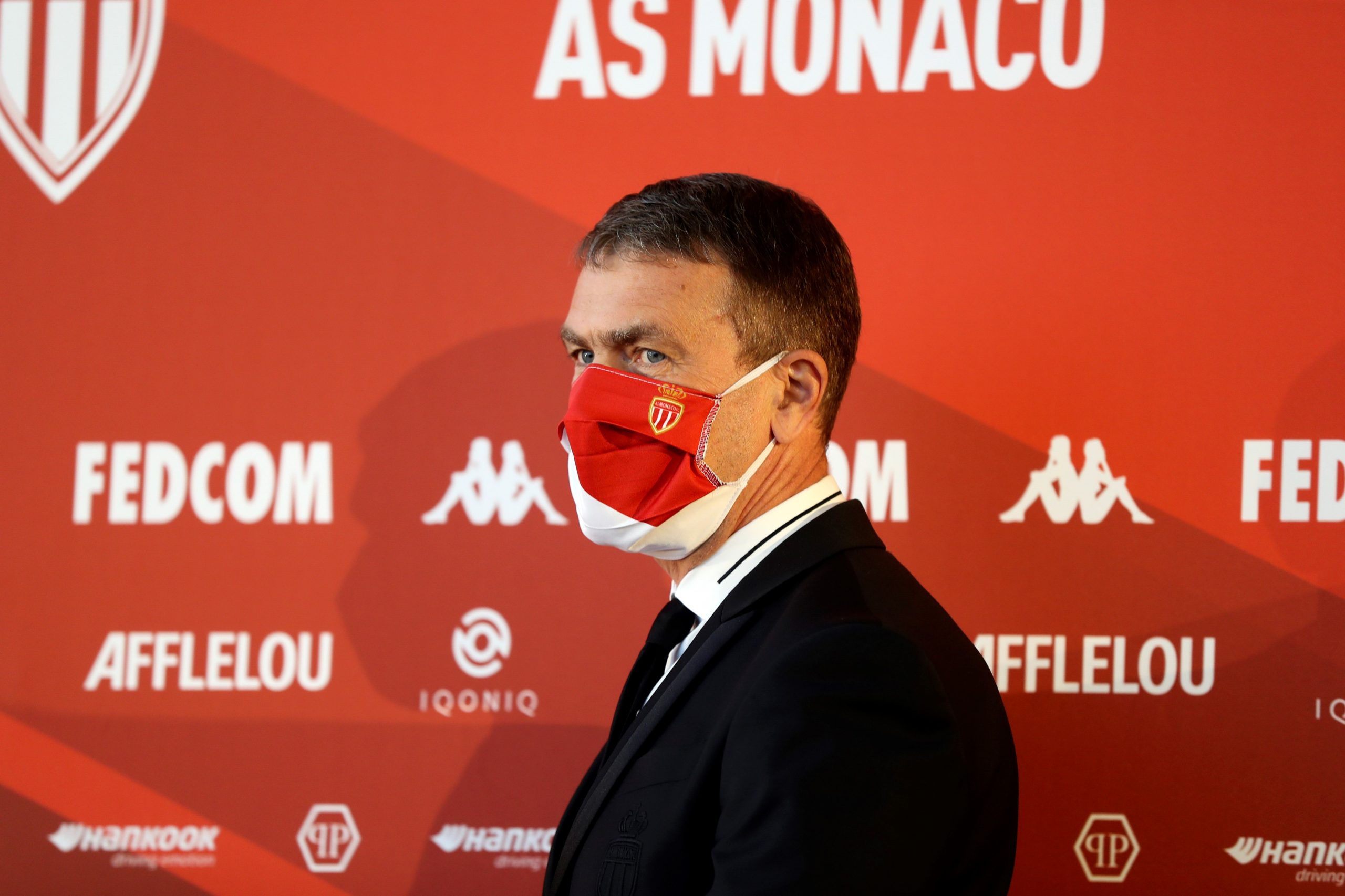 Oleg Petrov is a discreet man on the European football scene, but his stock is rising. Brought in by AS Monaco owner Dmitry Rybolovlev to replace Vadim Vasilyev in February 2019, the former Urakali Mining executive comes from an exclusively business background.

“I’ve worked in Africa, Europe, the United States and all around the world, witnessing the fall of the Soviet Union on the way and the changing landscape of the modern world before I arrived to this position… I met Dmitry in 2001, I started working for one of his companies, Urakali, the big mining group in Russia. I progressed in that company for a number of years. I saw how passionate he was about football, I witnessed the happiness in 2017 when they won the championship… then in 2019 he called me, I saw the performance of the club was struggling quite a bit, but I know it is a strong club and the president is a very strong person, he called me and proposed this challenging position. I did not think a lot, I said I will join with pleasure.”

Petrov did have a short dalliance with the idea of becoming a professional goalkeeper in his early teens, and still remembers being hurt by the fact it didn’t work out, having dreamed of emulating compatriot and legendary shot-stopper Lev Yashin:

“Football was a very popular game in the former USSR, a street game, in which all kids played, it was hockey during the winter and football during the summertime… I played for a short period of time for a football club in Ufa, in the position of goalkeeper, but I did not happen to become a professional football player. I wanted to excel in this job as well, but my coach came to me and basically recommended to me that I look for another position or to change, and I was emotionally impacted by this. But it was a smart decision, football needs the best performers. Why waste time. You miss school and then you miss out on football, and everyone loses. A direct approach, maybe a bit hard-line, cruel at the time. But in the end it was exactly what I needed.”

In a 60-minute appearance on Get French Football News’ Presidents Podcast, Petrov showed that he has rapidly attained a strong understanding of the world of football, despite being in it for a little over 18 months. His strategy is clear – double-down on replicating the successful implementation of strategies at the world’s currently highest-performing clubs – namely in the domains of data-driven decision-making and building the most athletic team in France.

“The role of agents was a new, in a way, area for me. And the strength of their role and their power is remarkable, I agree, but they are part of the ecosystem. But the world is changing as well… I see that the power of analytics is amazing and I see that this area is getting more solid. The role or ability of someone to come and say: “I have this player; he can be good for your team and he costs like this.” I think that these times are changing. It goes along with the specifics of each country and league, but I think in general top performers and top clubs will rely on data… We are delivering the performance centre in 2021, with a lot of new technical facilities, it is a significant investment done by our president Dmitry Rybolovlev and that will contribute even more to this aspect of our team.”

He is not in this fight of returning Monaco to its 2017 heights alone, having hired English and ex-Tottenham, Southampton and RB Leipzig football operative Paul Mitchell, “a humble, smart and intelligent man,” as the Sporting Director in summer of this year.

“It took us some time to identify what we needed for long-term success, when I met Paul for the first time, he impressed me, both as a person and as a professional. He is very modern in terms of feeling where the game is going to: very much on data, deep data, advanced, a lot of analysis. From him I heard for the first time the requirements on the athletic skills side, and that is where football is moving to. Being an athlete first, and a footballer second.”

Petrov admits that it took time to convince Mitchell to join the project at the Principality:

“It took time and some effort actually to make him join us. He was successful at Red Bull Leipzig. He believed in our ambition.”

When pressed on whether he was concerned that Mitchell had never been afforded such wide-scale responsibility at a club before, Petrov responded with confidence:

“It was not a concern to me because I think that I saw his qualities and then he is doing this very successfully. You are right that the Sporting Director has by far a broader area of responsibility. Currently, Paul is covering all sporting life of our club. Managing the teams, the medical areas and everything basically. Leading the club to the future.”

One of Mitchell’s first acts was to push for the departure of Robert Moreno, who took over from Leonardo Jardim as manager in December 2019, with the Englishman pushing for the arrival of Niko Kovać instead, with the Croatian seen as a coach who more neatly matched Mitchell and Petrov’s playing style ambitions.

“The team did the analysis and identified that the physical and athletic elements needed to really improve, and so the goal is to become the most physical and athletic team in the league and then they started implementing the changes. To be successful in today’s game you have to be extremely fast, aggressive, with running, quick in transitions, maybe quicker to the goal in a certain way. So, it exactly reflected our vision.”

“Robert did a good job. If we didn’t lose our last game with Nice, in the last second of additional time, most likely we would be in Europe this season. Bringing in Niko was about bringing in someone more in line with what Paul believes the club is about. Robert was good, but Niko is a coach with more experience with 1st teams in Germany, German clubs and Croatian clubs, a player himself so he is a leader. Very strong. Very charismatic with the players, managing the players, you see that when he talks the way players behave is outstanding. Monaco was a club that required a change at the start of the championship. Paul convinced us that this was the right thing to do. Niko has his own style, very intensive, attacking football. Results driven, less ball possession, what we had with Robert, his own specific style which reflects his personality, very athletic, always on attack and quick transitions. Paul believes that is the exact coach who fits Monaco DNA at the current stage.”

The positive results, although still small in sample size, have been immediate, following the bold changes made by Petrov in summer. AS Monaco, who sit just two points off PSG at the top of the Ligue 1 table with 12 matches played so far this season, beat the current Ligue 1 champions 3-2 in the first game back following the November international break. 33-year-old midfielder Cesc Fabregas, brought in by Thierry Henry in January 2019, had increasingly looked like a poor piece of business, but he is enjoying a renaissance of faith and influence under Kovac, and was decisive against Les Parisiens.

“It was an interesting game. That is why people love football so match. Cesc is a very intelligent, smart player, with a lot of ambition, a lot of leadership qualities and it is really amazing how he made his entry, it is not the first time, but the first time in a game of this calibre, but on a couple of occasions his entry into the game brought about a good change. As it was rightly said, he is maybe not the fastest runner but he is still one of the fastest thinkers in the team.”

Monaco’s current squad most closely matches the alchemy of the Leonardo Jardim title-winning side in terms of mixture of high potential youngsters and experienced heads, an exciting reality that Petrov is aware of, as the conversation turned to the exciting deeper-lying midfield duo of Youssouf Fofana and Aurelien Tchouameni.

“The young boys are the recruits of the last year, I think they are 19, 20 years old. Indeed, last year we had more experienced midfielders with some of them being far better-known, renowned in the world. It is amazing how this year the young boys are doing a very good job and not looking second to those very, very famous players. I think the mixture in the team of young players, like Fofana, Tchouameni, Benoit Badiashile, Axel Disasi and players like Cesc, Wissam Ben Yedder and Kevin Volland, this is making a remarkable mix and a successful team.”

The Luis Campos-inspired transfer strategy of signing young players cheaply, giving them plenty of exposure and then exporting them for major transfer fees to the rest of Europe’s elite brought Rybolovlev success initially, but also was taken too far, with the club spending close to a combined €45m on teenage strikers Willem Geubbels and Pietro Pellegri in 2018 and the duo having scored just three times between them since their arrival. Petrov wants to avoid over-emphasising on this as a mode of operation in the project’s second-coming:

“I think what happened after Monaco won the championship in 2018 and early 2019 when things started getting worse, all this prompted our president to rethink the strategy and sharpen his views. Of course, trading will remain as one of the pillars, but what we put as the central pillar of our thinking is to deliver the sporting success, playing at the top of the French championship and in the top European championship. And use the means we have, then making smart trading only as a consequence. Trading will be the consequence of our performance. It is not just about record sale and record transfers.”

Want to Bet On Penalties? – Consider These Aspects Before Starting