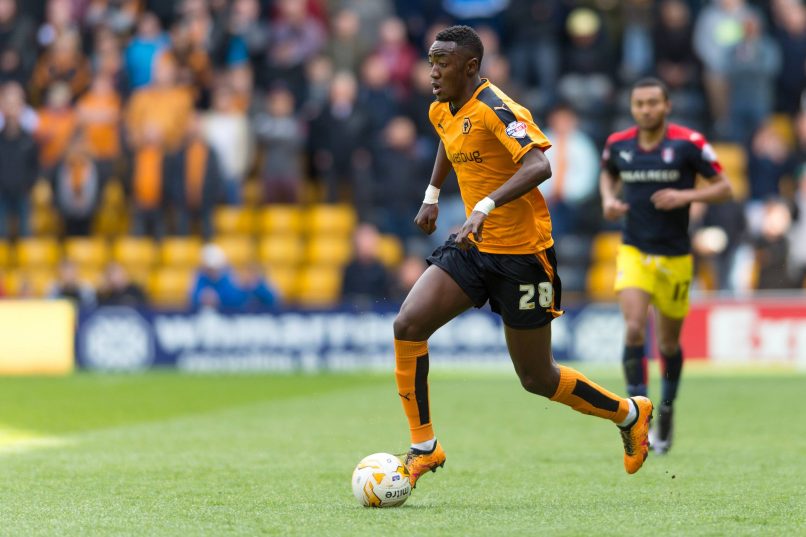 The last time you sat down with us to have a chat, you were a Wolves player. And I believe you were about to go on loan at Bury, which would be the first of a couple of loan spells during you time in England.  Now that you’re finally settled, how do you look back on this period?

I was in a process of learning and I was very young… probably 19 or 20 years old. It was a period in which I was learning every day and for me it was necessary to gain experience and keep on improving myself.

Among the various English clubs you were loaned out to, you played at Portsmouth where you were coached by Kenny Jackett. A man you knew from your time at Wolves, right?

Indeed, I met Kenny when I was at Wolves. He is basically the man who made me a professional, who made me discover the top level. I remember, he needed a left-back at Portsmouth. So I went on loan there but I was, at the time, in a transitional phase towards my natural position, which is centre-back. So my experience at Portsmouth didn’t really go as planned, as when I arrived I realised that this loan wasn’t the best thing for them nor for me, in terms of development. But I learned a lot nonetheless.

Okay, so I guess that during your five years in England, you were lucky enough to experience, if I may put it that way, “real English football…” I mean, the one from lower divisions. Is it really different from the image we have of the Premier League?

I think that in terms of intensity, atmosphere and impact, this is English football in its purest way. It’s a very intense type of football. I mean, you have to run back and forth all the time, it requires a lot of effort and energy. But that’s what the fans like, it’s good for the show I guess.

During you time in England, and at Wolves especially, you rubbed shoulders with one of the most highly-rated coaches in the Premier League: Nuno Espirito Santo. Could you tell us a bit more about him and his management style?

He’s a manager with an incredible sense of tactical nuance. I mean, just have a look at Wolves this season… they are a team that is very strong tactically, they do not concede a lot of goals and are always very well organised. Another thing that Nuno managed to implement in the team is the fighting spirit. The players will never give up and will fight until the end. I mean, they regularly grab good results in the last moments and it shows what Nuno does for this team. He created warriors ready to give everything on the pitch. But he’s made it possible because he does a lot for the group and he manages to do this all whilst staying very human and close to his players.

So that’s what really impressed you with him? His sense of tactical nuance?

Yes, definitely. He is a real tactician capable of finding a solution to every problem he encounters. And he goes through a long process of creating bonds between the players to bring about a good chemistry that makes Wolves a very disciplined team.

And when you were at Wolves, you played and trained alongside players that are now shining in the Premier League.

Well, yes indeed, I met a lot of them… I was training with players like Willy Boly, Romain Saïss, Diogo Jota or Ruben Neves every day. They’re all good people and I obviously hanged out more with the French-speaking ones (Boly, Saïss), but overall they have a great group of players that has been together for a long time and went through a lot together. That really shaped them into the team they are now.

You mentioned Ruben Neves… One of Wolves’ star players. Was he as impressive back then when you met him as he is now? Because his journey is quite incredible: he had Europe at his feet but chose to sign for a Championship side. He received a lot of criticism for it at the time but has stopped tongues wagging now…

Yeah, that’s true. I mean he is a very, very talented player. We immediately saw it. From his very first minutes in the Championship, he blew everybody’s mind with the science behind his ball placement and his aesthetically pleasing way of playing. But especially, we were astounded by his passing skills and his great shot capacity from long range. But it should be said that his success was also made possible by the team he plays in and the teammates he plays with. There are other very gifted guys at Wolves that convert his passes and allow him to fully express himself on the pitch.

Do you still have some kind of affinity for Wolverhampton? Even if you don’t play for them anymore?

Of course. Wolves will always have a special place in my heart. It’s like… my first club in England and the one that made me a professional footballer. I mean, I have been a Wolverhampton player for five seasons and that’s not nothing to me. I’ll always be grateful for what they’ve done for me.

So, let’s now have some words on your club in Romania, FC Arges. How was your arrival, how have you adapted? Because it is always difficult to settle in a new country with a new culture and a new language…

Everything went perfectly well. To be fair, I had just spent several months without playing, for different reasons, and as I arrived here, I immediately felt the coach’s confidence. He wanted to make me play a lot. And I remember, it was during the January preparation camp in Turkey after the winter break, I did several good games that allowed me to become a starter for the first team. Of course, the global pandemic stopped my progression, but overall, I’m happy and everything went really well.

And for you, was it a difficult choice to leave England, a country in which you remained for quite a while? Or did you feel it was the right time to move?

I genuinely think it was the right time for me to start playing regularly every weekend. Even though I’m still young, I think that there is a moment where you need to play in order to gain experience. Being in a big club is good, but without playing time it can be detrimental, because what matters is what happens on the pitch. And I knew that, coming to Romania, I would find regular game time and the pleasure I had lost in the previous months. So, obviously, it was not the easiest decision to make but I’ve never doubted it, I have never stopped believing in myself and my qualities.

In terms of the football, facilities, fans, atmosphere… Were you pleasantly surprised by what you found in the Romanian second division?

Indeed, to be completely fair with you, I had no idea of what I was going to find there. I didn’t know anything about the Romanian second division… But I did my research before joining FC Arges and I realised that the facilities were pretty decent. For example, the first game I played for my new club was in a stadium with a capacity of thirty or forty thousand people… There was a lot of people in the stands and the game was broadcasted… So yeah, it was a really nice surprise.

It’s common knowledge that Eastern European countries tend to produce incredible footballing atmospheres. So is it the case here as well, even in the second division?

Yeah, the atmosphere is great, the fans are present… They make noise and we can feel their support in every game, even away so… yes, that’s very pleasant.

And, how do you feel in the dressing room? Because I guess that foreigners are few and far between…

Well, my adaptation went well because, among other things, there is another French player in the team. His name is Kevin Moihedja (Le Mans-born defender who is a Comoros international) and he played a big part in me successfully settling. He introduced me to my teammates and put me in the best conditions right away.

Do you manage to communicate with them?

Yes exactly, most of them can speak English so it makes things easier… English is like my first language as I live a while there for a while. For years I have spoken more in English than in French.

So, let’s return to football. When the league was stopped, you were 4th in the league and only one point away from the second. Do you think, if the league is ever to start again, that you would have a chance of clinching promotion?

Yes, I’m pretty sure that we have a good chance of being promoted. The team was strongly strengthened this winter and so I think that we’re a strong candidate for promotion.

So this season was quite strange for you obviously. But how would you rate your own performances so far?

Well… the virus outbreak cut the season short and made it quite unique. But I’m quite satisfied because the most important thing for me was to be on the pitch again and enjoying myself. So I’m confident for the future, I have always been and I am even more so now that I’ve found some game time again.

Did you return to France or are you still in Romania right now?

Well, I’m still in Romania right now, waiting to see how things will shape up in the coming weeks. Like any other professional footballer, I’m patiently waiting for some news regarding the pursuit of the league.

So are you in permanent contact with your club?

Yes, of course. I’m in regular contact with the technical staff. They are following us closely and we have “homework” to do. I mean we have to remain fit and keep on training from home. And then we send them the results from our training. So, yes, we have to be ready in case of a potential resumption.

Are you planning on establishing yourself in Romania and maybe play in the first division?

For me, the most important is to be on the field again and rediscover that enjoyment that I had lost in the past months. But, no. I don’t plan on remaining in Romania for too long… The main reason I came here was to play regularly again. But also rediscover my true level, which corresponds with better leagues… For example in Spain, England, Germany or even France.

And if there was ever a country you’d like to play in again, which one would it be?

I’d like to play in England again. Leaving England doesn’t mean I don’t want to come back one day… Playing there again is one of my goals, in truth. But I’m not obsessed with it. I’ll see how things go. But this country will always be special to me of course.

To wrap up this interview, I wanted to know which of the many clubs in England you’ve played against left the biggest impression on you?

I think no other club left a mark on me as big as Wolves did. Wolves are a team I’ve always carried in my heart and I owe them a lot. Obviously I learned a lot in the different clubs I’ve been to but Wolves are the only to have left a big mark on me.