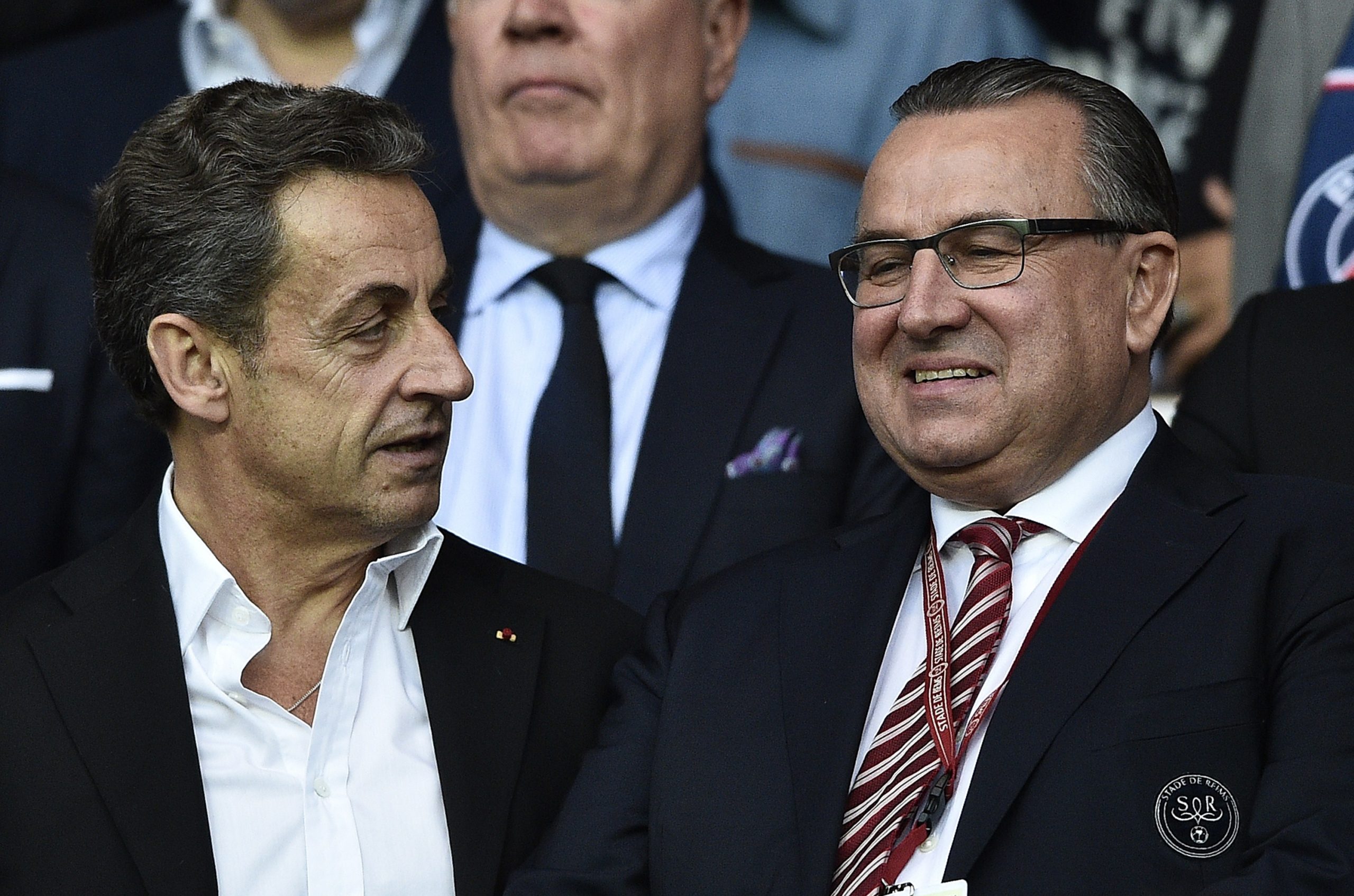 Currently sat in 5th position in the French Ligue 1 table, Stade de Reims are enjoying one of their best seasons in recent memory. With Europa League qualification potentially on the horizon come the end of the season, the club is on track for a return to their former glory days of the 1950’s. Few people though fully understand the recent history of ‘Les rouges et blancs’ and the club’s renaissance since their liquidation in 1991.

We start from the darkest days in Stade de Reims’ recent history and with the club’s liquidation of 1991. Despite surprisingly reaching the semi-finals of the Coupe de France in both 1987 and 1988, Reims had sat outside the top flight of French football since 1979, which had taken a massive toll on the club’s financial situation. In order to alleviate some of the club’s massive debt a new owner was sought, but no suitable party emerged and in due course Reims were relegated to Division 3. All aspects of the club were auctioned off, including former trophies, with the club reborn in 1992 as “Stade de Reims Champagne.”

Despite the club’s name and its history within French football, including winning six French Ligue 1 titles between 1948 and 1962 and twice finishing runners-up in the European Cup, Reims struggled in the lower leagues until the turn of the millennium. 1999 proved to be the first of many major breakthroughs as the club tried to bounce back from its previous liquidation. The club changed its name back to Stade de Reims and after three tough years turned professional again with promotion back to Ligue 2 in 2002.

The stay was short lived at first, with immediate relegation back to the third tier of French football, but Reims were able to bounce back in 2004 and enjoyed five solid seasons in Ligue 2. Despite a further relegation during the 2008/09 season, Reims ended their 33 year wait for a return to the top tier of French competition in 2012 when the team finished runners-up to Ligue 2 champions Bastia.

This is when the club embarked on a different route in an effort to become much more sustainable in the future. A new club philosophy and transfer policy was born and has since led to the club’s dramatic rise to fifth place in the current French Ligue 1 standings.

The philosophy for present day Stade de Reims is simple and one that is adopted by other ‘smaller’ clubs worldwide.

The transfer policy requires mass investment in youth with a view to sell on the same players for a sizeable profit in the future. The system has already proved very profitable for the French Ligue 1 side and there are plenty more opportunities to do so to come in the future with the club possessing some fantastic young talent, some now main fixtures in the club’s first team squad under David Guion.

Stade de Reims’ scouting network is extensive and far-reaching, it often looks where other French clubs do not. In recent seasons, players have been brought in from arguably more obscure leagues where transfer fees are usually lower, maximising profit in the long-haul for the club.

This system has seen Predrag Rajkovic join from the Israeli Premier League, Dario Maresic from the Austrian Bundesliga, Dereck Kutesa from the Swiss Super League and Marshall Munetsi from the Orlando Pirates in South Africa just this summer. Add to that the impressive captures of Arber Zeneli and Kaj Sierhuis from the Netherlands, and the scouting network is proving its worth in gold currently for Reims.

Since January, the club has looked to further add to this impressive haul. Reims have either made offers or being heavily linked with Alexis Saelemaekers, 20, from Anderlecht, Azor Matusiwa, 21, from FC Groningen and Jonathan David, 20, from Gent. The next generation of Reims transfer targets and potential signings looks exciting and well-planned out by its hierarchy.

The outcome at present is clear for all to see on the pitch. Reims currently sit 5th in the French Ligue 1 table and are on the cusp of European qualification depending on what happens with the rest of this season. ‘Les rouges et blancs’ also reached the French Coupe de la ligue semi-final this campaign, before being knocked out by PSG.

Off the pitch, the situation is additionally very healthy. During the January transfer window forward Remi Oudin, a product of Reims’ academy, was sold for a club record £9m, whilst recent arrival Bjorn Engels was sold to English side Aston Villa for £7.2m. Add to this the sales of Édouard Mendy and Jordan Siebatcheu to Stade Rennais amongst others and Reims have made just over £30m over the last two seasons. In fact since the 2014/15 season, the club has made just under £50m in player sales, an immense figure considering the side’s recent financial plight.

The next chapter of the club’s history is now in progress due to this financial boost, with the plethora of new signings that have been made over the past two summers. As mentioned before, not only do these players add real quality to the side currently but the transfers are designed to potentially make another tidy profit for the club in the future.

This past summer the club has laid out close to £16 million in transfer fees in order to push on in Ligue 1. Goalkeeper Rajkovic, 23, has become the club’s record transfer, costing £4.5m from Maccabi Tel Avi, but is already being touted with a future big money move after an impressive start to life at the Stade Auguste-Delaune. Nice are said to be extremely interested in a deal during the next transfer window.

Dario Maresic, 19, who has an extremely bright future and is considered one of the best young defenders in central Europe, was brought in from Strum Graz in Austria for just under £3m. It is likely that Maresic will become Yunis Abdelhamid’s long term replacement for Reims if they can keep hold of the Austrian U21 international.

In previous seasons the club’s recruitment has further picked up some fantastic coups across France too. Axel Disasi, who is now being courted by Premier League side Arsenal with a fee rumoured to be around £15 million, was picked up from Paris FC on a free transfer. Since then, his development under Guion’s tutelage has been dramatic and has seen Reims’ defence become the hardest to break down this season, conceding just 21 goals in 28 matches in Ligue 1.

There are other success stories too in the making. Striker Boulaye Dia was brought to Reims in 2018 for a small fee after an impressive spell with lower league side Jura Sud and has since flourished in Ligue 1 scoring 7 times in 24 appearances this term in all competitions. The striker is now being looked at by Marseille and mid-table sides from England and Germany. Mathieu Cafaro was picked up on a free transfer after being sacked by fellow Ligue 1 outfit Toulouse for a misdemeanour. Since then, the midfielder has scored 11 times and assisted on 6 occasions for Reims in 54 matches and has largely become a mainstay in David Guion’s match day squads over the past two seasons.

Stade de Reims’ own academy and recruitment program is still going strong too. As mentioned before, Rémi Oudin was brought through the ranks and sold for big money this season whilst winger Nathanael Mbuku could be Reims’ next starlet. The 18-year-old is considered as one of France’s brightest young talents and had an exceptional showing during last year’s U-17 World Cup where he finished second top scorer in the competition.

The list of young talent at the club over the last three seasons is endless and it looks incredibly likely that in the near future the outfit will reap an impressive reward for their hard work in terms of incoming transfer fees and/or on-field success.

What does the future hold

Taking everything above into consideration; the future looks extremely bright for Stade de Reims.

Not only are the results positive on the field but there is a genuine feeling and belief around the Stade Auguste-Delaune that over the next few years Stade de Reims can really cement their place amongst the French elite again.

With impressive wins over Marseille, Lyon and PSG over the past two seasons, it is not entirely ridiculous to say Reims are close to cracking into the top four of French Ligue 1 in the near future and into the European qualification spots in the French league standings.

Off the pitch there is a solid foundation in place that will lift the club to future success in one way or another. There is an excess of very gifted, young talent that if the club cultivates in the correct manner will drive on Reims’ success in years to come. With the set up currently in place at Stade Auguste-Delaune and with a scouting network as impressive as theirs, it really feels like the sky could be the limit for Stade de Reims in the not too distant future.

For a tactical deep-dive into how David Guion is achieving Reims’ on pitch success, click here.

Mohamed Bouhafsi reveals he was a victim of domestic violence as a child, in bid to support those suffering the same plight in quarantine