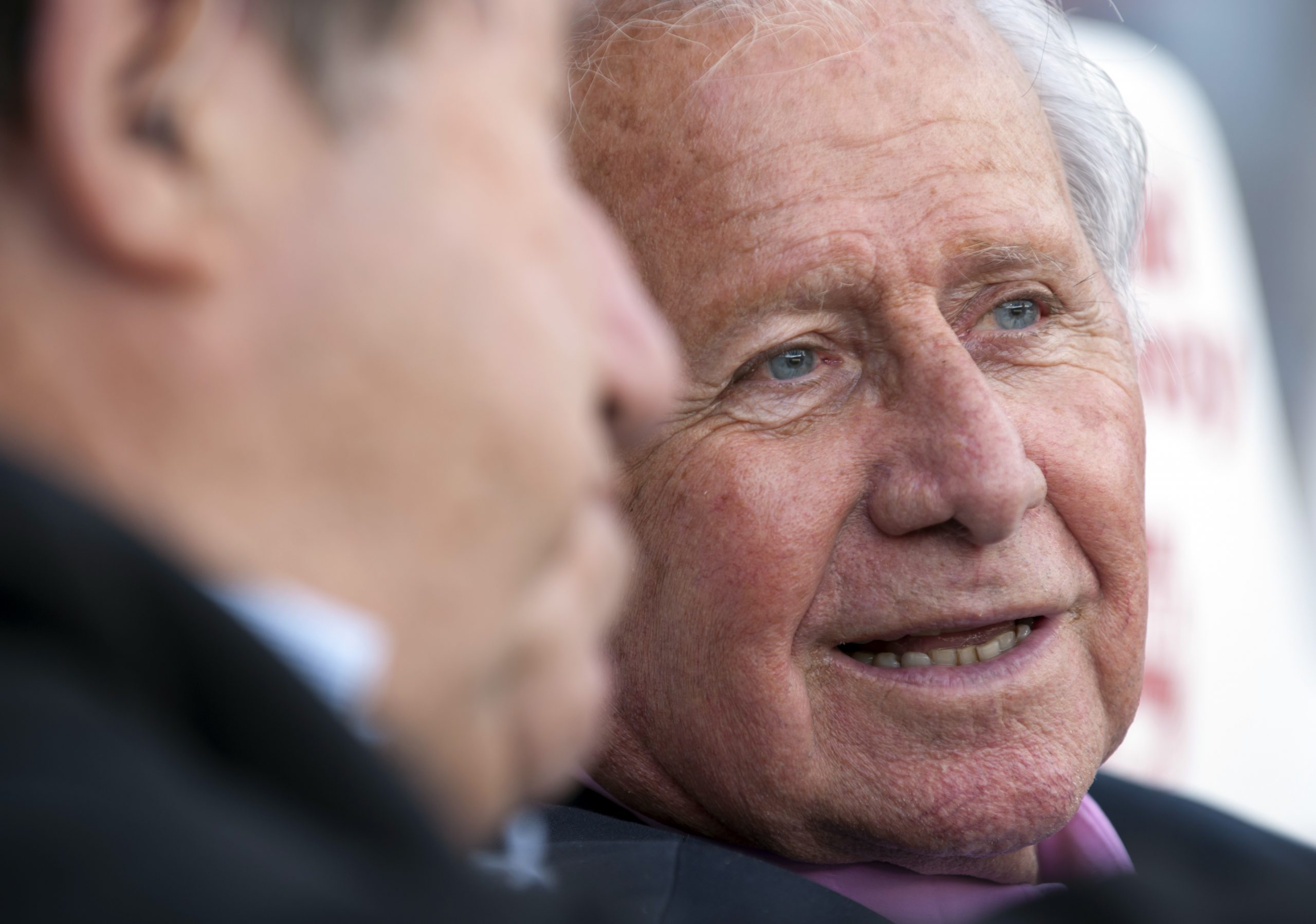 Last week, in the absence of live sport to show or talk about, L’Équipe TV repeated broadcasts of some of France’s great matches of the past, including the epic 1982 World Cup semi-final vs West Germany in Seville and the Euro 1984 final vs Spain in Paris. It was tragically fitting that the week-long highlights reel was bookended by the 87th birthday, then the sad death, of France’s coach for both those momentous matches, Michel Hidalgo.

The outpouring of love for Hidalgo in the past few days is a testament to the high esteem in which he is held by the French public, not only for his human qualities, but also for being the man who turned France into winners.

Although he won only one France cap as a player, Hidalgo had a distinguished professional career, winning three French league titles: two with Monaco and one with Reims – the latter for whom he also scored to give the team a 3-2 lead before they went down 4-3 to Real Madrid in the first European Cup final.

Following his retirement, Hidalgo became very active, along with his great friend Raymond Kopa, in the newly-formed UNFP (the French players’ union) and was influential in replacing contracts for life with fixed-term contracts, giving players more freedom. He then moved on to develop his coaching credentials within the FFF set-up. Under the tutelage of administrators Georges Boulogne and Fernand Sastre, he worked his way up to become assistant to France coach Stefan Kovacs and eventually replaced him as head coach in 1975.

At that time, France was barely on the map as a footballing nation. Saint-Étienne were about to reach the European Cup final (to be cruelly denied by Hampden’s square goalposts). And 17 years earlier, France had reached the World Cup semi-final. But these were oases in a desert of mediocrity: les Bleus had not even reached a World Cup finals since 1966 and were, as Hidalgo acknowledged, “a small footballing nation”.

Hidalgo began his reign in March 1976 with a 2-2 draw against Czechoslovakia – a match in which he gave debuts to Maxime Bossis, Didier Six and, most notably, Michel Platini.

With a team blending experience and young talent, Hidalgo led the side to qualification for the 1978 World Cup in Argentina, the beginning of a sea change for les Bleus. Perhaps the away qualifier in Bulgaria gave an indication of France’s standing at the time, the team small enough to be on the wrong end of some atrocious refereeing from Scotsman Ian Foote (prompting Thierry Roland’s famous commentary: “Monsieur Foote – you are a bastard”); France escaped with a 2-2 draw and defender Marius Trésor, years later, remembered that in those days the team was more than happy to come back from eastern Europe with a point.

Despite an amateurish administrative error which saw France having to take to the field in the local club’s kit vs Hungary, France gave a reasonable account of themselves in Argentina. But then failed to qualify for Euro 1980 and were struggling in qualifying for the 1982 World Cup – so much so that, in the run-up to a crucial home match vs the Netherlands, Hidalgo had a 3% approval rating among fans. Nevertheless, he sprung a huge tactical surprise by fielding six attacking players in a 4-3-3 – with a midfield made up of three No.10s – Platini, Alain Giresse and Bernard Genghini. An inspired France won 2-0, the first goal a trademark free-kick from Platini, who later said that this was France’s most important match ever, as without that win, nothing that followed would have happened.

Les Bleus recovered from a slow start in Spain, including an opening defeat to England, to reach the semi-finals and the legendary 3-3 draw and penalty shoot-out defeat to West Germany, most famous for Harald Schumacher’s assault of Patrick Battiston and France’s squandering of a 3-1 lead in extra time.

Despite the trophy wins that have followed, a large number of French fans of a certain age would still pick this as their marquee France match. No doubt in part for the rollercoaster of emotions. But perhaps also because it marked the exact point at which les Bleus – arguably all of French sport – determined to shed its romantic notion of Raymond Poulidor-style plucky losers. The players came out of the match with increased belief, a taste of the pain of defeat at the highest level and a determination not to experience that again. Hidalgo later commented: “after Seville, the whole country had that rage, it was the feeling of injustice that drove us on for two years. Even now, people talk to me more about that match than about the Euro and the final in Paris.”

Sure enough, led by an inspired Platini who, with nine goals in five games – including two perfect hat-tricks – dominated a tournament like no player before or since, les Bleus won Euro 84 at home. A first international tournament win not only for the football team but for any French professional sports team, this set the platform for the success that has followed over the past 26 years, from the 1984 Olympic tournament win later that summer to 1998, 2000 and 2018, as well as numerous victories in other team sports.

The two Michels will inevitably always be linked – and owe each other so much – but arguably Platini’s footballing genius and leadership skills have done Hidalgo a disservice: many have downplayed Hidalgo’s influence, suggesting that he simply benefited from a talented generation and a gifted playmaker. However, while no one questions what a great man manager he was, his tactical calls should also not be dismissed. He showed his tactical nous – and his couilles – with that Netherlands call. He innovated again against Northern Ireland in the 1982 World Cup, fielding a midfield four featuring his three number 10s, plus Jean Tigana, and giving birth to the famous Carré Magique.

As Luis Fernandez developed between 1982 and 1984, Hidalgo adapted again, effectively turning the Carré from a diamond to a square as Fernandez replaced Genghini, providing more defensive cover and freeing Platini to push further forward. He surprised again in the 1984 group stage match against Belgium, fielding a five-point Carré Magique as Genghini came back in and Fernandez started at right-back. France won 5-0 in arguably their most complete performance.

At the centre of all Hidalgo’s tinkering was an obsession with le beau jeu. Having played for the great footballing sides of Reims under Albert Batteux and Monaco under Lucien Leduc, attacking football, played in the right spirit, was the uppermost concern for Hidalgo – arguably more so than winning. As Bruno Bellone observed of that squandered 3-1 lead vs West Germany in 1982: “maybe we didn’t calculate enough. Michel was a poetic person. For him it was about the game, about pleasure. We took so much pleasure that it no doubt cost us the match against West Germany. We could have played it like the Italians and got to the final, but…”

Hidalgo stuck to his guns, though, and reflected after the Euro 84 win: “I never spoke to my players about the result. Never! I always told them to think about the game, and the results would look after themselves. As a player, a coach and a fan I always felt this way. I don’t care if I come across as a poet or as old-fashioned.”

Hidalgo was intent on creating a French style: “To coach France, you have to be in love with les Bleus, you have to want offensive football, to show the beauty of it to the whole world. We’re representing the country.” Hidalgo succeeded in his intentions, as his team became known as the Brazilians of Europe.

And it is something that subsequent France teams and coaches have struggled to emulate. Of the team that failed to qualify for the 1994 World Cup, Hidalgo observed that “the team is missing what we love: panache and brio. Are they now taboo? I dream of a football of smiles. Smiles and creativity. Beauty is compatible with efficiency. I know it’s silly, but I am sure of it.”

It is certainly hard to think of a France coach since Hidalgo who has imposed such a distinctive style. Arguably Aimé Jacquet and Didier Deschamps have come closest with more defensive strategies – with obvious great reward but arguably without winning the same public adoration as Hidalgo’s team. As Hidalgo said at the time of France’s 1998 World Cup win, “today one plays with three 6s and a 10. I played with three 10s and a 6.”

Indeed, Platini was correct to say that Hidalgo was “more a creator of emotions than a tactician,” and this extended beyond the style of football that he espoused. Known for his soft nature and his love of his players, many are the examples of Hidalgo’s sensitive side and strong moral compass.

On the eve of the match against Argentina in 1978 Hidalgo broke down in tears during a radio interview when talking about the criticism that he and his team had received: “I’m always told that I’m an idealist. I will remain so but will look at the world differently now. Since when should kindness and goodness be seen as a weakness?” Four years later he struggled to hold back the tears as he consoled his bereft players in the Seville changing room. Earlier that same tournament he threw a rare temper-tantrum as he raged at the injustice of the head of Kuwait’s FA entering the pitch to persuade the referee to disallow a France goal.

Perhaps the two best examples of Hidalgo the man – and the values with which he imbued his players – came at the end of Euro 1984. First, with 15 minutes of the final against Spain remaining, defender Battiston asked to be substituted, Manuel Amoros replacing him. Taking his seat on the bench, Battiston was asked by Hidalgo if he was injured. He replied that he was not – but that he wanted Amoros – suspended for most of the tournament – to be able to play his part in the final (Hidalgo, in referring back to the incident, called Battiston a lord).

The second example came with Hidalgo’s resignation following the tournament – making good on a promise that he had made two years earlier to his successor Henri Michel. Hidalgo always regretted that he did not stay on, but was a man of his word. He similarly came to regret not taking up Real Madrid’s offer of the head coach role that summer.

Instead he took up the role of Directeur Technique National and turned down an offer to become French Minister for Sport, before taking on a managerial position at Bernard Tapie’s upwardly-mobile Marseille, during which time he came very close to signing Maradona.

He remained in Marseille for the rest of his life, forming such a bond with the city, the club and the fans that he will this week be buried in Marseille colours.

Although his health had deteriorated in recent years, he was well enough to attend a reunion with several members of the great 1982-1984 team earlier this year. Hidalgo in his element, surrounded by the players he loved. The players taking the final opportunity to thank him for making them – and their nation – great.

Dr Alex George on how to retool workouts without access to the gym: “Make the most of your home environment.”