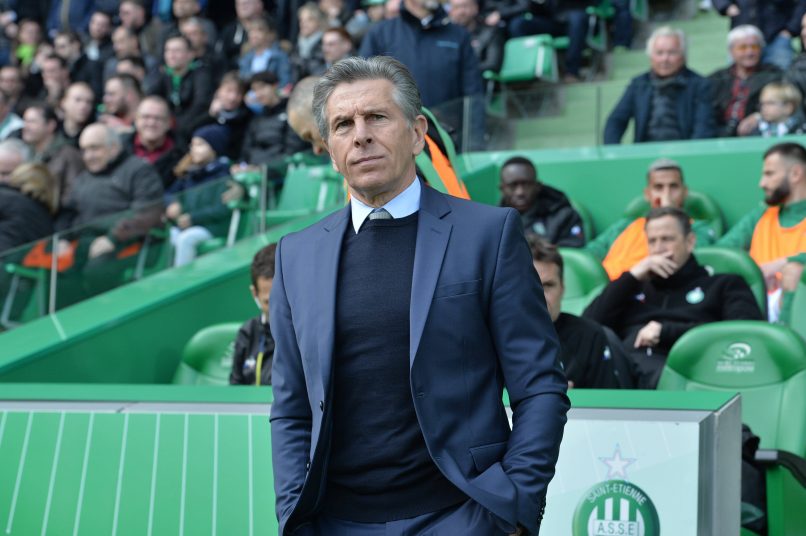 In a league where off-field innovation has become the norm, St Étienne have grown alarmingly stale. In stark comparison with the nuanced scouting, the hoovering up of young talents and the deference afforded young players by many other clubs, Les Verts’ heavy focus on established, ageing pros has begun to look backward. Revolution has long been needed.

The club hopes that Claude Puel will lead that change and the power entrusted to Puel since his October appointment, akin to that of an early 2000’s, “English-style” manager, is unprecedented for Les Verts, and more than unusual in a wider context. However, remoulding a club so fiercely entrenched will be a delicate undertaking.

The Puel revolution was swift. Unusually for a manager, upon signing Puel, he was added to Les Verts’ executive board alongside co-presidents Bernard Caïazzo and Roland Romeyer. As was, at Puel’s behest, new general manager Xavier Thuilot. Having worked together at Lille in the noughties, Puel conceded that Thuilot “was on the list of possibilities [for the role] and it is true that my arrival accelerated his.”

Meanwhile, although the club are still looking to add a sporting director, another Lille alumni in Jean-Luc Buisine became the Thuilot/Puel approved appointment as Head of Recruitment this week, adding another potential Puel ally and underlining his oversight on restructuring.

Across six months at Le Chaudron, Puel has begun to aggressively reshape every aspect of a club the new coach calls “an institution.” One he has followed since childhood after, as Puel told L’Équipe, his attention switched to football and Robert Herbin’s seventies St Étienne team when his mother told a nine-year-old Puel he would not be allowed to injure himself playing rugby, as his father had done. Senior players have been marginalised, disruptive influences have been sidelined and Les Verts’ recruitment philosophy has been overhauled.

“Everyone is involved,” midfielder Ryad Boudebouz told RMC, “The coach has given a lot of players a chance, brought back competition… When everyone feels involved and nobody feels like their position is safe, it changes a lot of things.” As such, ageing captain and club legend Loïc Perrin has been rested more liberally with exciting teenage defensive pair William Saliba and Wesley Fofana growing in stature, while fellow experienced pros such as Mathieu Debuchy, Yann M’Vila and Stéphane Ruffier are no longer guaranteed a place in the side.

Although arguably necessary, Puel’s sweeping changes have proved disruptive. After a poor season by his usually high standards, Ruffier was unceremoniously dropped (having previously only missed out when injured or suspended) for the trip to Reims in February. Infuriated, Ruffier supposedly stormed out of the training ground in protest after a meeting that “lasted thirty seconds” according to his agent Patrick Glanz.

Glanz meanwhile insisted to L’Équipe that Ruffier had been contradictorily informed by Puel he would be key during his reign. “Since he arrived in St Étienne the coach has established a dictatorial power struggle with all the components of the club,” Glanz raged. “Here, he spits on a legend of St Étienne, adored by the public and his previous coaches.” L’Équipe reported last week that Puel has already called Ruffier to inform him perennial understudy Jessy Moulin will be his number one next season.

Speaking on Instagram Live, M’Vila too was less than enthused with Puel. “He is a good coach… maybe without good manners,” M’Vila described. “He wants everyone to do it his way. He is not close to the players like we have previously experienced.” Centre-back Timothée Kolodziejczak meanwhile was also swiftly exiled from the squad having bulked at the idea of playing at left-back. Romeyer too has shown resistance towards Puel’s swift overhaul, particularly – L’Équipe reported – in Thuilot’s promotion to the board. The sports daily also detailed a meeting at the start of March in which Puel insisted that the day-to-day running of the club be left to him and Thuilot as initially agreed, or he would resign.

As M’Vila suggests, a lack of charm is again an issue for Puel. Although a more animated touchline presence in Ligue 1, Puel’s aloof demeanour was long criticised during his spell in England with Southampton and Leicester City. While French coaches are typically less effusive, fostering belief in his ideas and building relationships is again proving tricky for Puel. “You can walk alongside him without him talking to you. Saying nothing…” explained M’vila.

Unsettling those around him is nothing new in Puel’s career. Criticism from Jamie Vardy after leaving Leicester and long term Lyon director Bernard Lacombe describing Puel as “not his cup of tea” being just two examples. While his ideas may have value, the proof that Puel is capable of the long-term managerial juggling act that would be needed as disruptor-in-chief to drag ASSE into the modern era, is thin at best.

Indeed, evidence to the contrary is concerning for ASSE fans. After seven consecutive league titles between 2002 and 2008, under four different coaches, Puel told local paper Le Progrès “we have to change everything at Lyon,” having just been appointed OL boss with the remit of European progression. Lyon lost their title and only made the 2009/10 Champions’ League semi finals after beating another French side (Bordeaux) in the quarters.

As L’Équipe note, upon joining Leicester, Puel insisted the Foxes title winning team’s direct style had been rumbled and “it was therefore necessary to set up a team capable of playing with a more static attack,” Puel told the Daily Mail “and only five players from the squad could adjust to it.” Dour football and fan frustration followed. The improvement under Brendan Rodgers since (albeit helped in league position by Manchester United, Arsenal, Chelsea and Spurs’ transition periods) showed more was possible.

Results and style are again becoming an issue for Puel at Le Chaudron. Solid form which brought no defeats in his first nine games across all competitions disintegrated in December to ten losses in 14 league games since. Despite ousting Rennes and Monaco in making the Coupe de France final, St Étienne are an excruciating watch. Despite the potential of last season’s top scorer Wahbi Khazri, Ryad Boudebouz – who was outstanding with Montpellier before leaving for Spain – and Romain Hamouma, only Denis Bouanga – on whom Puel heavily relies – has impressed consistently.

Although injuries have been troublesome, with Yohan Cabaye and M’Vila included in a technically gifted support cast, there are few excuses for ASSE’s unimaginative and negative displays. “What I regret is that we have a f***ing good group,” underlined M’Vila, “but there is something that isn’t working. Last year, the group was gelling well and we made it into the Europa League. How do I explain it? These are the coach’s decisions…”

Nevertheless, Puel is right in principle – change is desperately needed. Over eight years, Christophe Galtier’s incarnation became increasingly dull and pragmatic as the now Lille boss managed to squeeze results from an ever-thinning squad and decreasing resources. Unlike many Ligue 1 outfits who switched the focus to producing young players to maximise financial viability in the mould of Monaco or Nice, St Étienne have continued to rely on established, experienced figures. Headline signings in recent years have included Debuchy, M’Vila, Neven Subotic, Boudebouz and Cabaye, all in their late twenties or early thirties.

As financially one of the worst affected clubs during the ongoing COVID-19 crisis, Puel’s assertion that this policy is no longer feasible for Sainté is truer than ever. “I have no complaints because it [the model] made it possible to perform. St Étienne has held its position for the past few years,” Puel explained to L’Équipe. “Work has been done well, in the short term. Is this model viable? I don’t think it can develop the club. Rather than buying an established player, I would like to recruit, train and improve him.”

“In an economy that has changed,” Puel then told France Football, “no team is capable of retaining their squad’s backbone for two or three seasons, to keep their best players and to retain talents for a long time.” Instead, “Ligue 1 has become a laboratory, a youth academy for the four leagues that are better than we are.” As such, Puel stated from the outset that his “team that will stay under construction for quite a while.”

This team will take a different route to previous St Étienne sides and to the league in general. “Unlike other countries, we are lucky to be able to train different footballer profiles,” said Puel. “It’s not forbidden to have powerful and fast players, who push the ball and make individual differences. But if we worked more on technique, anticipation or reading the game, I’m sure we could get ahead of all the others.” He does however concede the obvious counter argument: that France are World Cup winners regardless of this supposed focus on physicality.

Now “transfers at €4m or €5m will no longer be possible,” as Puel stated last week, the club have started to sign promising players from further down the pyramid. Young right back Yvann Macon joined in January from third tier Dunkerque, Jean-Philippe Krasso of fourth division Epinal agreed a deal earlier this month, while St Étienne have also been linked with highly-rated PSG teenager Adil Aouchiche. A promising group of younger players including lanky striker Charles Abi (19), impressive centre-back Wesley Fofana (19), all-round midfielder Zaydou Youssouf (20) and holding player Mahdi Camara (21) have also had their contracts extended. Conversely, a decision on the ageing Perrin’s contract extension continues to be delayed.

Puel deserves credit for his bold attempts to remould a dangerously stagnant club, but convincing the board, players and fans to believe wholeheartedly in such drastic measures requires a leap of faith. Although 80% of fans in a RTL survey named factors other than the coach as the main culprit for poor results, belief is something the quiet, distant Puel is seemingly unable to engender on such a scale. Unrest above and below the manager, infamously volatile fans, disastrous results and any promised change (admittedly partly due to dwindling resources) being so distant, makes for an uncomfortable and fragile mix.

Fortunately for Les Verts, Puel’s ability as a coach in Ligue 1 remains a positive. The now 58-year-old recently took a struggling Nice (2012-16) into Europe after developing several younger players. However, he did so in a much more secure, financially stable and compliant environment and with the considerable help of revolutionary president Jean-Pierre Rivère and recruitment guru Julien Fournier. Even at Nice, a club carrying much less expectation than St Étienne, form often fluctuated. Although Sainté have regularly under-performed since their seventies golden age, an eleventh place finish in Puel’s third season (as with Nice) likely won’t be tolerated at present day Le Chaudron.

Although all connected with St Étienne will have to also significantly adjust their expectations whenever French football returns, Puel will still have to immediately improve upon this season’s near-disastrous seventeenth placed finish. Otherwise Puel’s assertion in France Football that “I know that the challenge and the requirement are enormous but I would like this team to play in the Champions’ League in five years, even if I am no longer here and I do not benefit,” may soon become oddly prophetic. Revolution may be the correct course of action for Les Verts but Puel has a lot to do to prove he is the right man to lead the charge.