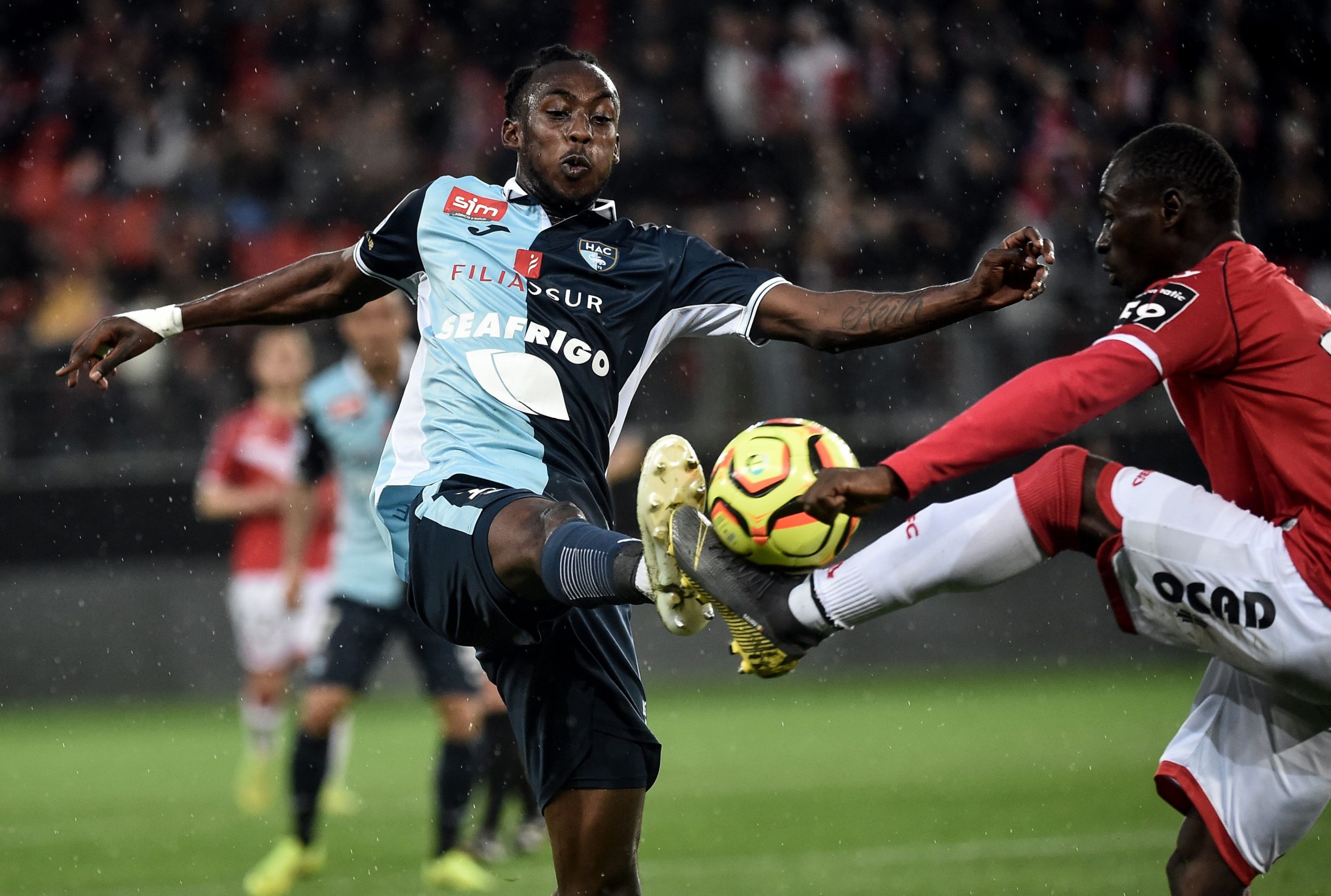 Ligue 2 is the land secrets. From an eclectic mix of African internationals, emerging teenagers, journeyman forwards, Ligue 1 loanees and semi-pro signings, some of Europe’s best talent can be mined. N’Golo Kanté and Riyad Mahrez are two famous examples, but the French second tier – despite being a slow and defensive division with 53, 0-0 draws last season – has acted as a big club supply chain for some years. Of Les Bleus’ 2018 World Cup winning squad, 10 had spent significant time in Ligue 2 or lower at the start of their careers. The eleven that follows encompasses some of the best burgeoning talent Europe’s most famed footballing backwater has to offer. Most, if not all, will already have caught the attention of some of the continents most illustrious clubs.

Nardi’s career so far has been a meandering one. Having joined Monaco in 2014 as a teenager and lauded by some as Monaco’s next great keeper, Croatian Danijel Subašić proved difficult to oust and Nardi was sent on a succession of loans. Having proven a solid understudy for Subašić in the 2015/16 campaign, a spell at Rennes saw just one outing – a 7-0 cup defeat to Monaco. After two impressive years with Cercle Brugge however, Nardi returned to France and Ligue 2 leaders Lorient. Clearly benefiting from the game time he received in Belgium, Nardi is now not just a sharp shot-stopper but commanding and calming too. Promoted or not, Nardi deserves to be in Ligue 1 next season.

Having left Lyon without making a senior appearance, and after a season with third division Bourg, Kalulu’s form this season has been revelatory – much like his team’s. Promotion contenders two years ago, Olivier Pantaloni’s charges were nearly relegated last term but, after a squad overhaul, automatic ascent to Ligue 1 is again their aim and Kalulu has been a prominent part of their latest rise. An intelligent, skilful and composed full-back, both defensively and when overlapping, the powerful defender is ready-made for Ligue 1.

Expectations were low when Boubacar Kouyate arrived from Sporting Lisbon’s B team last January but after a slow start, “Kiki” has become a new-look Troyes’ defensive titan as the Champagne club chase promotion under Laurent Batlles. Impressing as part of the three man defence that Rui Almedia introduced last season – nearly bringing promotion – Kouyate is broad, rangy and dominant in the air at both ends, becoming a leader in Batlles’ side. Six strikes, including a 30-yard blast at Guingamp, makes Kiki ESTAC’s lead scorer. Nottingham Forest are reportedly keen on the Mali international.

A slightly left-field addition to this eleven, but Bade’s effect on an ailing Le Havre defence has been stark. A graduate of Le Havre’s famed academy, Bade was parachuted into Paul Le Guen’s first eleven almost out of nowhere in January. Although he’s proved to be composed, defensively astute and technically gifted, after just seven league outings the 18-year-old’s career is little more than fledgling. Although there’s much growth to come, the possibility of a free transfer this summer will have piqued the interest of France’s biggest clubs.

Due to injuries last term, at the age of 23, this is Ivorian left-back Operi’s first consistent season at senior level. Like many emerging young players in France, the gung-ho Operi got his start in the sprawling fourth and fifth divisions, firstly with Caen’s B team then the reserves of his current club, the small Loire valley outfit Châteauroux. Explosive in attack, even contributing a couple of goals this term, Operi may suit a role further forward, although his coach Nicolas Usai continues to argue that Operi benefits from playing with the game ahead of him. Soon to be a free agent, St Étienne were linked as early as January and they won’t be the only Ligue 1 side looking to snap up one of the second tier’s best bosman options this summer.

Le Havre’s season has been an undulating affair. The ferocious start fueled by Tino Kadewere’s goals saw HAC top in September, but was followed by a run of nine winless games before five victories in their next seven. Strutting midfield general Pape Gueye’s form has been the only constant. Despite his youth, Gueye forcefully dictates play from deep and ably aids in protecting his back four while keenly marshalling those around him. Captaining the side on occasion, Gueye has quickly matured beyond his years and, like Bade, is unlikely to sign a new deal with Le Havre. Heading to Watford this summer, comparisons with Paul Pogba are not unjustified.

Despite only turning 20 in January, Doucouré has been a prominent part of Lens’ attempts to return to Ligue 1 since signing from Malian club Real Bamako ahead of the 2018/19 campaign, but his development has accelerated of late. Usually a dynamic, protective or water-carrying midfielder, Doucouré seamlessly dropped in as one of Philippe Montanier’s (before his February sacking) three centre backs, after making a strong Mali squad for last summer’s AFCON. Although his lack of first team outings in his natural positions this season is a concern, 57 senior games of such consistent quality is an impressive record at this stage.

The gliding, socks-rolled-down elegance of Enzo Le Fee equates to perhaps the most exciting talent in this eleven. Despite only making his first start on the final day of last season, Le Fee quickly forged a place in Christophe Pelissier’s strong Lorient side. Intelligent in possession, overtly technically blessed and boasting a wide range of passing, Le Fee is comfortable as the furthest forward midfielder or deeper in his team’s engine room. Having only turned 20 in February, his consistency needs improving as does his physicality but the way in which an on-song Le Fee floats around midfield draws parallels with some of France’s greatest creators. He could one day become their peer.

Initially thrown into the first team as Pablo Correa’s Nancy failed in their 2016/17 Ligue 1 survival bid, Bassi has assumed much creative responsibility in Lorraine after a string of superb individual strikes the following autumn. Although a little wasteful at times, Bassi’s elusive presence around the area – either as a number 10 or drifting in from the left, eye for goal and neat passing made the Frenchman a rare spark of quality as Nancy twice struggled against relegation. ASNL were fortunate to keep Bassi for another year after financial difficulties and the player attempting to force a move. They won’t be so lucky again.

Despite being one of the division’s bigger clubs, Alan Perrin’s Nancy were edging toward a seemingly inevitable relegation in January 2019 before Brazilian forward Vagner joined on loan from St Étienne. Although his inclusion in Les Verts’ first team was fleeting, he had quietly impressed before becoming collateral damage in a coaching reshuffle. Intense, direct, visibly hungry and ruthlessly skilful, it was Vagner’s string of gleefully dominant displays across four consecutive wins which ultimately kept Nancy in Ligue 2. Although a bad ankle injury in November halted his charge, the summer could be an interesting one for this under the radar talent.

Wayward, lethargic and lacking in confidence having joined injured from Sweden last season, the swaggering, clinical finisher Tino Kadewere is today was unimaginable. After 20 goals in 24 games, a move to Lyon awaits after OL paid €12m in January before loaning the Zimbabwean international back to promotion chasing Le Havre. If he can maintain his form whilst making the transition up a division, €12m could quickly become a bargain. Tellingly, a sumptuous back-heeled assist at Troyes shows Kadewere is more than simply a poacher.