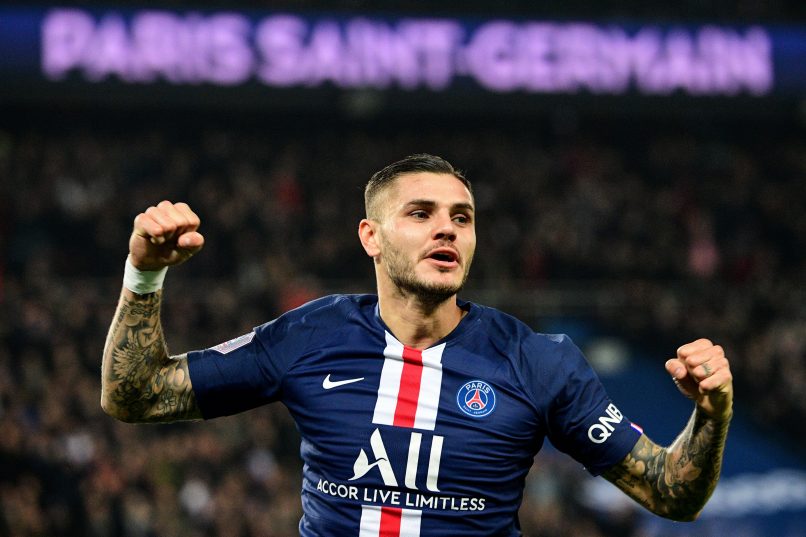 By the midway point of the now infamous 2019/20 Ligue 1 season, Mauro Icardi was in impeccable form. The Argentine was the spearhead of a star-studded three-pronged attack alongside Neymar and Kylian Mbappé and there seemed little doubt that Paris Saint-Germain would exercise their option to purchase the striker at the end of the loan period.

But after the turn of the year, the mood had changed; Icardi’s goals became less frequent and the 27-year-old was relegated to the bench in favour of fan-favourite Edinson Cavani, who himself had been left in the wilderness for the most-part by coach Thomas Tuchel.

It was a strange and almost inexplicable gear-shift; everything had been going so well for the man from Rosario, Argentina, who looked to have conjured up a great relationship with his strike partners on and off the pitch.

Icardi, who had a history of conflict and controversy with Inter Milan and a section of their ultras in the Curva Nord, seamlessly slotted into Tuchel’s set-up and left PSG fans wondering what all the negative fuss had been about.

There were many reasons cited for Icardi’s dip in goal-scoring form in 2020. Media reports rather lazily suggested that he had put on too much weight, more reputable French outlets claimed that he had a falling out with Tuchel.

Whilst both theories carry weight, those with a keen eye on the fortunes of Paris Saint-Germain will have noticed a change in the dynamic of PSG’s front three, coincidentally as the French champions edged closer to the business end of the domestic and European season.

In the three months between Icardi’s first goal in red and blue against Galatasaray in October and his hat-trick against St Étienne in early January, the Argentine amassed no fewer than a staggering 17 goals with 5 scored in the Champions’ League.

However, over the course of the following two months, Icardi converted only three more times.

With such an alarming disparity in goal return, what changed for the striker?

In short, it wasn’t so much what Icardi was doing differently, but more the change in his strike partners Neymar and Mbappé.

It is no secret that Mauro Icardi thrives off service in and around the 18-yard box. Outside of that key area, he has the proclivity to show one or two flashes of brilliance, particularly in the first phase of a counter-attack, but his best work is mainly done in front of goal.

The service from PSG’s star-duo to Icardi dried up and it was increasingly evident from game to game. Icardi’s movement and running off the ball was still flawless. His ability to find small pockets of space or to work between the two centre backs was still efficient. Frustration often showed in Icardi’s body language and it was hard not to feel sorry for him for the excellent work he did to create space for himself.

It was the aforementioned game against Claude Puel’s side in January when Icardi became frustrated with the pair, despite Icardi scoring that hat-trick. According to L’Équipe, Neymar and Mbappé completed over 30 passes that night between them, with neither giving any to the loanee.

Mbappé and Neymar, whilst both outstanding at times, began to form a partnership of their own, rarely opting to pass to Icardi the same way they did earlier in the season, instead, playing between themselves. Icardi was now being subjected to the same treatment Edinson Cavani received from the pair during the previous season.

Interestingly, Icardi’s three strikes between January and March were all scored when Neymar and Mbappé were not on the pitch together with him. In fact, Mbappé provided an assist for Icardi’s goal against Dijon in late February, a game during which Neymar was suspended.

Such had become the frustration with both his team-mates and his coach, it looked as though Icardi, via his wife and agent Wanda Nara, was preparing a move back to Série A. As the speculation intensified, Nara produced some cryptic posts on her Instagram page which created intrigue as to her husbands next move.

But with the financial impact of COVID-19 and Inter Milan’s need for the funds that Icardi’s sale would create, the Nerrazzuri accepted a cut price deal in May and PSG landed one of European football’s most gifted-finishers in the peak of his powers for a reported €50m + bonuses.

If PSG and Icardi can work together next season to recreate the form the Argentine showed in the early part of his loan, the French champions have a bargain on their hands. Should Mbappé and Neymar once again work in tandem with Icardi, then PSG will be far stronger for it.

Icardi does not represent a threat to either player in terms of status or popularity the same way that Cavani does in Paris, therefore, readjusting from an ego perspective need not be difficult.

With a distinct lack of good strikers on the market, PSG have now replaced the seemingly outgoing Edinson Cavani’s goals for less than what the Uruguayan cost the club in 2013. That can only constitute good business in the current climate.

In Icardi, PSG know they are not getting a player that will cover too much ground, he often has 20-25 touches per game. He will also not do the ‘dirty work’ Cavani is willing to do, but he will arguably provide an enhanced threat in front of goal and a more reliable level of finishing, particularly in big moments.

Some still harbour disdain towards Icardi for previous misdemeanours in his personal life, but there should be no doubting his ability.

It is now time for the Parc des Princes to embrace their new striker, the man to lead the line for the next four years, a period in which his strike partners may look for moves away from the club. Icardi’s two goals against fierce rivals Marseille in October was a good start to winning the hearts of the Parisian faithful, but he will need to build on that next season.

As a replacement for the club’s all-time leading goal scorer Edinson Cavani, Icardi has big boots to fill in more ways than one. But with the Uruguayan on borrowed time and the news last week that club captain Thiago Silva is to leave the club after an eight-year stint, fans of the Parisian club will be looking for a new hero they can take to their hearts.

Following the complicated way he left the San Siro after once being worshipped by the Interisti, it would be pleasing to see Icardi write a new chapter, this time into Parisian folklore.