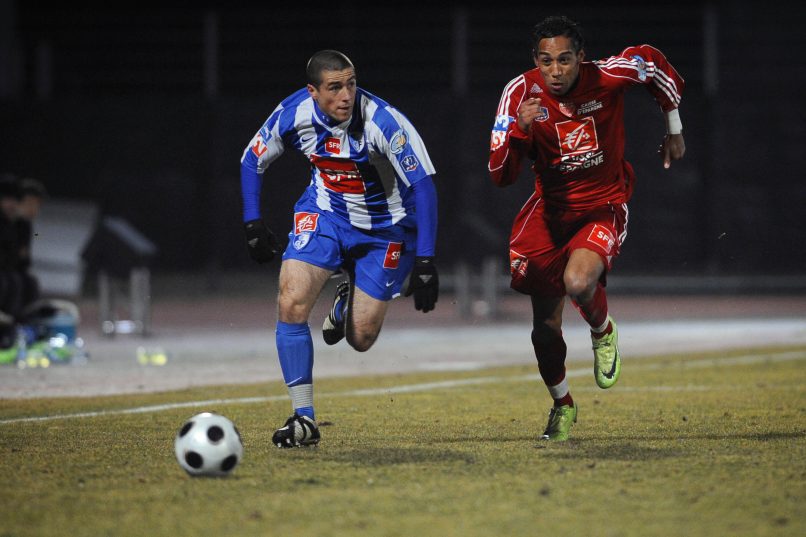 Football has witnessed the spectacular breakthrough of several prodigies in the past few years: Kylian Mbappé, Marcus Rashford, Jadon Sancho or, just a few months ago, Erling Braut Haaland, to quote just a smattering of the best examples. They went from zeroes to heroes in a matter of weeks, performed well very quickly on the big stage and almost made people forget that a more steady rise to stardom is an alternative way of success. Because yes, some do not breakout at the age of seventeen, do not win the league at the age of eighteen and do not win the World Cup at the age of nineteen. Some players just need more time to develop, and it doesn’t necessarily prevent them from reaching the footballing heights. Pierre-Emerick Aubameyang is one of them.

As recalled by France Football, the Gabonese striker had several loan experiences in France before finally showing all his incredible qualities at Saint-Étienne during the 2012-2013 season. One of them has been particularly forgotten: his spell at then Ligue 2 club Dijon in 2008-2009.

Aubameyang signed his first professional contract in Italy at AC Milan. Between 2007 and 2011, he didn’t play a single game with the Lombardy team and was loaned out to various French outfits. His first real professional experience was in Burgundy, after being spotted, as France Football reports, by French agent Yvan Le Mée. The latter, very impressed by the youngster’s qualities, sent a videotape to Bernard Gnecchi, DFCO’s chairman at the time, and told him to watch it. Gnecchi was convinced and signed the young Gabonese striker for a season-long loan.

The Gabonese’s pace and dribbling abilities were already blindingly obvious, as former teammate Antoine Goulard declares to France Football: “I remember this pre-season friendly against Grenoble. He dribbled past three two players so easily… that’s the moment we saw he had something more.”

Despite not playing a single minute as a professional in Italy, Aubameyang had still learned a few things at AC Milan, as Goulard highlights: “He was a technically gifted player, no doubt about it… But he also had this very “Italian” tactical discipline.”

This “tactical discipline”, honed on the other side of the Alps, really made the young player’s adaptation easier. Playing as a right winger, Aubameyang quickly became a key player and scored his first goal against Troyes (2-1) after only four games. “You had to catch him before he’d started running because matching his pace was just impossible,” says DFCO defender Jordan Lotiès, who played alongside the Gabonese, to France Football. “At the back, we could blindly clear the ball far upfront, we knew he would have it. That’s how quick he was.” In Burgundy, Aubameyang showed glimpses of what made him one of the best strikers in the world right now: astonishing pace, good dribbling and a great sense of anticipation. Even if he was a little bit shaky in front of goal, he still managed to net 8 goals in 37 games. “Some players make a bigger impression than others,” adds DFCO’s sales manager and former player Florent Perraud. “You didn’t need to be an expert to spot that he had something special.”

Another quite unknown part of his Dijon spell is the very interesting connection he established with the Uruguayan forward Sebastian Ribas (now aged 32 and playing for Rosario Central) who, just like Pierre-Emerick joined Burgundy in 2008 from Italy. The pair would together score an eye-catching 17 goals, Aubame netting eight of them. Sebastien Larcier, DFCO’s recently departed Head of Recruitment (now of Angers), remembers: “He arrived alongside Sebastian Ribas. Both were coming from Italy, Ribas from Inter Milan. They both had the same ambition and were very professional. They would never complain. That’s what really struck me.”

Aubameyang has always been a colourful character, very good at dancing and capable of wearing clothes no one would ever dare to try. In 2008, the young Laval-born striker already had a very sharp sense of fashion and impressed everyone at the club with his shiny shoes and his convoluted jackets. “He’s always had something with clothes. You know, Italy is a good land for fashion,” says Jordan Lotiès. “He wasn’t afraid of wearing strange gold hobnailed shoes,” adds Goulard.

Dancing was also a part of Aubameyang that blew his teammates away, as Larcier says to France Football: “He was an incredible dancer. My kids used to come to the training ground and Pierre-Emerick would show them his moves. He’s always had an off-the-wall sense of humour and smiles effortlessly.” That perpetual joy and his balanced temperament really helped him at Dijon, but also throughout his entire career. On the pitch or in the dressing room, he was never really caused any trouble and has always to leave a strong impression on the players, the fans and the managers who have rubbed shoulders with him.

A general consensus at Dijon is that, among the people who met him, nobody really expected “PEA” to become one of the most prolific and talented strikers of his generation. “We couldn’t know that he’d become of the best in the world,” says Perraud. Also, his style of play drastically changed following his season at DFCO. From a somewhat inefficient winger, he became a goal-machine in Germany and in England. He followed the Thierry Henry trajectory path of an attacker who began his career on the wing and ended up upfront.

Dijon was Aubameyang’s first experience at the professional level and was also the season where he made one of the most important choices of his career: play for his father’s nation Gabon. After this loan in Burgundy, Aubame would go on to experience several others, notably at Lille, Monaco and finally Saint-Étienne. Les Verts would eventually buy him and place their trust in him for good. In the former industrial city, Aubame really showed his full potential for the first time and his performances earned him a ticket to Borussia Dortmund. Not bad for a guy who described himself as “cack-footed”…