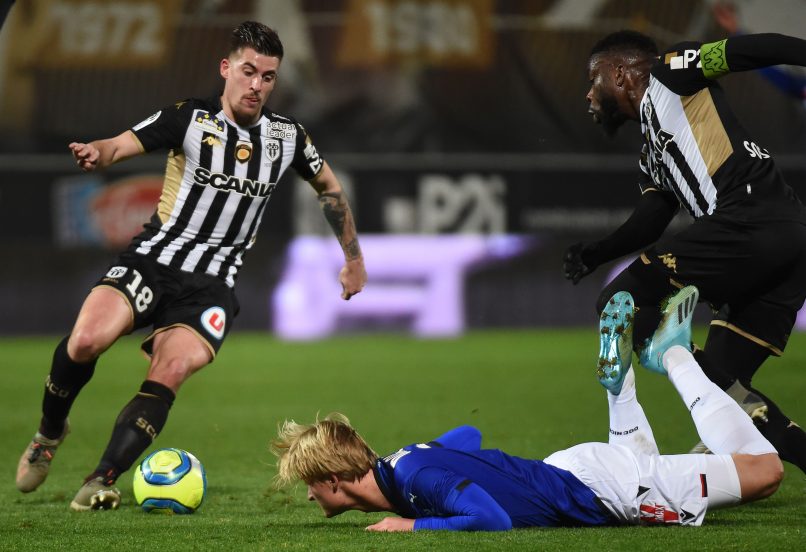 This article is taken from Get Football’s new European Football publication, The Modern Footballer. In one of ten player profiles, Thomas Wiseman looks at Baptiste Santamaria. The Angers man is quietly one of the best players in Ligue 1 and attracting Premier League interest. Print and digital copies available here: http://bit.ly/TMFIssue1

ANGERS are known as a club that, using their specialised and sophisticated scouting network, have an impressive record recruit talented players from French lower league clubs. These talents nestle under the wing of manager Stéphane Moulin whose experience in developing young players is similarly highly regarded. The club has a profile based on continuity in almost every aspect from coach Moulin, a former player, who has been back at the club since 2005 and the first team coach since 2011, to General Manager, Olivier Pickeu, also at the helm since 2005, and his brother, Benoît, serving as fitness coach for almost as long.

This continuity trope permeates into the squad as well. The current starting defence and goalkeeper has cost the club a grand total of zero in transfer fees and all, apart from 18-year-old academy grad Rayan Aït Nouri, started in the 2-0 victory in round one of the 2015/16 season, the club’s first game back in France’s top flight for two decades. This is a rare achievement in modern football but cannot be sustained forever. While Moulin’s tactics and setup can mask some of the individual deficiencies of the defenders, Baptiste Santamaria is the primary reason that the defence has enjoyed such longevity.

Operating as the midfield pivot in a 4-1-4-1, Santamaria is the sentinel in black and white. The 24-year-old is one of the best midfielders in France, his athletic endurance alone has earned him the nickname “4X4”. With a passion for horse riding, Santamaria’s stamina and endurance levels must have been inspired by his own race horse, Déesse de Bouillon. In the 2018/19 season, no player covered more distance than the Frenchman as he averaged 11.65km per match and this season he continued in that same trend.

A hard working and organised side, Angers players are always high in these types of athletic rankings but Santamaria is the jewel in their crown. However, it is not all mindless chasing of the ball. While he can be bettered in a one on one take on it is his ability to make recovering tackles and snuff out danger that protects the defence. His defensive role is primarily to stop incoming attacks but he tends not to overly commit and be caught out of place or give away a foul in the defensive half. Across his four seasons with Angers he has fouled less often than he has been fouled (1.3 per 90 minutes to 1.4), he has never received a red card and only been handed 11 yellow cards.

It is not only his defensive and athletic abilities that continue to improve, Santamaria’s passing has always been centred around keeping the flow of possession smooth and comfortable. He has kept these principles while developing into an astute long passer of the ball, able to switch play with ease and when under pressure. Santamaria has become the prime source of distribution in a double pivot alongside veteran midfielder, Thomas Mangani.

Even as a defensive midfielder, there have been times where Santamaria takes it upon himself to drive up field with the ball at his feet and draw players towards him. Previously used as a winger before joining the western outfit from Tours, his solid dribbling ability has lent itself well to this task. Now, as a concrete tackler, he knows how to read defensive actions and makes himself difficult to dispossess without being cut down.

There is almost never a drop in performance from game to game from Santamaria, his consistency is one of his assets that people tend to forget about. Since joining the club in the summer of 2016 he has only missed seven league games. No outfield player in Ligue 1 has missed fewer in that time. Despite all the incomings and sales at Angers over the years, he has remained the cornerstone of the club’s over-performance.

There was interest in the summer from a host of clubs. Aston Villa made a €10m bid and offered four times his current wage, but Angers rejected this wanting more. Napoli were also reportedly an interested party. It is common to see a player’s performances and their intensity drop after failing to get their desired transfer but there has been no sign of this whatsoever. Still, this will almost certainly be his last season at the club, with Santamaria stating in recent interviews that he would like to play at a higher level.

Recent interest from Atalanta reflects the notion that the 24-year-old deserves to be playing with a club in either European competition. Angers will most likely aim to receive around €16m for him, a very reasonable fee for a player who has never had any injury problems and has gained four full seasons of experience in the French top flight, developing into one of the most underrated midfielders across the continent. Replacing him will be a hard task for Moulin, Pickeu and the recruitment team. But if anyone can do it, Les Scoistes can.

Ligue 1/Ligue 2 referee Jérôme Miguelgorry: “We all have a WhatsApp group. It helps us feel less lonely.”

Florent Balmont will retire at the end of the season, whether its annulled or not