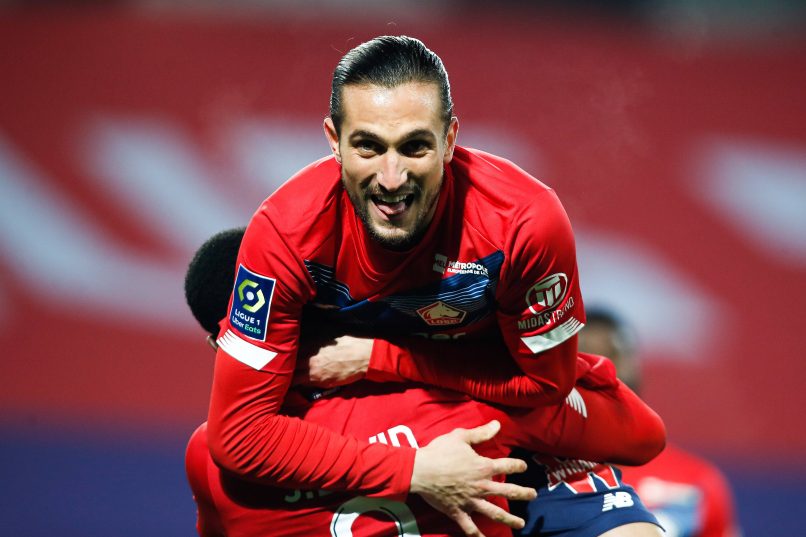 When Lille dismantled FC Lorient 4-0 on Sunday evening, there was a rare WhoScored 10/10 rating handed out, to Yusuf Yazici. That game was his third Man of the Match display this season. The two goals and one assist bring his season tally to 13 appearances and 11 goal contributions. That works out at an outstanding, one goal or assist per 44 minutes.

This is ground-breaking form for the 23-year-old, who only managed a single goal in 2019/20, his first season in France. It feels like Yazici has popped out of nowhere. However, the Turkish international is far more than just the latest starlet on the Lille conveyor belt.

Yazici spent his youth in north-eastern Turkey, in Trabzonspor. At the age of 9, he was scouted and recruited by Trabzonspor, progressing through the academy until he was 17. He broke through to the senior side in the latter stages of the 2015/16 season.

Yazici made 6 league appearances that league campaign, mainly as a central midfielder. When he scored and assisted 4 goals against Rizespor on May 8th 2016, Yazici became the youngest player to score in Turkey that season.

Yazici would make 91 appearances over the next 3 years for Trabzonspor. The key moments begun in the 2017/18 season. Yazici scored 10 goals and made 5 assists. Interestingly, the only player who contributed more goals for Trabzonspor that season, was Burak Yilmaz. He scored 23 goals and assisted 3. The pair are now teammates at Lille.

According to Skor, a Turkish news outlet, at the beginning of the 2018/19 season, Yazici had his head swayed by transfer offers from Europe. 21 years old at the time, Yazici sat out eight weeks of the season. His goal and assist levels dropped to six contributions, as he had to regain the trust of the manager. This was one of the barriers Yazici has had to face in the last 2 years.

One thing that has remained clear since Yazici’s last season in Turkey is his versatility. In 30 appearances, Yazici appeared at central midfielder eight times, attacking midfielder seventeen times, right midfielder four times, and left midfielder once. Yazici showcased a talented, but raw skillset in Turkey. He was a superb finisher, but consistently attempted too many long shots.

After an exacerbated transfer saga, Yazici became Trabzonspor’s most expensive ever export. He left for Lille in summer 2019 for €19m. The clubs even agreed a 20% future sell-on clause, which could turn out to be a huge coup for the Turkish club.

Yazici arrived in France along with Victor Osimhen, Renato Sanches and Benjamin Andre, as a part of the Nicolas Pépé money. Yazici though, had a nightmare start. As Get French Football News has reported consistently, Yazici had struggled to adapt to the physicality and pressing of Ligue 1. In Turkey, Yazici was usually given lots of time on the ball, but in France teams are more active out of possession.

It took Yazici nearly a month to start a game, a 2-0 victory against Strasbourg in late September. By this point, Galtier had spoken publicly of a behind the scenes struggle for Yazici.

“He left his country, his friends, and his family. He did not prepare well for the season, as it took a long time to come here. Yusuf has to digest the changes in his life right now and adapt to France. I am sure he will reveal his potential as soon as possible. “

The problem was that Yazici was still taking too many long shots. According to Understat, 56% of his shots came from outside of the box. 94% of his shots also came with his left foot, showing Yazici had much to improve on.

Galtier appeared to be proven right though. Despite contributing nothing in his first 10 appearances, Yazici grabbed 4 assists 1 goal in his next 8 league appearances. His underlying numbers had improved as well by late 2019. In a win against Dijon, Yazici completed 1 dribble, 2 key passes and 3 shots in 70 minutes, his biggest impact on a match yet. He was beginning to get used to French football.

Then, another hurdle tripped up the young Turk, as Yazici ruptured his cruciate ligament in December. He did not appear again for the rest of the curtailed 2019/20 Ligue 1 season.

Starting the season on fire

The COVID-19 pandemic appeared to be kind to the now 23-year-old Yazici. “The night is always darkest, just before the sun rises,” he recently explained. Yazici had been set to miss EURO 2020 due to his injury, but instead, he managed to use the time to quietly rebuild his strength and ability.

If the dark night was the 2019/20 season, then the sun has most definitely risen for Yusuf Yazici. Playing as a deep-lying-forward, Yazici has finally found consistency. Interestingly, Yazici has found more success in Europe, an area where players generally struggle. Yazici has scored six goals in just two Europa League matches. This comes from two hat-tricks, one coming against Sparta Prague and the other against AC Milan.

Yazici is an attacking monster, able to create and shoot at an industrious level. Even though he failed to score or assist against Celtic in the Europa League, Yazici made six key passes and completed three shots & two dribbles. His most astounding, eye-catching display though came against Lorient on Sunday. Yazici had eight shots and completed seven key passes. That is, of course, unsustainable, but it is a great highlight of Yazici’s skillset.

When revisiting Yazici’s underlying numbers though, it is clear he has improved massively in the long off-season break. He is ruthless in his shot taking. Yazici has a 45% shot accuracy, which is higher than Harry Kane’s 32% (WhoScored). While the majority of his shots are still coming from his left foot, Yazici is finally taking most of his shots inside the penalty box.

If Yazici keeps up this form, then Trabzonspor may be able to cash in well on their 20% sell on fee. For Lille though, Yazici could be a large cog in the system that wins, why not, a surprise first league title since 2011.