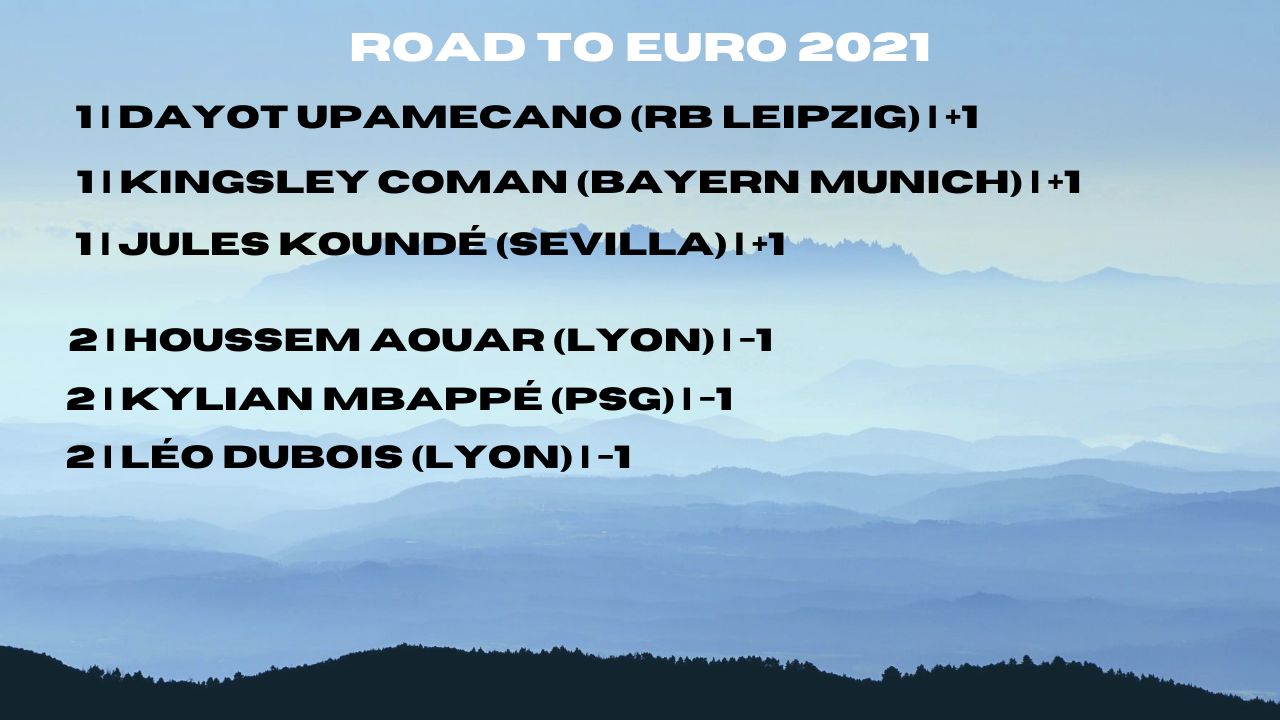 He may have failed to reach the Champions’ League biggest stage, but really was one of the best players in the Portugal-based Final 8. It is clear that Dayot Upamecano only really needed a bigger stage to finally show the world his incredible talent. And what a breakthrough! Pretty much one game was enough to display all his qualities to the world. Against Atletico in the UCL quarter-finals, Leipzig’s centre-back was mesmerising. His control of the German defence was made possible due to his aggressiveness, authority, placement and great sense of anticipation earned him a deserved MOTM award. He even dared some risky, but effective solo runs, through the Colchoneros’ midfield in order to help his team go up the pitch and create openings for his teammates.

Deschamps has probably found himself another great defender in the name of Upamecano and surely that will lead to many sleepless nights to think of his team’s future partnership at the back. Indeed, despite France being full of defending talents, this year might be the perfect timing for Upamecano to establish himself as a very credible contestant for a place in the squad as the right-footed central defender behind Raphaël Varane.

Another individual who will be aspiring to achieve the same annunciated goal is the Sevilla central defender. The future of the French defence is definitely in safe hands. Didier Deschamps already had a large pool of very talented centre-backs at his disposal, but a new name has just been added to the list. Indeed, Jules Koundé was brilliant against Inter Milan in the Europa League final.

Easily identifiable thanks to his afro-worthy of a young Michael Jackson, the 21-years-old was just as groovy. His finesse and technique were a joy to watch and the goals conceded by his side had little to nothing to do with him. Alongside former Nantes man Diego Carlos, he shined by brilliantly containing Inter’s assaults on goal and through delivering long passes to break Conte’s first line of pressing. He even saved his team in the second-half with a world class goal-line clearance. The Paris-born boy earned some precious points in the race of a first call-up for the national team and could be an outside shot for Deschamps’ latest squad, which will be announced on Thursday.

It had to be him. Unless you slept in a cave, you must have noticed that Bayern won their sixth Champions league on Sunday by defeating PSG 1-0. This title was earned thanks to the former PSG youngster Kingsley Coman, who scored the only goal of the game in the 59th minute. Scoring against your former club is always special, but doing it in the UCL final is something else.

The most impressive thing about Coman is that he did not merely just score in that game, he was also one of Bayern’s strongest performers throughout until his withdrawal in the 2nd half. Using his pace and agility, he offered a very tough proposition to his direct opponent on the night, PSG right-back Thilo Kehrer. He regularly brought danger on the Bavarians’ left side and was perfectly positioned to head the ball into Navas’ net. When he is not injured, the former PSG and Juventus man is one of the best wingers around and has settled as a credible option on the wing for France.

Aouar had shone brightly against Man City, but his performance against Bayern was going to be scrutinised. And, well… Lyon got battered 3-0 and that OL’s prodigy didn’t have the influence he had in the quarter-finals. In truth, Lyon lost the midfield battle and Aouar did not have that extra, world-class level, that OL would have required to extend their opening 15 minutes of dominance to create more goalscoring chances for themselves before Bayern settled into the match. Even though he retained the ball and passed adequately, he had the opportunity to sparkle on the biggest of stages… and didn’t really manage it. He was even outperformed by his midfield team-mate Maxence Caqueret who took all the light in this semi-final with waspish pressing and exceptional on-the-ball quick thinking. Even though his first international call-up probably won’t be too far away, it was a disappointing night for the OL academy prodigy.

Another prodigy was playing probably the second most-important game his career: Kylian Mbappé. It’s fair to say that the whole world was waiting for him to perform against Bayern in the UCL final. He didn’t. Just like his best friend/team-mate Neymar, he couldn’t carry PSG’s attacks on his own and had difficulties finding some space in the back of the Bavarian defence. It felt like he was isolated on the flanks and was always harassed by, at least, three Bayern men every time he touched the ball. But above all, he symbolised Paris’ lack of efficacy six yards in front of goal, missing an incredible chance in the box in front of Neuer. His floppy shot from the penalty spot ended in the German’s gloves, preventing PSG from opening the scoring. Knowing the boy’s resilience, he’ll come back stronger, but that was the biggest night in his PSG career and he let the opportunity to write a glorious page in the club’s history slip out of his hands.

The full-back position has always been a problem for Deschamps. On the right, he found a future great in the name of Pavard, but the Bayern man does not really have the attacking verve of a modern-day full-back. But apart from the ex-Lille man, all the other options are quite disappointing, emphasising the Sahara desert nature of choices in this position for the France boss. However, a strong contender for a place in the 23-man squad next summer remains Lyon right-back Léo Dubois. Joining Lyon was a real step forward for the former Nantes captain, and it earned him his first call-up in the national team last season. But against Bayern, in the semi-finals, Dubois did not do much to counteract the idea that right-back is still a problem area for Deschamps. He was imprecise with his positioning and in his passes, leaving the Bayern wingers with a lot of space in his back. Offensively, a part from one dangerous cross, he hardly offer anything, being totally outgunned by Alphonso Davies and Ivan Perisic. Even though he’s very likely at this stage to make the list next summer, his performance was symptomatic of Deschamps’ headaches when it comes to full-backs.