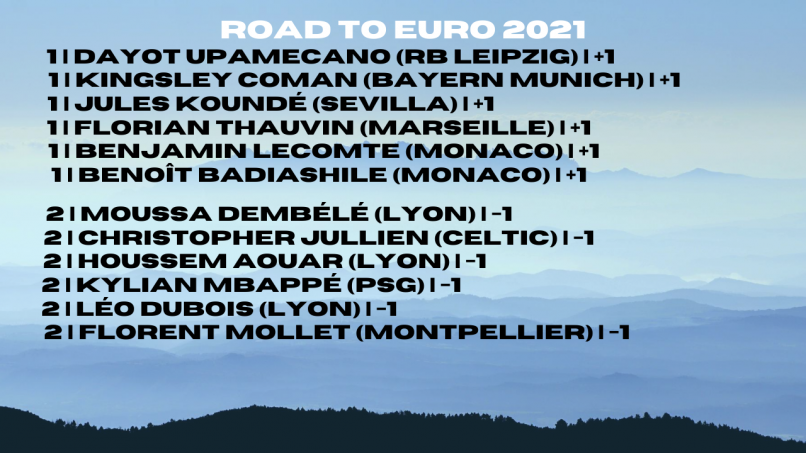 An unusual thing happened on the pitch of Brest’s Stade Francis Le Blé for OM’s first game of the season: Duje Caleta-Car scored a brace that ensured Les Phocéens took their first win of the Ligue 1 season.  But this, believe it or not, wasn’t the most notable thing that occurred. Indeed, it was to witness Florian Thauvin grace the field again! The Frenchman had just come back from a year in hell, filled with a succession of injuries and COVID-19 to cap it all off. Against Brest, he reminded Ligue 1 of his substance and style, with a goal and two assists. Not a bad way to start his season on a personal level and remain on Deschamps’ radar, who has always considered the Orléans-born attacker as one of his best foot soldiers.

Benoît Badiashile is a phenomenon. The 19-year-old AS Monaco centre back scored two goals in his first two Ligue 1 games of the season, including the winner in his team’s 1-0 victory over Metz last weekend. Under Niko Kovac, the strong defender may have finally found stabiliy and a place in the starting line-up to express his impresive talent. Badiashile, who went through all of France’s youth teams, had emerged two years ago with Monaco under the command of Thierry Henry and, despite his club’s relative instability (he sat on the bench a lot under Leonardo Jardim), he still managed to make a little name for himself. But this season could mark a real turning point in the teenage beast’s career: alongside newcomer Disasi and with a manager who truly believes in him and refused to sell him on the market, despite the interest of Manchester United and Bayer Leverkusen. Badiashile is ready to perform and add his name to the already very interesting list of France’s young talented centre-backs vying for an international call-up.

Another strong performance from a Monaco player. Benjamin Lecomte was one of the key men in Kovac’s success at Saint-Symphorien. Indeed, the former Montpellier man made several decisive saves to prevent Metz to equalise, including a wonder stop in the 80th minute that grabbed Monaco the three points. With this great performance, the shot-stopper reminded everyone that he was a safe-bet in Ligue 1 after a first Monaco season tarnished this reputation, owing to his club’s inconsistency in the league. Lecomte is not a nobody in Deschamps’ eyes. He already appeared in the France squad as the third-choice goalkeeper. If a number one spot might be a little bit too ambitious, as France captain Hugo Lloris seems to be untouchable, the third spot in the hierarchy is quite blurry and seemingly gettable.

After leaving Toulouse for Celtic, Jullien added yet another name to the already populous French colony in Glasgow. The tall defender (6 ft 5) quickly made a name for himself amongst the Bhoys and became a regular starter under the eternal Neil Lennon. Dominant just like his team in Scotland, the defender suffered a huge blow as his team was knocked out of the Champions’ League second preliminary round by the Hungarian side of Ferencvaros. The team of the late « Magic Magyars » legend Zoltan Czibor were by far the underdogs but still managed to win at Celtic Park, with Jullien being guilty of laziness on the first Hungarian goal. A night to forget for the Frenchman.

Mollet’s first Ligue 1 game of the season was another day to forget as well. The diminutive playmaker was on the pitch for only 43 minutes against Rennes and left his team with ten men for an entire half. Montpellier ended up losing after a goal from Camavinga. Not the best way to start off the season for Mollet who had become an essential player for Der Zakarian since joining Montpellier from Metz. His good performances helped Montpellier clinch a 6th spot in the league last season. But against Rennes, Mollet’s hot blooded temper led him to leaving the field early and is unfortunately nothing new as he had received five yellow cards last season.

It’s been a frustrating summer for Dembélé. It started with a blow against Juve, as Dembélé didn’t appear in the starting line-up. OL ended up going through the next round despite losing to Ronaldo’s brace on the night. It was the same story against Machester City, but this time, Moussa let out his rage with two goals in a matter of minutes that sent Guardiola’s Sky Blues home, leaving City frustrated, again. Dembélé last blow came in the semis, where Garcia again opted for Depay and Toko-Ekambi to start.

Lyon’s first Ligue 1 tie was the perfect time for the former Celtic player to dominate. But he failed to impress, missing everything he tried in front of goal, facilitating Depay to take all the limelight with a hat-trick… a missed opportunity to prove to Didier Deschamps that he could be a credible contender for a French national team call-up.