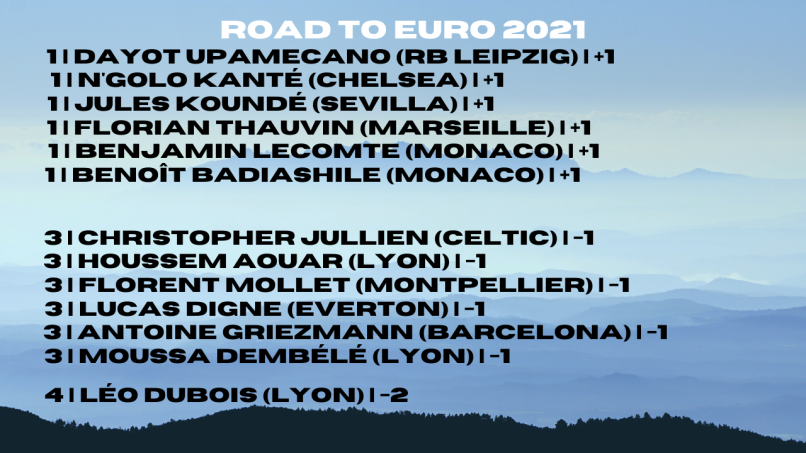 Definitely the star man in the Friends Arena at the weekend. His workrate was impressive and he seems to be back at his best. He kept on harassing the Swedish players and earned back France an incredible number of balls. That performance was classic Kanté and it definitely feels good to see him doing what he does best again after facing an extend period of emotional stress, having been particularly affected by the threat of COVID-19. His presence in the forthcoming squad lists was never in doubt, but the amount of injuries he faced last year posed serious questions regarding his level. At the weekend, in his very discreet but effective style, he reminded everyone what a unique player he is.

A real captain’s performance. Against a timid Swedish team, he made the saves that mattered. Against Marcus Berg, he was quick to throw himself on the floor to prevent the veteran’s shot to end up in the back of the net. Also, he blocked several long shots from the opponents that reassured his back three. Aged 33, he remains the main man between France’s sticks. Considering his level at the moment, we will likely see him tending to France’s goal for several years more. In truth, Deschamps’ only concern with Lloris will be to find a decent successor for him.

A strange game for the French wonder-kid. Even more so when you take into account the fact that he has just tested positive for COVID-19. Placed upfront alongside Giroud, he rarely made good choices in attacking move construction. But he unlocked a very tight and boring game with a bold, but fairly fortunate solo run through Sweden’s left flank. To his credit, even if he got lucky to see the ball pass through the defenders thanks to a jammy deflection, he was clinical enough to put the ball in the net with his left foot between Olsen’s arm and post. France would probably not have won it without this move. Despite all the criticism he’s faced in the past few weeks following his disappointing Champions’ League final performance, he is the type of player capable of winning a game on his own. Not something everyone can do.

It’s been a difficult season for Griezmann to say the least. Critically lacking confidence, L’Équipe de France has always been his chance to smile again on the pitch. Unfortunately, things didn’t go as planned. He missed everything he attempted, including a last minute penalty (his third miss of this kind in a row under the French shirt) and didn’t have the influence he normally has. His poor form directly impacts France’s tempo as the team is built around him in the fluid #10 role. Antoine’s lack of game time at Barcelona and the Lionel Messi saga haven’t brought about a stable environment for him and this is a real issue. Griezmann cannot afford another poor season and if he cannot stem the tide then he should start worrying about the immutability of his presence in the starting line-up.

Another insipid performance from the former Nantes defender. His showing confirmed he is definitely more suited to a back four. Dubois doesn’t have the technical ability to project himself as a hyper-potent offensive full-back. In a back four, he is a reliable enough presence right back praised for his defending abilities (something that tends to disappear as a priority in this position nowadays). In a back three, he doesn’t bring the extra spark you expect from a wing back, notably through crosses. He never managed to reach Giroud and his only dangerous attempt was a failed cross that ended up on Olsen’s crossbar… As Pavard’s return is getting closer, Dubois missed a chance of putting a doubt in Deschamps’ mind about who the starter should be.

Just like his colleague on the right, Digne failed to impress. Since the the 2018 World Cup, the left-back spot has always had more qualified candidates than on the opposite side and that facilitates intense competition. Digne had a great opportunity to further his claim against Sweden. Unlike Dubois, the system suited him more. Digne has always been a technically gifted defender. Decent on the ball and able to deliver crosses, this wing back position could have been a chance for him to display all the qualities he shows with Everton. But he didn’t. He was disappointing yet again. He seemed weak against the tall Swedes and only made one dangerous cross. Not enough to credibly be in contention for a place in the final 23 for the Euros. To cap it all off (without even mentioning Hernandez coming back on form), Ferland Mendy made a small but convincing entrance as a substitute and seems to have the perfect profile for a back three system.