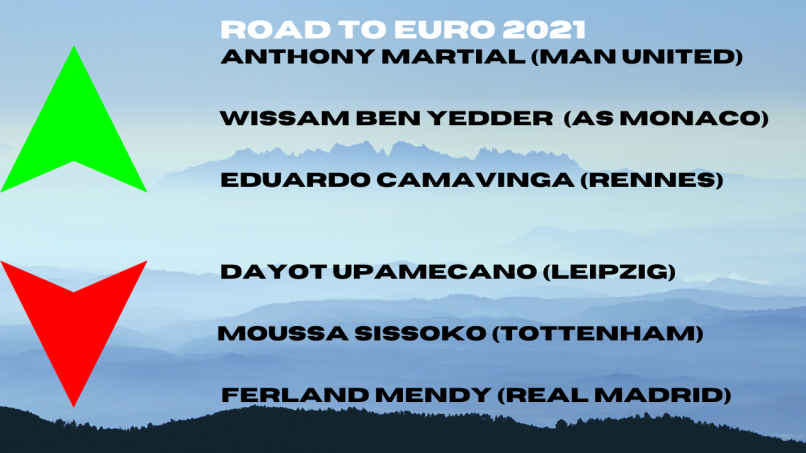 Despite having spent most of his English career on the flanks, Anthony Martial’s natural position has always been upfront. Against Croatia, he was lined up alongside Ben Yedder in Deschamps’ hybrid 3-4-3. With Griezmann in support just behind, he was a real threat for Les Bleus. He was involved in two goals. On France’s equaliser, he assisted Griezmann after a world class move involving Ben Yedder and then, he led Dominik Livakovic to put the ball in his own net. He majorly contributed to France’s three-minute turnover just before half-time. Starting for the first time in two-and-a-half years for Les Bleus, he made a strong impression and his versatility could be an asset for Deschamps’ future plans, although he still faces an uphill battle in making the plane for next summer.

Just like Martial, Ben Yedder scored some precious points in the race for a spot in the 23. He offered a very credible alternative to Giroud, making himself available for his colleagues, playing smartly and displaying his gracious technique and close control. Just have a look at his lovely pass to Martial on Griezmann’s goal… Ben Yedder was also involved in France’s second, as his cross forced Dominik Livakovic’s mistake. The Monaco man could be a very strong option for Deschamps, as he offers something completely different. His technical relationship with Griezmann is brilliant, which is a strong asset in the gaffer’s mind. The only unknown part of the equation is whether he would be complementary to Mbappé as well…

Some players are born with natural flare. Camavinga is definitely one of them. Was it due to the context of the game? Or is it because he is a future world class player? Probably both. Indeed, the young starlet made his grand debut in the 62nd minute and blew everbody’s mind in less than thirty minutes. By coming on aged 17 years and 300 days old, he became the youngest player since 1945 (!!!) to wear the French jersey. On the pitch, he was brilliantly confident with the ball and made France’s attacking move construction more fluid. The fact that France’s game was ameliorated by the entry onto the field of a 17 year old is unbelievable. With Camavinga, just like Mbappé at the World Cup, France have probably found themselves another gem to show world – will Deschamps choose to do next summer or wait a bit?

It’s been a poor first international stint for Upamecano. Against Perisic and co, he looked shaky and shy. He never really managed to express the qualities he shows at Leipzig and wasn’t dominant in defence either. Especially on Josip Brekalo’s goal, he couldn’t prevent the Croatian from shooting despite the presence of three other French teammates. His bad performance was saved by a nice headed goal following a corner but overall, it was a disappointment. Although he failed to convince during the two games, and especially against Croatia, this was not an accurate reflection of his quality. But he clearly needs more time to develop and to believe in himself on the biggest stage.

Deschamps’ favourite soldier was back in the starting eleven. It seemed like a very interesting idea to play him on the right side of the midfield, as a sort of wing-back. Everybody knows Sissoko’s style of play, made up of long-busting power and runs. Deschamps appeared to try to replicate the EURO 2016 formation where Sissoko played as a right midfielder in a 4-2-3-1 formation. But that didn’t happen in the Stade de France on Tuesday. Sissoko kept cutting inside, although he had to cover his flank. He was not dangerous with crosses and didn’t have the anticipated impact. A shame, as his profile could have perfectly matched the coach’s formation. With this poor performance, he didn’t score any points, but he will remain an option that Deschamps looks favourably upon in the centre of midfield… even more when considering all the absentees that could come back and take his place.

Another disappointing performance from a French full-back. Mendy’s case could be even worst as he had a real option of striking the gaffer’s mind after Lucas Digne’s poor display in Sweden. Being a very attacking-minded defender, Ferland Mendy was put in perfect conditions by Deschamps with the formation. Unfortunately, he couldn’t open the gift that was given to him and didn’t impact the game in any ways. Also, he was kind of passive defensively and was involved on France’s second conceded goal. A huge blow for him and a growing issue for France as no one since Hernandez gave Deschamps enough guarantees.