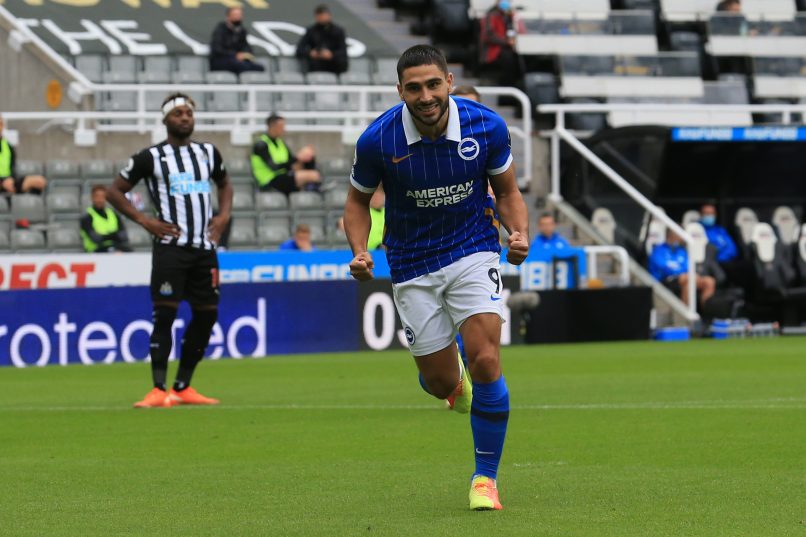 Paris needed a win at the Allianz Riviera in their fourth game of the season against Patrick Vieira’s Nice. This tie was, on paper at least, a perilous one. But that was without considering Kylian Mbappé’s return in the starting eleven. On the left wing, he was untouchable and played a huge part in his club earning three deserved points. His opposition in duels for the afternoon, Nice’s starlet Youcef Atal, was left helpless by the Bondy prodigy’s runs on the wing and you almost felt sorry for the Algerian. Mbappé was involved in two of his club’s three goals. First, by opening the scoring (and his goal tally for the season) with a great penalty which he won himself seconds earlier. After that, he ruined Youcef Atal’s day once and for all with a subtle nutmeg and a powerful shot that Nice’s keeper Walter Benitez could only deflect into Angel Di Maria’s feet. This performance proved two things: Mbappé is PSG’s real X-factor, and he is definitely better on the left wing, his original position in France’s youth teams. Something for Deschamps to think about…

The Red Devils’ attacking misery at the weekend was exacerbated by one man in particular: Mamadou Sakho. The former PSG and Liverpool cult hero was imperial at Old Trafford and helped the Eagles clinch three already vital points. Against some clueless Devils, Sakho was dominant and blocked the multitude of crosses attempted by Solskjaer’s players. On United’s goal, he was surprised by Ward’s deflection and couldn’t prevent Donny Van de Beek’s shot. But overall, it was a very solid performance from the Frenchman. His last international game with France was in November 2018 against Uruguay and he has not appeared in the squad since. This performance might not earn him a direct call-up for the Euros, but reminded Deschamps that he could still have a part to play in France’s national team, even if it is more likely to be in the dressing room than on the pitch.

It only took Neal Maupay three minutes to score two goals at St James’ Park. The striker may well have been born in Versailles, the city of Louis XIV the “Sun King”, but it is fair to say that he was quick to turn off the lights in Northern England. The Ligue 1 product, who was a revelation at Brentford before entering the Premier League, has established himself as a safe bet in England. The French striker’s progression has been linear since he landed in the kingdom, although a lot of people didn’t believe in him earlier on during his journey. Many thought it was a mistake to leave the great Ligue 1 for the Championship… the truth is that Maupay’s career plan has worked out pretty well. Ten goals for his first spell in the Premier League last season, already two in two games this year. If he keeps on scoring, the only thing he’ll need to become a credible contestant for a call in the national team is a little bit more exposure…

Is it the system? Is it Ole Gunnar Solskjaer? Or is it his fault? Pogba remains an enigma at Man United. Against Crystal Palace, his influence was poor and his performance was bordering on lazy. The fact he had tested positive for COVID-19 at the end of August (which led him to miss United’s pre season) is not an excuse. At Old Trafford, he had the chance to shine against a team ready to defend for the entire game. Unfortunately, he didn’t take it. More worryingly, several clips of him went viral, in which you can see him losing the ball twice in a matter of seconds before leaving Bruno Fernandes to get it back for him and ultimately fouling a Palace player. At 27, Pogba is running out of time. He probably should have left United already and his current performance level raises several crucial questions for his future with Les Bleus: is his place in Deschamps’ starting lineup still guaranteed?

Since his sloppy dance moves on PSG’s turf after OM’s historic victory in Le Classique, Payet brought back to his old demons. At home against his former club Lille, he was invisible and his chemistry with Florian Thauvin was non-existent. He is supposed to be the catalyst for his team, but did nothing of the sort at the Vélodrome and was subbed off alongside Thauvin by André Villas-Boas before the end of the game. His physical shape remains a serious concern as he can’t perform for an entire game anymore and therefore OM’s game plan is affected as a result. The Euro 2016 hero will have to work hard to find a place in Deschamps’ team.

Lille should have won it at the Vélodrome in Sunday’s top Ligue 1 fixture. Lille opened the mark thanks to Luiz Araujo and held on tight until the last ten minutes. On a corner angled by midfielder Morgan Sanson, the little Valère Germain, who had just come off the bench, managed to place a header into Mike Maignan’s net. The Lille keeper was not dominant in the air and let the former Monaco striker equalise. A blow for the ex-PSG man, who has become a reference in his position in Ligue 1. Maignan went through all France’s youth categories and received his first senior call-up in 2019. He has never played a game for Les Bleus at senior level but is one of the heir apparents to Hugo Lloris. This poor performance could have an impact in his race for a spot at the Euros as the second or third-choice keeper, with challengers in Alphonse Areola and Benjamin Lecomte to contend with.