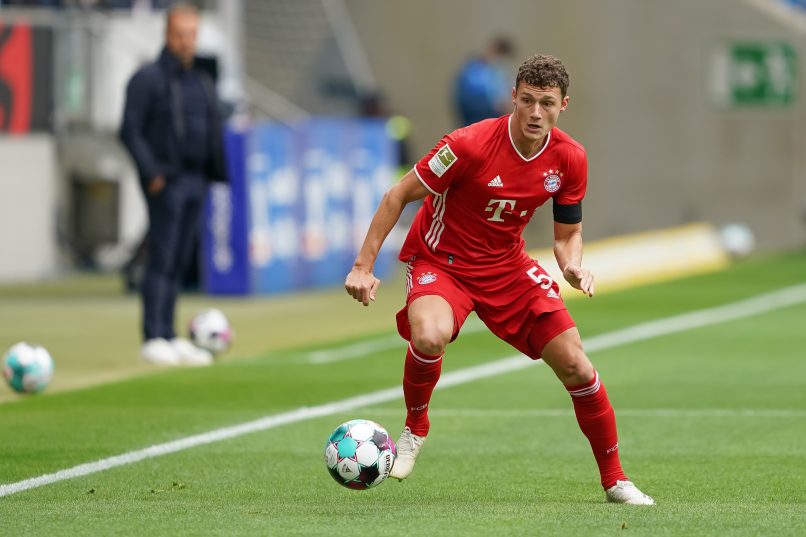 Rennes are sitting at the top of the league thanks to their impressive victory at Saint-Etienne’s Stade Geoffroy Guichard (3-0). Against Claude Puel’s men, Ligue 1 prodigy Eduardo Camavinga was incredible once again. This time, he didn’t score nor provide any assists, but he just mastered the midfield perfectly. His ability to always push forward like a pure playmaker, combined with his stamina allowing him to drop deep to help his teammates defend when required, make him one of the most complete players in Ligue 1. Reminder: he’s just 17… In his 48th Ligue 1 game, Rennes’ number 10 showed he wasn’t just a technical midfielder, capable of breaking the lines and scoring goals (which was already impressive enough). He is also a pure box-to-box player. Just like Paul Pogba at the World Cup, Camavinga has this ability to be everywhere on the pitch and participate in all of the team’s efforts. He has a bright future and a profile that matches Didier Deschamps’ philosophy.

The game between Sheffield United and Leeds saw two young talented goalkeepers go up against each other: Aaron Ramsdale and Illan Meslier. The latter, aged 20, won this face off. Indeed, Marcelo Bielsa’s team left Bramall Lane with the three points thanks to a goal from Patrick Bamford, but mostly due to a masterclass from the young Frenchman. Illan Meslier has been a revelation in the Premier League. In his 12th game for the Yorkshire team (his second in the English top-flight), he was the hero, making several decisive saves to prevent his team from conceding an opening goal. One particular stop went viral: in the 29th minute, he blocked a point-blank shot from Sheffield’s John Lundstram. This world class block was followed by several others. The 6’4 ft keeper with a baby face was playing for Lorient in Ligue 2 just two years ago. He could well be Hugo Lloris’ heir, but will this season be enough for him to clinch a spot in Deschamps’ stable for the Euros?

It was another good day at the office for Wissam Ben Yedder. Against RC Strasbourg, the French striker netted a brace that helped Niko Kovac’s men clinch the three points. His chemistry with newcomer Kevin Volland was impressive and suggests a promising partnership upfront is being formed. Ben Yedder’s ability to always be in the right place at the right time is astonishing, as is his finishing. Few players seem to have the skill to merge power and placement with such precision: Ben Yedder’s futsal background really helped him master the art of finishing. Furthermore, he has the vision and the passing skills to breach his opponents’ defences at any moment and combine with whoever is active enough. When he left Sevilla for Monaco, everyone thought it was a very risky move for the former Toulouse man to join the Principality quagmire and that he should have stayed in Spain to pretend for a place in Deschamps’ team. Well, it turned out to be a very wise move, as he has guaranteed playing time every weekend and has established himself as one of the most deadly striker in the league.

Bayern lost 4-1 against Hoffenheim on Sunday, which ended their run of 32 games without being beaten. The reality check was hard and Bayern’s defence was completely submerged by Hoffenheim’s attacks. Playing on the right side of the back four, Benjamin Pavard was in great difficulty. He was subbed off by Hansi Flick in the 57th minute after a complicated game in which he was found wanting for the hosts’ second goal. His poor deflection was intercepted by Mu’nas Dabbur, who converted the gift to make it 2-0. In Bayern’s very high defensive line, he struggled with the perpetual runs of Andrej Kramaric in behind him. One of those darts almost cost Hansi Flick’s men, as the Croatian smashed his shot on the crossbar. The Frenchman was taken off before the 60th minute (which didn’t prevent the Bavarians from loaing) and that wrapped up a poor performance from him. Although his place in Deschamps’ squad is not really in danger, he’ll have to do better next time.

France’s misery on the left side continues. Benjamin Mendy was in Pep Guardiola’s side that conceded five goals at home against Leicester (2-5). The Frenchman delivered some interesting crosses, but was swamped by the Foxes’ repeated assaults, just like the rest of his teammates. On Jamie Vardy’s second goal, he left Harvey Barnes cross from his side and on Leicester’s last goal, he fouled James Maddison in the penalty area, leading to the referee to point to the spot. Jamie Vardy netted it, which put the Citizens hopes to an end. Mendy is not known for his great defensive skills and the stupid foul that led to the penalty was the perfect example of it. This poor performance is not a good news for him, as his chances of integrating Didier Deschamps’ team are slowly fading away…

His presence in the last French squad was a huge surprise. After refusing to be in the 2018 World Cup reserves list, the chances of seeing Adrien Rabiot playing for the national team again (at least, under Didier Deschamps) seemed faint. But, in an incredible turn of events, there he was. Since the last call-up, he haw played several games for Andrea Pirlo’s Juventus. But the last one against Roma was a bit complicated. The Juventini could only draw 2-2 in Rome, thanks to a brace from the one and only Cristiano Ronaldo. Adrien Rabiot was targeted by the Italian media after the game, as he was the main villain in Juve’s poor performance. His handball in the box led to a penalty that saw the Romans open the mark. But his misery didn’t end there. Indeed, he was guilty of a strong challenge on Henrikh Mkhitaryan that cost him a second yellow card… he left his teammates in the 61st minute as they were 2-1 down. A Ronaldo penalty saved Juve’s day, but his performance was largely criticised and was bad publicity for him.