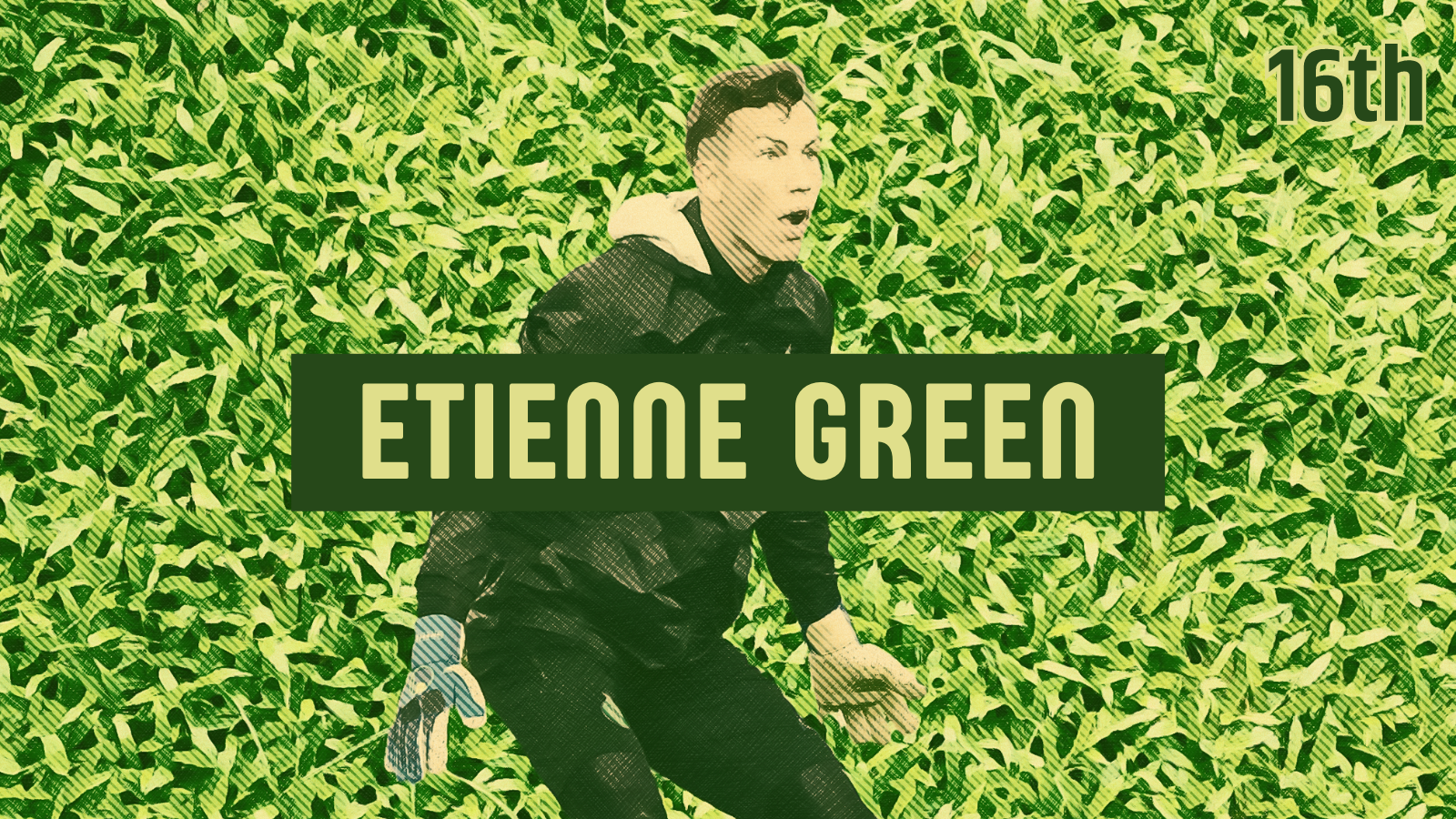 This feature is the latest in our series looking at the top 20 hottest properties in Ligue 1; those players to keep an eye on this season and who are most likely to feature heavily in the 2022 summer transfer window. Look out for number 15 tomorrow and follow the run down in full here on GFFN.

Nominative determinism is the notion that people are more likely to pursue certain areas of work that have some connection to their name. Few embody that idea more than Etienne Green. Born in Colchester to an English father and a French mother, the 21-year-old has become France’s leading goalkeeping talent after bursting into the first team at Les Verts (the Greens) of Saint-Étienne earlier this year. Although seemingly made for Saint-Étienne, having recently declared for England, Green has the talent to become England’s next great goalkeeper.

At the start of last season, Green wasn’t even one of three goalkeepers included in Claude Puel’s senior squad, while a first team debut didn’t arrive until April this year. However, in the 19 senior games Green has played since, he’s asserted himself as Les Verts’ number one and a leading Ligue 1 young talent. Unusually, but fittingly, dressed in Saint-Étienne’s iconic green shirt, usually reserved for outfield players, Green marked his debut with a clean sheet, a string of smart stops and a penalty save. Upon returning to the dressing room the keeper was met by a wall of noise and sprayed drinks as team mates celebrated his save from Renaud Ripart’s spot kick, a moment Green said he’d remember “for the rest of my life.”

Although Green only got his chance due to Stéphane Ruffier’s acrimonious departure, first choice Jessy Moulin’s Covid diagnosis and his understudy Stefan Bajic suffering with injury, “a coincidence of circumstances, I’m fortunate” recalls Green, he emphatically seized his opportunity via standout displays against Brest, Lille and Marseille as Puel’s charges rescued some respectability from a worryingly drab campaign, eventually finishing eleventh.

This term, Green’s reflexes have remained similarly cat-like while his performances have become increasingly assured. A first half battle with Lyon’s Houssem Aouar in the Rhône-Alpes derby before the October international break was a high point. Although Aouar eventually breached Green’s defences, Green made three saves from the Frenchman, two of which were world class; a strong wrist from a close range volley and a flying left hand to halt a header. Twelve saves across consecutive August draws with Lille and Lens, including a pair of one-on-one stops from Burak Yilmaz and Jonathan David, helped ASSE to some valuable points too.

Speaking in a quiet southern English accent with a subtle Essex twang, there’s an ineffable quality to the unassuming Green’s displays. Although he lack’s the physicality of some of his peers and barely fills his 6’4 frame – former ASSE youth coach Mickaël Dumas says “he’s always had a slender profile… he filled out later than others” – the Englishman has a knack of producing match-winning flying stops at crucial moments, drawing parallels with a young Iker Casillas. Meanwhile, as evidenced by his withdrawal with concussion after a collision against Strasbourg at the weekend, despite a reserved manner, Green is fearless in attempting to command his area and not scared to take a beating in defending his goal.

Former Saint-Étienne captain Mathieu Debuchy described Green to L’Equipe as “a good guy, respectful, discreet, attentive, incredibly calm, and hard working.” Dumas meanwhile explained “his greatest quality is his mastery of his emotions, his technique, his relationship with the ball, and his decision making. Whether he plays or not, he always trains well and rarely gets injured.” Enthused ASSE defender Timothée Kolodziejczak adds that Green, despite an understated, even shy, persona “gives a lot of serenity to our defence.”

As a young and inexperienced player, mistakes have been made too. Green is, to his credit, one of Ligue 1’s more proactive goalkeepers but that willingness to take responsibility has led to avoidable errors. A rash lunge at Kylian Mbappé’s feet to concede a late penalty as Puel’s side lost 3-2 in Paris last season and a similarly ill-advised dart from his line to fell Monaco’s Myron Boadu, which resulted in his dismissal last month, are notable examples. Although Green actually won the ball, and will still be flabbergasted VAR didn’t rescue him, the penalty he saved on debut was awarded after Green himself brought down Nîmes’ Karim Aribi.

“He must improve his communication, especially with his defenders, and impose himself in match situations” Debuchy concedes, explaining that once “the euphoria subsides… the hardest part is staying consistent and decisive.” Puel affirmed that “we signed him to a pro deal last year, but there were a lot of things he lacked. He needed to assert his character and his personality. He’s intelligent and calm, but was rather introverted. André [Biancarelli, Saint-Étienne’s goalkeeping coach] opened him up.”

Nevertheless, that overriding quality and maturity despite so few senior outings has attracted reported interest from Premier League sides in Tottenham and West Ham. But Green’s connection to Saint-Étienne remains strong. Being from the area, his mother named him after the city and the now 21-year-old has been associated with the club since the age of nine, even acting as a ball boy in the past. Green also lists former ASSE keeper captain Ruffier as an idol. “He was a great leader of the team and someone I admired,” Green told the Ligue 1 Show. “When I was about 17, I had the luck to come and train with him several times and I was like: “Wow”. I thought he was amazing, so I tried to replicate his game a bit. His saves on the line were amazing and so were his reflexes.”

Despite leaving Colchester at just four, Green announced he’d made “a painful choice, if not an impossible one” to declare for England instead of France this summer. “After the European Championships, the English federation asked about my possible interest,” Green wrote on Instagram. “It’s like asking someone to choose between their parents… It’s not a rational or opportunistic choice, [they’re] two great countries and two great teams that have always made me dream.” Green was also careful to note: “This of course does not change my deep ties, my attachment and my commitment to Saint-Étienne!”

Having previously been called up by France under 21s, Green made his England under 21 debut against Andorra earlier this month. Although he will be eased in, with Jordan Pickford routinely impressing in an England shirt ahead of a solid crop of younger English keepers, in truth Green should already be pushing for a spot in Gareth Southgate’s senior squad and has the potential to become England’s next number one. Although the Saint-Étienne keeper will be heading many scouting reports across the continent, consistent game time should be his aim for now. For the wider footballing community, however, despite a low-profile, remembering his name won’t be too difficult.