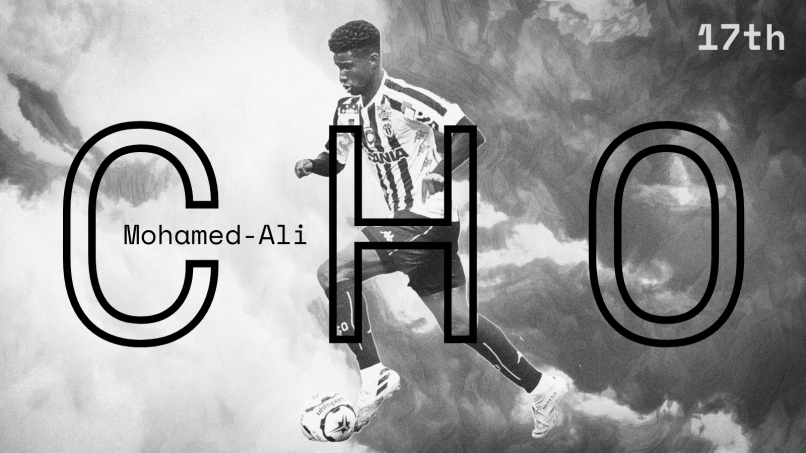 This feature is the latest in our series looking at the 20 hottest properties in Ligue 1; those players to keep an eye on and who are most likely to feature heavily in the 2022 summer transfer window. Look out for number 16 tomorrow and follow the run down in full here on GFFN.

Despite an eye-catching name, Mohamed-Ali Cho has, for the last year, managed to keep a relatively low profile. In August 2020 he made his first senior appearance the age of just 16 (and 224 days). His 10 minute cameo that day for Angers at Stade Raymond Kopa was a quiet one, having entered the field with his side two down to Laurent Koscielny’s Bordeaux.

Fast-forward twelve months, however, and everything has changed. Cho has finally opened his account with the new-look and in-form Angers under Gérald Baticle as the young forward became the first player born in 2004 to score in the French top flight, with a goal against Rennes in late August that exemplified his strengths. Receiving the ball on the turn just within the Rennes half, Cho used his physique and pace to send Rennes centre-back Nayef Aguerd sprawling to the floor and race towards the visitors’ box. Despite an average first attempt on goal, Cho was able to convert at the second time of asking after goalkeeper Alfred Gomis’ parry fell kindly.

It’s Cho’s physical prowess that has caught the eye. At six feet tall and with a turn of pace resembling a more compact player, it’s no surprise that the attacker has been able to impose himself at professional level despite his youth. More excitingly still, the teenager will naturally develop physically as his career progresses. Even before his first goal, his finishing is an area for development, Cho had already shown flashes of his ability.

Starting against Strasbourg on the opening day, Cho played an important role in the second and final goal of the game. Dribbling past make-shift centre-back Ibrahima Sissoko on the left, the teenager delivered a dangerous ball into the box which created the opportunity for Stéphane Bahoken to seal Angers’ win. Equally, it was Cho’s pace that drew a careless and frustrated foul from Lyon’s Maxwell Cornet, resulting in his second yellow card, a week later. Following their 3-0 defeat at Stade Raymond Kopa, OL captain Léo Dubois explained that “we’d been warned, we knew that he was very quick.”

Having started all but one game this season, Cho has mostly appeared in a front two with Sofiane Boufal, a player with whom he has developed a good relationship, the two forwards having more in common than might be expected. Both have Moroccan heritage, Cho through his mother and Boufal through both parents. More importantly, both spent time in England. Most Premier League fans will remember Boufal as Southampton’s tricky dribbler and scorer of the odd wondergoal. Cho, meanwhile, spent five years with Everton’s youth sides from 2015 to 2020. The teenager, born in Paris, even twice represented England under 16s. This is a result of his twelve years living in both London and the North West of England, two periods separated by a five year stint in Paris. Such back and forth across the Channel was dictated by the professional needs of his parents, who add eligibility for Morocco and Côte d’Ivoire to England and France at international level.

Despite having represented France under 21s most recently, in two qualifiers for Euro 2023, Cho is, by his own admission, as English as he is French. Speaking to The Secret Scout in March, he explained that having played in both national setups has helped rather than hindered his development. “It’s a blessing for me,” he said. “It’s definitely an advantage. I know both cultures. Especially in football, I had to adapt to English football when I came back to Everton.” More specifically, when returning from the PSG academy, it was “the intensity, the dynamic plays and the aggression” that forced the teenager’s game to evolve.

It’s no surprise that Cho has broken records at such a young age. At just seven, he was already playing an age group above and, upon leaving PSG at 12, he was playing regularly with those two years older than him. It makes sense, then, that when leaving Everton, many of Europe’s “biggest clubs” were interested, as described by Cho himself. Philippe Leclerc, the man responsible for Angers’ recruitment, also said as much. Speaking to So Foot, he went on to say that, in order to recruit Cho, “we offered a real project in guaranteeing that he would soon be made part of the squad and that he would be playing within four to 12 months. To say to a 16-year-old lad that he will soon be playing with the pros will interest him.”

Despite the draw of larger clubs, Cho has taken advantage of that promise. The teenager explicitly mentioned that “they trusted [his] talent and [his] potential”, citing this as the main reason for his move to the West of France. That trust has been repaid as, 30 professional league appearances later, Angers are reaping the rewards. The Angevins currently sit in the European places after ten games, with only two defeats. A far cry from their 13th place finish last season and a worrying four point gap to relegation.

So, the future seems bright for Angers’ teenage sensation. Just this month, he was been called up for the France under 21s’ second round of qualifiers against Ukraine and Serbia and contributed an assist off the bench in both comfortable wins. Naturally, only time will tell how far he might go, but there appears no reason not to be optimistic.