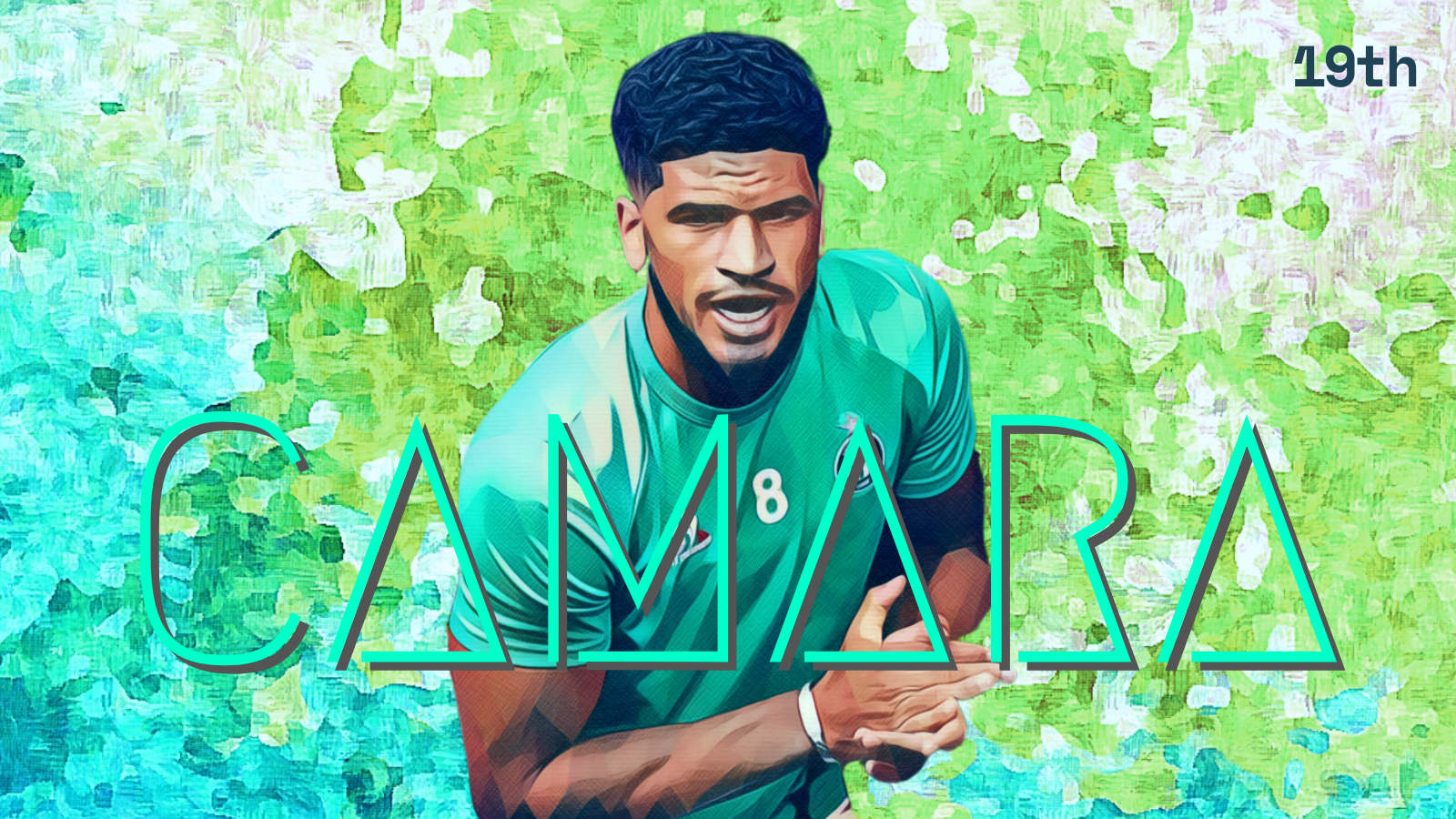 This is the latest in our series looking at the 20 hottest properties in Ligue 1; those players to keep an eye on and who are most likely to feature heavily in the 2022 summer transfer window. Look out for number 18 tomorrow and follow the run down in full here on GFFN.

If you ever wondered what a breakout season without the hype looks like, look no further than Saint-Étienne midfielder Mahdi Camara’s year. The 2020/21 campaign was his first full season as a senior starter having graduated Les Verts’ academy but was soon named captain. It’s almost inconceivable, then, that transfer links have been limited to some half-hearted bottom half Premier League sides. For now Camara’s profile doesn’t match his talent, but that could soon change.

Now 23, Camara played over 500 more minutes than any other Saint-Étienne player last season, missing only one league game, and was voted Player of the Year by the ASSE fans. It wasn’t just the quality of his performances that shone brightly during a bleak and lifeless season for the club, it was the kind of leadership he showed on the pitch, the maturity that belied his years and the manner in which he took responsibility, never hiding.

In a Saint-Étienne team severely lacking strong leadership following the retirement of club legend Loïc Perrin, Camara was a key factor in ultimately keeping his team up as they flirted with relegation for most of the campaign, the midfielder stepping up to lead even before receiving the armband. Manager Claude Puel knew he could count on him.

Camara is a combative midfielder capable of playing multiple roles in multiple setups, able to quickly adapt. He’s been deployed as part of a double pivot in a 4-2-3-1, as the right-sided central midfielder in a 4-3-3, as part of the central midfield two in a 3-4-1-2 as well as in a 4-4-2 and as a more attacking midfielder in a 4-1-4-1. Further evidence of his versatility was seen last season when used more than once at right-back and even as a left-sided and right-sided centre-back.

At his best, he’s a mobile player that mops up everything in central areas, hassling opponents and winning the ball back surprisingly cleanly. In 37 games last season, Camara picked up just four yellow cards and just over one foul per game while averaging 4.8 tackles and interceptions per game. A remarkable feat, with cards often a hazard across his variety of roles.

The Frenchman also placed 6th in Ligue 1 for pressures, evidence of his relentless energy, while proving a difficult man to beat in midfield, being dribbled past only 32 times across last season despite playing in a role susceptible to take-ons. In fact, dribble completion is generally higher around centre areas than it is out wide, even though wide men are considered the more established dribblers.

While Mahdi doesn’t boast the ball retention of midfield partner, Yvan Neyou, he is still proficient in this area. Although progressive passing needs work too, Camara makes up for it with good progressive carrying, adding verticality with some explosive bursts that open up the play and draw opponents in, making him useful in transition. The midfielder’s movement also impresses, constantly opening up passing lanes meaning he’s always available as an option to help Saint-Étienne retain possession and move the ball.

As a developing talent, Camara predictably has flaws. He sometimes shuts down when heavily pressed and can become more erratic when trying to get out of those situations, often making the wrong decision or playing a poor pass. Fortunately, however, Camara rarely plays himself into trouble and avoids taking risks while sensing danger quickly, even if his reactions and decision making can be a little slow. He’s a high intensity player without the ball but a more methodical one otherwise.

This flaw is instead an asset when he’s defending and helps him avoid cards – Camara has only been sent off once in around 100 games – as he takes his time to make the right ball-winning decision. But against solid pressing teams that eliminate space and limit options, this hinders his effectiveness in possession. Often an underappreciated asset, Mahdi is also excellent at turning on the ball. Such seamlessness in changing gear and direction can lead to quick transitions or evading danger while it also helps when receiving passes in less than ideal situations.

The hype and expectation surrounding the player might have been surprisingly low key so far, neither reported interested Premier League club – one a promoted side, the other in mid-table – made good on their interest last summer, but the fervour is expected to grow as Camara edges closer to an exit from Saint-Étienne. Despite signing a contract extension to 2024 in April 2020, L’Équipe reported in August that Camara is unhappy over his fairly low €40k gross monthly salary, less than half of what fellow ASSE midfielder Zaydou Youssouf earns.

In truth, that displeasure seems fair considering what the 23-year-old has produced over the past year and, although Claude Puel reportedly wanted to veto any move away this summer, a transfer could soon be in the offing. Who knows where Camara will end up but the side that ties him down will be getting a solid player with a lot of potential. Hype or no hype, smart clubs should already be watching him closely.