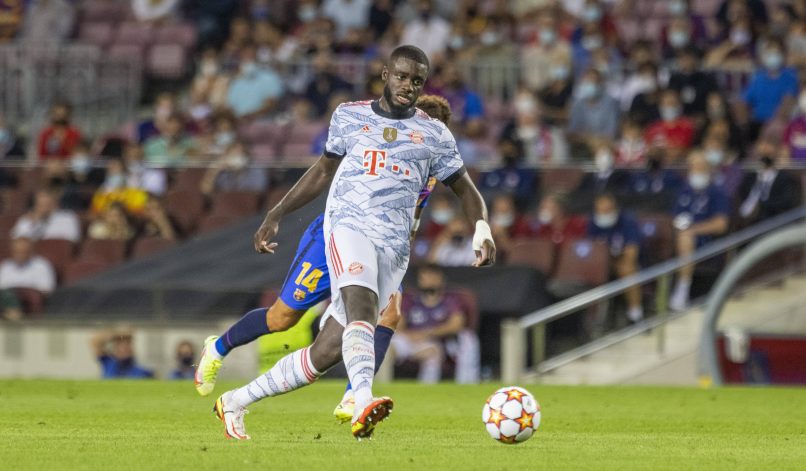 In an interview published in today’s L’Équipe, France defender Dayot Upamecano has discussed his arrival at Bayern Munich this summer, where he joined his manager at Leipzig, Julian Nagelsmann.

The 22-year-old, who made his France debut last year, also highlighted the benefits of having a strong French presence at the club, as well as giving his verdict on goalscorer Robert Lewandowski.

On what Bayern Munich had meant to him before arriving

Even from the outside, I was always under the impression that Bayern was like a family. They all play together, win or lose. I was struck by their mentality, it’s true that all they think about is winning. For five years I watched them win many titles, they even stopped me from winning some, and it was often a great battle.

On deciding to stay in Germany

I sat down with my entire family and I made that decision. I spoke with many people here and they told me good things about the club. It’s what I had in my head as well, I didn’t want to go anywhere else even though I had offers. Bayern remains one of the best teams in the world, it’s a club that wants to win all of their matches and that corresponds with my own ambitions. Plus, I’m still French in my head but I like Germany. I like the people here.

He has his own style of play, as we see at Leipzig. He wants us to play forward quickly, with lots of possession. Even as a defender, I have to be involved in the play. We have to be active and always want the ball. [I also have to] defend well, obviously, and try not to concede. So far it’s going well.

He’s helped me in a lot of departments. He likes video sessions, and we used to do a lot of them back at Leipzig. He would tell me what I was doing really well, where I could improve, and I like having a coach that shows me my weaknesses.

On the French delegation at Bayern

We go out for dinner whenever we can. With Lucas [Hernandez], Bouna [Sarr], Tanguy [Kouassi]… all of us French people often go out as a group. But then we also go out with the Spaniards, the English speakers – Bayern is a mix. I speak with the Germans as well, the squad has to mix together, it’s important for the atmosphere. But the fact that there are so many French people here is an advantage, especially consdering I already knew a few of them in the national team.

On being a teammate of Lewandowski

You’re better off being in his team than with the opposition, that’s clear. I think he impresses everyone. He’s one of the best in the world and I get the impression that he’s not tired of it, he keeps looking to go higher. I don’t want to tell you everything about him, but his finishing is exceptional, his movement as well. He’s there at the right time, and has the physique to go with it. He really has everything.

He’s also very good, and he’ll also carry on developing. It’s always been a pleasure for me to face him. You always have to be ready and attentive when taking him on because he always goes round the back of the defenders. And he always wants to score, second goal, third goal, he never stops.

On other talents he’s seen at Bayern

There are so many good players at Bayern! If you ask me which, I would say the whole team. Among the young talents, you have Jamal Musiala. At his age, what he’s doing is impressive and I hope he’ll carry on developing. He will become a very good player. He’s very slender but you have to look at his technique. He rarely loses the ball.