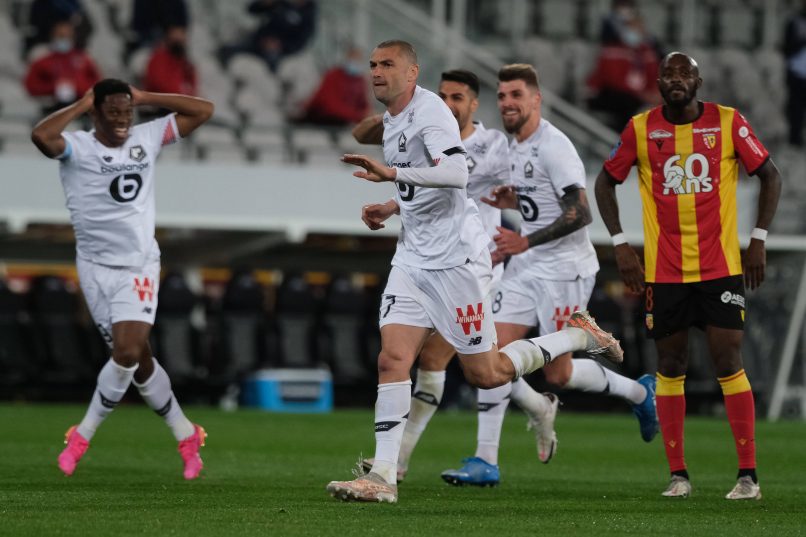 After a weekend in which the top four, save Lille, held serve to keep the race for the title and the Champions’ League tight, Ligue 1 approaches its final matchday in a state no different from how the penultimate round was poised. Crowd favourite Lille need only to beat Angers to capture a well-deserved title, but behind Les Dogues lurk Paris Saint-Germain, with the knowledge that a win and any slip on the part of the leaders will mean that the capital side, for all of the tumult and stress they have endured this season, from the dismissal of Thomas Tuchel to the agonising will-he-won’t-he that surrounds a potential departure on the part of Kylian Mbappé, could still end the season with a domestic double.

Monaco and Lyon are still locked in a battle for the league’s final Champions’ League place, following a shock win in the Principality last month by Rudi Garcia’s side. Even the battle for the Europa League remains tight; although a late victory for Marseille vs Angers last Sunday seems to have given the southern side the edge, Rennes and Lens, who host Monaco, will still each want to cap their seasons with a European place. At the bottom, five teams can all be consigned to the relegation play-off spot after Nîmes were officially condemned to a return to Ligue 2 last weekend following their loss to Lyon.

But to Angers first, where Lille will hardly have an easy time of things. The leaders will be missing their captain and ever-present in defence, José Fonte, unless an appeal to the CNOSF sees his suspension overturned (LOSC are arguing that one of the three yellow cards the player received resulting in this ban was not logged properly by referee Benoît Bastien). LOSC will also be facing off a side who are playing the final match of Stéphane Moulin’s 10-year reign as manager. Even if age had started to catch up to his side to some extent this season, Moulin’s achievements in not only getting Le SCO promoted but in making them an uncomfortable opponent throughout their spell in the top flight has made him somewhat of a club legend, and his squad, long in the tooth, will be all too eager to send their manager off in the best possible way.

That’s not to suggest that Paris Saint-Germain will have things any easier as they take on Brest some 400 kilometres further west. The hosts may also be preparing to say goodbye to an iconic manager in the form of Olivier Dall’Oglio, who has an agreement in principle to join Montpellier and whose insistence on attacking football has made his teams consistently impressive. Their own second half to the season has been poor indeed; only bottom side Dijon have won fewer matches in the calendar year. However, SB29 have the possibility of relegation to avoid and therefore something more tangible to play for than Angers.

Lyon, who need a win and for Monaco to drop points, will host Nice in a repeat of the final fixture of the 2017/18 season, another game that Les Gones needed a win in to secure a Champions League place. Lyon have looked imperious since being stung by Burak Yilmaz’s late winner at home, scoring a dozen goals in their last three matches. With Nice sitting comfortably mid-table, a win for Lyon in Memphis Depay’s swansong seems likely, even though it may not be enough, given a Monaco win equals lights out on OL’s UCL hopes.

The Principality side will face Lens, a team who, despite having a COVID-19-ravaged squad to muddle through with in recent weeks, last week’s loss to Bordeaux the latest disappointment, have showed time and again that within a match, they will fight until the final whistle. Moreover, with a place in the Europa Conference League on the line, Franck Haise’s charges, led by newly crowned Prix Marc-Vivien Foé winner Gaël Kakuta, as a newly-promoted side, also have something marvellous for which to play. Niko Kovac’s outfit looked bereft of ideas and exhausted during Wednesday night’s Coupe de France final loss.

ASM have no doubt been one of the best teams in Europe of the calendar year, but what is a very young team have largely enjoyed the luxury of being the hunters, rather than the hunter. The pressure on this young side, and knowing anything less than a win will likely leave them on the outside looking in when it comes to the Champions League, could be a step too far. Despite the immense strides that this team have made in such a short period of time, perhaps a place in Europe’s top competition would come disadvantageously early for next season anyway.

Marseille go to Metz with fifth place all but secured — their opponent have had a strong season, but their own fade has been somewhat precipitous, winning only one of their last six matches. Marseille need only a point to be absolutely assured fifth, and with it, a place in the Europa League group stage. A spot that will offer a great deal of validation for Jorge Sampaoli even as his squad faces a not-insignificant restructuring this summer, as Boubacar Kamara and Duje Caleta-Car are both likely to follow Florian Thauvin in exiting the club. Rennes, meanwhile, could still pinch sixth if they better Lens’ result against Monaco. With Bruno Genesio and his charges hosting already relegated Nîmes, three points is in order, and should be enough to see European football return to the Roazhon Park next season.

In the battle to avoid the relegation play-off place, permutations abound, and Nantes, winners of four straight matches, look well-equipped to make it a fifth straight victory and lift themselves to automatic safety, buoyed by the fine play of Randal Kolo Muani and Ludovic Blas, as they host Montpellier. Elsewhere, Lorient and Strasbourg face off knowing that a draw between them will see them both do the same, provided PSG do indeed beat Brest. Reims and Bordeaux are also facing off, but only FCGB can be drawn into the play-off place, despite SDR dropping off badly since the announcement that coach David Guion will depart next month.

Indeed, of the 10 fixtures being played simultaneously on Sunday evening, it’s only the match between Saint-Étienne and Dijon that has nothing riding on it. Thus, while the race for the top four remains compelling in both England and Italy, and La Liga can point to its own gripping title and yet-to-be-decided relegation battles, It’s Ligue 1 which harbours the lion’s share of intrigue ahead of the final round of fixtures. In what has been a challenging season owing to the global health crisis and the fallout from the LFP’s television deal collapsing, France’s top flight has responded in no uncertain terms to underscore that far from it being a “farmer’s league,” it remains a hotbed of talent, both established and up-and-coming, tactical innovation, and drama, and it all looks set for a delicious dénouement come Sunday.