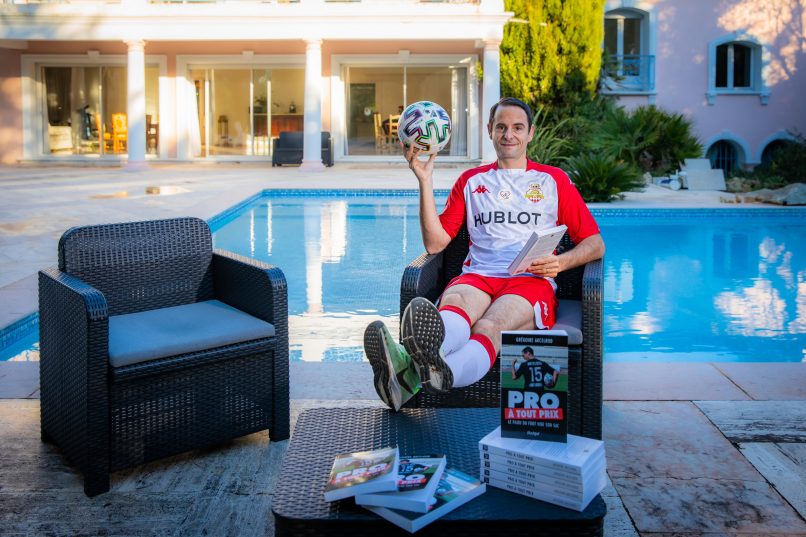 “I’ve worked hard for this,” says a warm, friendly voice from the luxury of a beautiful Côte D’Azur house. The background of our video call is breathtaking.

Like so many children, Akcelrod had a dream to one day become a professional footballer. The only problem was that Akcelrod was “not very good.”

But his story of relentlessness, persistence and self-belief led him to a career spanning 19 countries, five continents, littered with opportunity, rejection and a career-ending lunch.

Akcelrod grew up in Paris to a wealthy family where money was no object. His family had plans for him which included going to work in a suit, and running a company. Football was not part of the equation which led to a rebellion of some sort.

“People think when you are rich you have a good life, but the truth is, we were rich, but we had a bad life. When I was young it was always about family and business, but I got bored of my parents. Playing football with my friends was the only good time I had during the week.”

“My father had no interest in football and told me that he did not want me to be a footballer. I didn’t say this to him, but I thought, when I’m 18 I will do everything to show you that you are wrong, and I will become a professional footballer.”

“I was a striker, I was bad, I was fat, I had no quality, all I had was the love of the game. I played alone in the garden sometimes from 5pm – 8.30pm. I improved a little bit technically, but I wasn’t good, I wasn’t even average.”

But this did not deter the boyhood Paris Saint-Germain fan from achieving his dream against the wishes of his parents and he went about finding a unique way of promoting himself.

“I was 17 at boarding school, one weekend I went to the computer room to make a joke with my friends and create a website. I copied a Nicolas Anelka article from L’Équipe talking about how all the big clubs want him. I changed his name to Akcelrod to make the article about me. It was so professional, and all my friends believed it.”

One year later Akcelrod sent a letter to all the big clubs in England requesting a trial and it was Swindon Town that eventually offered him a two-day stint.

“I didn’t know what to expect. During the trial I trained with professional players, I was not fit at all, the coach took me out after 15 minutes after I took a shot right the face, everybody laughed.”

Only 11 trialists were invited back for day two and although Akcelrod was not one of them he still turned up to training. When asked what he was doing there he replied, “Ah sorry my English is bad, I’ve changed my train and hotel for you.”

The cheek and persistence rewarded Akcelrod with a further day of training but it went no further.

“I came back with a dream, I wanted to do it again, I was improving.”

But the dream came at a price, Akcelrod’s father gave his son an ultimatum; either he was to leave football, or else he will ensure he goes without money.

Akcelrod responded, “I want to have my dream, I don’t care, I will do my life.”

Overnight he had gone from a five-star life to living alone in a small Paris apartment and for the next 12 months, he worked at McDonalds whilst playing amateur football locally.

Akcelrod once again got out his pen and paper and wrote to clubs to rekindle his dream.

Successful trials led to paid stints in Belgium and Cwmbran Town in Wales where he was able to add weight to his ever-improving resume.

“In 2006 I was watching France 3 television channel and saw that PSG were looking for players for their amateur teams, so I made contact.”

“I trained with PSG’s third team for a week and they were happy with me. I got an injury that kept me out for a few weeks but when I came back, I was told I was not needed because they had found another player to take my position. I was so depressed.”

Akcelrod, felt that whatever level that he was playing at for PSG, having the club on his resume would be good for marketing himself.

He went on to sign for the capital club’s fifth team before an opportunity in Argentina presented itself.

“I went on trial with Tigres, a first division club and played in the reserve team. The people were so passionate, it felt like a family, a much better atmosphere than at PSG where people were stealing things.”

His time in South America was short-lived. His agent asked him if he would like a shot at playing in Europe again and the chance to play in the Champions’ League.

“My agent sent me to Bulgaria to trial for CSKA Sofia. I attended a pre-season training camp with the team in Vienna and after 3 days he said Greg they want to sign you: a three-year contract and a salary of 15,000 euros a month. Of course, I said yes.”

“The next day club representatives came to my room and took a picture of me with the CSKA shirt. It was for the website next to the headline ‘CSKA sign Akcelrod’. It was done, I was due to sign the contract the next day.”

Disaster and heartbreak came later that evening when a fan of CSKA Sofia was informed via an online PSG fan forum that Akcelrod was a fake and never played for the club.

“The CSKA fan informed a journalist in Bulgaria and when I woke up the next morning, I saw my face in the newspaper but I didn’t understand the writing.”

“When I arrived to sign the contract, nobody spoke to me. I was told Greg your taxi is waiting for you; you are going back to Paris. I was so disappointed.”

Brief spells in Greece and Kuwait followed, before Akcelrod signed a professional contract in Canada with Mississauga Eagles.

Akcelrod’s career innocuously came to an end at the age of 28, during a trial with Chinese Super League club Henan.

At a lunchtime meal, Akcelrod was unknowingly served a plate of dog and rice.

“I went to my room and I was sick for 3 days I couldn’t even drink. On the fourth day, I had my trial and after 1 hour they told me I wasn’t good enough. I had no energy. I finally said to myself I don’t want to be a footballer anymore.”

Akcelrod, who admits he has not spoken to his dad in 20 years, now works as a football agent helping undiscovered young talent get opportunities and has succeeding in his clients obtaining trials clubs such as Liverpool and Aston Villa.

He knows his story is unique and it is soon to become the subject of a US documentary.

“It’s easy to find talented players like Neymar and Mbappé. They all have the same life. At 15 they have the academy, at 18 they are in the first team, at 20 they are internationals. But to have someone who has zero talent and become professional, it’s unusual.”

Akcelrod has released a book entitled Pro A Tout Prix that showcases his experiences in football across the globe. The book is available in French with plans to soon release it in English, Spanish and Italian.