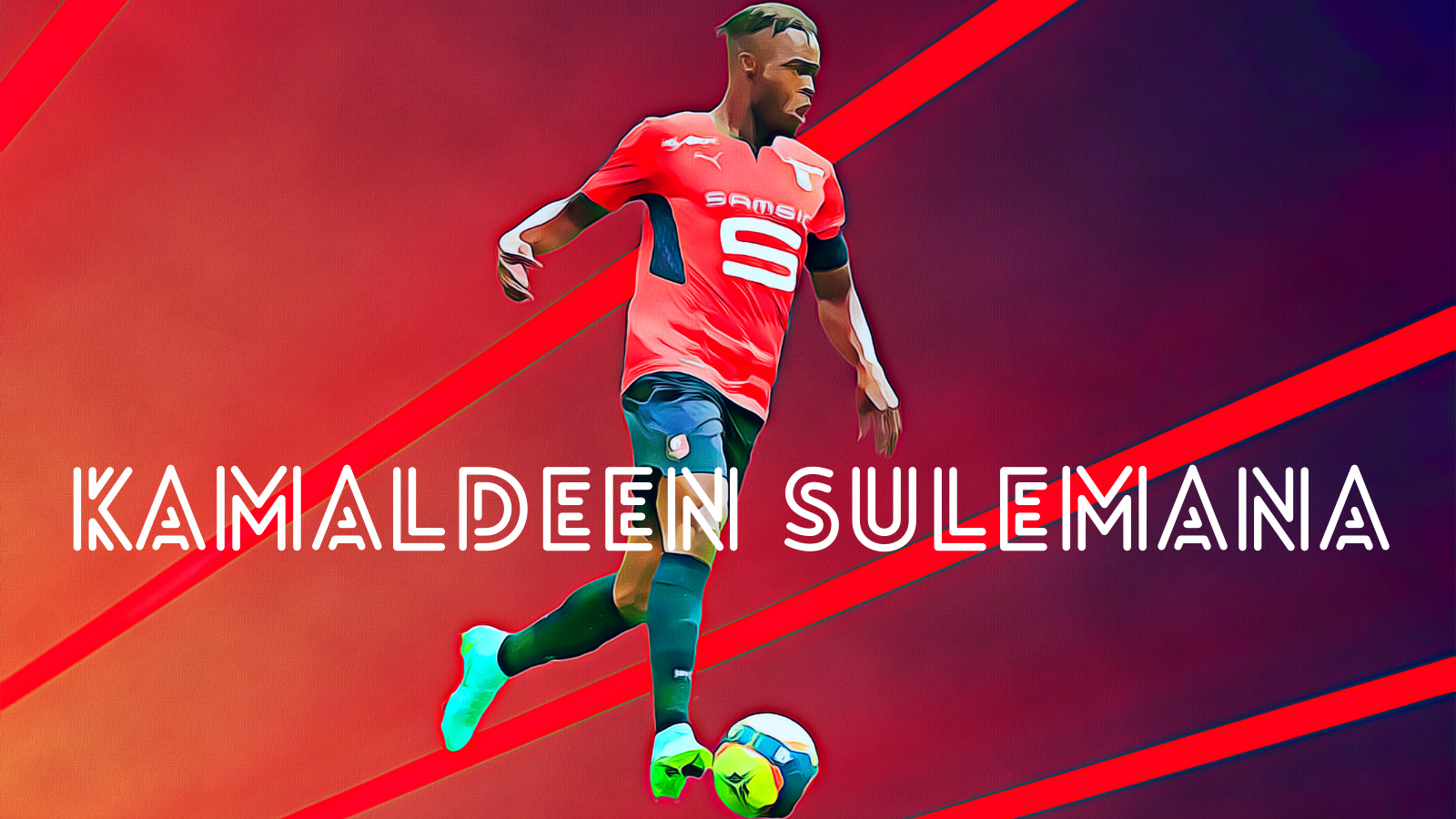 Rennes’ summer transfer window showed intent. With the full backing of the club’s hierarchy for the project that former Lyon partnership of director of football Florian Maurice and coach Bruno Genesio are trying to build, more than £70m was spent by Les Rouges et Noirs on top talents including Lovro Majer, Gaëtan Laborde and Loïc Badé. But the transfer that caught the eye of many was the £13.5m spent on Ghanaian teenage winger Kamaldeen Sulemana from Danish club Nordsjaelland.

As a relatively unknown quantity, questions arose when Rennes broke the Danish Superliga transfer record to secure the teenager’s services. However, during his time in Denmark, Sulemana showed he could turn out to be an astute investment for the Breton based club. His impressive end to the 2020/21 season was one of many reasons why Ajax and Manchester United were also linked with the player before he made the switch to northern France.

Ahead of the Danish top-flight being broken into two halves for the final part of the season, Sulemana’s early form in the regular league season last year will have left fans of Nordsjaelland wanting more. The Ghanian only managed two goals in the main league stage of the season in 2021 before the championship group broke off in April. Knowing his ability to score and create, this will have been disappointing for all parties, especially with some of Europe’s biggest clubs linked with acquiring the player’s services.

Despite this slight dip in form in the early stages of 2021, he thrived when it came to the business end of the campaign. In the Championship stage of the Superliga, Sulemana featured nine times for the former Danish champions and it’s safe to say that he was the star in those matches.

The 19-year-old netted six times and assisted twice in a stellar run of form for a Nordsjaelland team which eventually failed to qualify for European competition. Scoring five times in five games, including a brace in a 4-3 win against Randers, at the start of the championship round saw Sulemana named the Superliga’s player of the month for April. After such a run, fans of the 2012 title winners will have known Sulemana’s time at the club was coming to an end.

Since he arrived in Normandy, Rennes have benefited from typical sparks of brilliance as he continued his run of form at the end of the 2020/21 season. Although the step-up in level to Ligue 1 has undoubtedly meant that the Ghanian has had to acclimate to a higher intensity of play and a more physical style, this hasn’t stopped him from producing.

Sulemana’s game has a specialist skill – dribbling. Ligue 1 fans have been treated to many a thrilling moment since his arrival with the Ghanaian international often taking off on foraying runs or tormented opposition defenders with his skill. Confidence is often linked to players who attempt lots of dribbles, but Sulemana has the execution and efficiency to back up that belief in his ability.

As of mid-December, the versatile forward has averaged over four dribbles per 90 minutes (4.41 at the time of writing) since he arrived in Ligue 1 which is only beaten by PSG’s world record signing Neymar. This effortless ability to carry the ball forwards, embarrass defenders and start attacks makes him one of Europe’s outstanding dribblers – ranking in the top one percent for dribbles completed and players beaten per 90 minutes.

Prolificity in front of goal is another part of the Ghanian’s game which has flourished in his first six months for Les Rouges et Noirs. Sulemana has managed five goals in 25 appearances in all competitions so far, which may not seem like such a high total but when you look into the number of shots he’s taking and how he’s scoring these goals, it’s a good return.

Sulemana is averaging one goal per 246 minutes of Ligue 1 action, a figure not unsatisfactory for a player operating wide left or wide right of a stand-alone striker. A goal every three games is impeccable for most players, never mind someone who’s just 19 and making his debut season in one of Europe’s top five leagues and in European competition too.

The frequency at which he’s scored during his first six months of Ligue 1 action is impressive, but his efficiency in front of goal is even more so. An efficient finishing ability is rare but Sulemana seems to have it in abundance. In Ligue 1, Sulemana has had six shots on target in his first 16 appearances which resulted in four goals – a success rate of 67%. He’s also massively outperforming his xG which stood at 2.1 after 16 matches.

The manner in which he’s scored his goals is impressive as well. On his debut against Lens, he cut inside after beating his man and curled a superb strike home off the post, announcing himself to Ligue 1 with a bang. However, a goal against Metz typified Sulemana’s style. After bringing the ball down with an excellent first touch, he teased helpless Metz defender Matthew Udol and beat him with ease, before unleashing a beautiful strike that sailed in off the crossbar.

The selfless side to Sulemana’s game is something that often goes unnoticed. From a creative perspective, he’s often involved in linkup play and transitions, which isn’t surprising considering the dangerous positions he occupies thanks to some excellent dribbling and positioning. An assist came in a standout performance against PSG which ended Mauricio Pochettino’s side’s unbeaten run at the start of the season. In addition, from a defensive perspective, he also presses effectively and often wins the ball back in front of the defence, which leads to enticing counter-attack opportunities.

2021 is the year that Kamaldeen Sulemana announced himself to football fans globally for both Rennes and Nordsjaelland and, at just 19, he’s destined for big things in 2022 and beyond.

FEATURE | A modern forward who has it all, 2022 could be a big year for 19-year-old Arnaud Kalimuendo